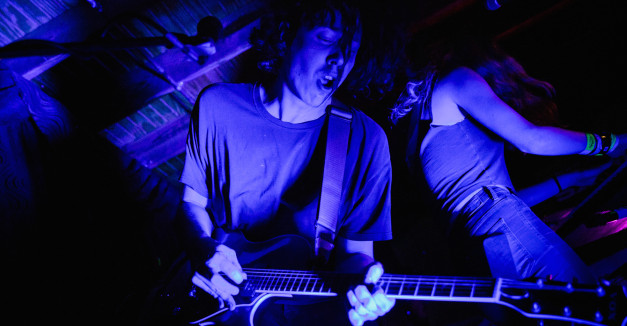 The futuristic synths of Icky Blossoms’ second Saddle Creek record, Mask, don’t match the idea of its curation in a secluded lakeside cabin outside Omaha. But think of using a setting that is often reserved for clarity and team-building retreats, and that’s how the record was born.

“When we started writing the second record, we wanted to capture the ‘band’ aspect of the band,” guitarist/vocalist Derek Pressnall says. “We would go to this lake cabin and spend multiple days out there just kind of holed up, being weirdos and playing guitar, drinking boxed wine and writing music.”

Guitarist Nik Fackler says that in the writing process, sometimes another member of the band would even take an original song and change the lyrics entirely. This offered a new perspective and inspired the original writer to write further on a certain subject.

“For me, the lyrics come naturally based on the atmosphere you’ve created,” guitarist Nik Fackler says. The foundation for an Icky Blossoms song starts with the beat or bass line to create the groove. Then, Fackler says, the build on top of the beat creates the emotional tone for the lyrics to sync with the beat.

Following a busy touring schedule, Icky Blossoms finally celebrates Mask tonight at The Slowdown after nearly a month since its release. Eric in Outerspace, BOTH and Thick Paint open. RSVP here.

Pressnall says the bulk of Mask was recorded in spring of 2014 at ARC with Mike Mogis, a year before its actual release date. He says they used that time to write more material that fall, and added “Spiral” and “Away From You” to the record before its May 2015 release.

Pressnall calls writing Mask a “deliberate process” in which he, Fackler and vocalist Sarah Bohling spent days at a time on the retreats, writing solo on individual songs before switching and collaborating. This is different from Icky Blossoms, where Bohling was added to the band midway through the record’s writing process.

“The first record was exploring and trying to write different types of songs,” Fackler says. “There was a lot of exploring with the keyboard and programming different beats.”

The sophomore result is a wider spectrum of genres, from bright dance-pop to darker, Faint-like progressions. On the light end in particular, “Wait” carries a summer nostalgia similar to The Naked and Famous to the point where one could see it blasting throughout a trailer for a feel-good teen love story.

On the other end of the Icky spectrum, “Silver Tongue,”  is irritated and features Fackler’s gritty punk vocals. The aggression comes from “frustration and anger” of trying to find a place in the world and having so much against your goals, Fackler says.

“When the crowd is right and you’re just having a magical conversation with the audience,” Pressnall says, “that song can just get you out of your body.”

Bohling’s deep alto croon still hums with the rolling bass lines, but on songs like “Living In Fiction,” she reaches for higher notes that she shied away from in 2012’s debut. For example, as she wails, “I don’t really want to talk. I don’t want to do this shit again,” she conveys exasperation and surrender.

“We really wanted to showcase Sarah as a singer and just wanted to bring that singing aspect to our shows,” Pressnall says. “The first record has a lot of monotone-y, chant-y vocal styles, which is really cool. But I think after playing those songs at a lot of shows, you’re looking for something new.”

You won’t find another sinful party anthem like “Babes” or “Sex to the Devil” on Mask. The lyrics on the record stray away from single-subject tendencies and work on creating a more emotional base for the dance beats to find a setting.

Pressnall calls the debut record “very simple, very stripped-down,” and although Icky Blossoms may sound significantly dressed to the outside ear, his statement is synonymous with the band’s maturation on Mask.

“We wanted to represent us as songwriters, but also us as musicians.”