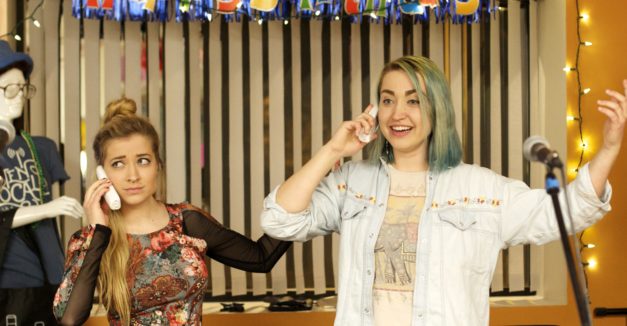 Omaha is home to a small contingent of sister acts right now. Christine and Orenda Fink of High Up, Andrea and Kara Purdy of Field Club, Renee and Roselle Ledesma of Dammit Daniel, KP and me (AYGAMG). Barely a year out on the public stage, Jessica and Heather Hottman are making waves in that pool as well, releasing the debut Hottman Sisters EP This Two Friday night.

I sat down for a little more than two hours with the sisters Hottman at Caffeine Dreams on a mostly quiet Wednesday night — well, save for us. Our conversation started as if we were listing the stats on a baseball card: Heather is the older of the sisters. Jessica is the sillier. Both were born and raised in Omaha. They, along with third sister, Tiffany (who can be heard on the EP), were taught how to harmonize from their mother, who had them singing four part harmonies to songs like “Take Me Out to the Ballgame.”

After college, Heather moved to Nashville for a short stint. A call from Jessica, asking her to come home and work on an album, brought Heather back. Their first show playing electric guitar and synths was the Sofar Sounds backyard show with Frontier Ruckus and Matt Whipkey less than a year ago.

Often compared to indie pop sensation Lucius because their in-unison vocal layering (and their occasional cover), The Hottman Sisters equally evoke those timeless, seamless vocal harmonies of The Andrews Sisters. Their playful experimentation with percussive vocals, emphasizing pauses and pronunciation are telling in their similarity to artist Kimbra (and for whose voice Jessica’s is a dead ringer).

The sisters talked with me about the music, faith, handling sisterly conflict, playing with your best friend, and dreams for the future of The Hottman Sisters.

HN: (To Jessica) Do you do all of the songwriting?

Jessica: Yeah. I do. I’m kind of a freak about it. It’s funny. Sometimes Heather will come home and my hair is a mess and I haven’t brushed my teeth or taken any amount of care of myself and I’m like, “I wrote it! I figured it out!”

Heather: She’s like a mad scientist in her lab!

J: Heather’s like, go shower and eat something–but like, it all comes and goes in spurts. For most of the songs on this EP, they were written within weeks of each other, sometimes in the same day.

H: You say spurts, but sometimes this will go on for longer than twenty-four hours!

HN: Like Dolly Parton writing “Jolene” and “I Will Always Love You” in the same day? Doesn’t that just make your mind explode?!

J: I really enjoy it, and it’s my favorite. I’ve already started writing again. We’re talking about maybe putting another project out this fall, we’ll see. I’m about five or six songs into that one.

HN: What does that look like? Is that a Hottman Sisters project?

J: It’s definitely a Hottman Sisters project. It’s the natural progression of who The Hottman Sisters are. I was talking about this with Adam [Roberts]. It’s like this EP is just a sampler platter, and the goal for the next one is to be more of a meal. I think it’s going to be something different. Maybe thematic. The harmonies will still be there, that’s the Hottman Sisters characteristic.

H: We just can’t stay away from harmony is what it comes down to.

J: That is the center of it all.

HN: Please never apologize for that. …I wanna do a sister show someday. Just take out a whole afternoon. It’ll be us [Hottman Sisters and AYGAMG] and High Up and Field Club and Dammit Daniel and it would be so great.

J: I was talking to Christine or Orenda [Fink] and we were were saying, “Oh sisters, [rolls eyes] heh heh heh…yeah, you know what I’m talkin about.” There’s just like this unsaid bond.

H: That’s actually like one of the best parts, whenever we have conflict. It’s one of my favorite parts about playing music. It’s that, [Jessica is] up there with me. There’s this chemistry that happens and sometimes it even baffles me. And it’s usually one of three reactions. Sometimes I’ll be so happy I might shed a couple tears. Or maybe I’ll be hysterically laughing. Or there’s just this moment that we have…and I love it. Yeah, and I think it happens at least once every show.

J: Being in the world of sisters and music there are people that come in and are like, “Hey, do you wanna try this solo project thing with me?” And we’re just like…

The Hottman Sisters release their debut EP This Two tonight at Reverb Lounge, 6121 Military Ave, with Miwi LaLupa and Walk By Sea. Tickets to the 9 p.m. show are $7. RSVP here.

Rebecca Lowry is the frontwoman of All Young Girls Are Machine Guns, founder of Benson First Friday Femme Fest and a regular Hear Nebraska contributor. Reach her through HN’s managing editor at andrews@hearnebraska.org.