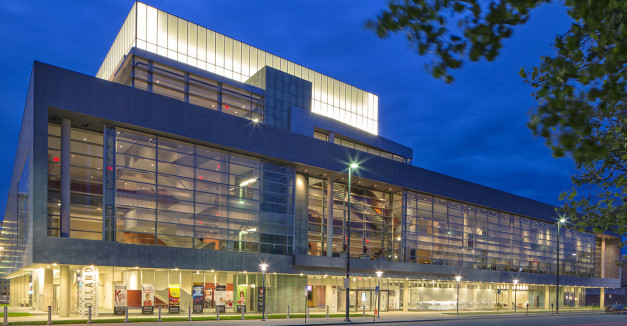 The first time I experienced the Holland Center, I remember it feeling much too nice for me to be there.

It was October 2009, and my friends and I were there to see folk/rock supergroup Monsters Of Folk. As a Kansas City native and sophomore student at the University of Nebraska-Lincoln, I arrived ignorant of not only the cultural importance of the gleaming concert hall, but also its grandeur.

Throughout roughly two and a half hours of music (including Conor Oberst playing a handful of his own), both elements became readily apparent. I also remember the clarity of the sound, and my surprise that a room of that magnitude was hosting a rock concert.

In the week leading up to Holland Stages Festival, its versatility and aesthetic still resonate clearest. Over 10 years, the Holland has stood as a beacon of the arts in Omaha, curating a diverse mix of programming and helping the city foster a positive cultural atmosphere. Its warmth and welcoming environment has helped reach myriad audiences.

Oberst returns to the headline Omaha Performing Arts’ 10th anniversary celebration of the performing arts center this Saturday (RSVP here). The free, all-day festival features an eclectic roster of family-friendly local and national performing arts. Throughout the day, audiences will hear the down-home sounds of Lincoln’s Root Marm Chicken Farm Jug Band on the same stage that will later host the African Culture Connection. They’ll see acrobatic dance company Bandaloop swing from the east wall of the Holland and be treated to a Daniel Bernard Roumain-led structured improvisation with the Omaha Area Youth Orchestra and the University of Nebraska-Omaha marching band.

Much of the Omaha music community is involved, as Omaha Under The Radar, Loves Jazz & Arts Center, Maha Music Festival, House of Loom and Hear Nebraska have curated stages throughout the day. Find the entire schedule here.

We reached out to some of Holland Center’s community and industry stakeholders to learn why they the venue is so important. Read on for their thoughts and finest memories from the performing arts center.

“It has been a joy and a thrill to watch downtown Omaha evolve into the cultural heart of Omaha, and The Holland Center has been a massive part in making that happen. It really was a game changer for the city of Omaha. What was once a mostly-abandoned area is now a walkable, active space filled with creative energy. It’s an energy that locals and visitors alike can sense. From the perspective of an artist, feeling that the arts are celebrated in your community is life-affirming and motivating. Knowing that there are beautiful spaces to present your art encourages us to produce a higher level of work, to elevate our craft, and work that much more diligently to connect with our audiences with a quality of performance that a space like the Holland Center merits. And, from the perspective of an audience member, having access to world-class artists and touring acts is vital to maintaining our connection to the artistic community at large.

The Holland Stages Festival marks my first public performance at the Holland Center, and I’m ecstatic! I moved back to Omaha in 2012, and it has been a goal of mine to perform at the Holland Center since then. I also had the incredible opportunity to work with young musicians at the Omaha Girls Rock Camp in 2014. Seeing the campers inhabiting the hallways of the Holland Center with guitars and side ponytails, bonding over lyrics and poster printing, reminded me that the arts are our connective tissue, and spaces like the Holland Center provide the platform we so desperately need to launch our creative energies.”

“You know when Omaha is listed in one of those stories like “top 10 American cities for the thalassophobic,” how they usually use a photo of those downtown buildings, the matching red wedges and the Woodman Tower and maybe the tallest bank building? It’s probably fair to represent Omaha as a city of ag-business and insurance and banking, but how I wish they’d use a picture of the Holland Center. Not only is it our most beautiful building, but it’s built only for beauty: as a space for the sublime.

The best, the most sublime for me, was seeing Andre Watts perform a solo piano concert in the Holland’s first season. It was a revelation to hear the concert hall wake up to music.

You hear the hall wake up and get gorgeous during many symphony performances, especially when there is a chorus assembled. Like last season, when all those voices joined in on Mahler’s “Resurrection” Symphony.

But it’s not just the big-time performances there that are great. I played the piano during the cocktail hour of a wedding reception in the lobby last year — certainly the lowest rung of Holland gigs — and the staff is so professional, and the pianos in such great shape, that it was one of my most enjoyable hours playing music.”

“[The Holland Center] has enhanced the downtown artistic landscape. It provides Omaha with a unique performance venue with equally unique performances inside. [It is] considered one of the best sounding concert venues in the country. We love telling visitors, no matter where their seat is located, they will be able to hear everything perfectly. The acoustics are incredible. How many cities can say they have a venue designed after the Musikverin in Vienna, Austria? It just oozes with visions of The Sound of Music.

The first time my family went — kicking and screaming — to the Christmas Spectacular, we walked in and were surprised by the sleek, modern feel of the space itself. You almost feel like you’re inside of an instrument. When the performance began, the music just wrapped around us and we could feel every moment. It was quite powerful for all of us and now it’s become a holiday tradition — my family begs me to go. We’ve been to other high-quality performances in other cities, but the way you feel inside the Holland is beyond compare.

“The Holland Center is one of those must-have cultural institutions of any relevant city. Lucky for us, though, visually, the building happens to be incredibly well done, and has a music hall that takes acoustics to the level of an audiophile.

Of all my experiences at the Holland, it’s not the times I’ve been on stage that I remember the most. It was when Conor Oberst accepted an award from the OEAA’s, and instead of doing the oft-heard cliche of thanking god, his opening remarks started off by thanking the devil.”

“The Holland Center matters because it offers the community a chance to experience creative projects from all around the world, whether it be through music, film, book talks or comedy. All ages are able to experience something at The Holland throughout the year.

The Holland Center is important to Omaha Girls Rock because without them, we would not be able to hold our Summer Camps at the capacity in which we do. They are very generous in the amount of educational space, technology and service during our two weeks there. It is very special for the girls of Omaha Girls Rock to be able to come to such a creative space because it allows for them to feel safer in their expression through music.

An especially memorable moment at camp was when we were able to use the Main Stage for a sound experimentation workshop. The acoustics there are unmatched, and for that reason, the campers were able to experience their sound in a really special way. Not only that, they were able feel what it’s like on a stage and look out into an audience to better prepare them for their time on stage at the end of the week.”