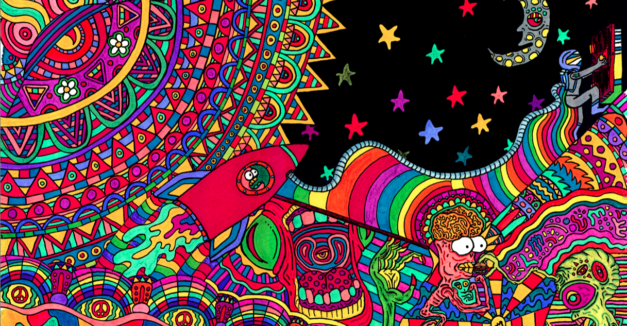 You know that very specific kind of hunger, during which everything in the fridge and pantry looks good? Like, maybe even together? Little bit of peanut butter, maybe some apple, a bit of ham, a slice of banana bread. Distinctly and directly, each component is satisfying in it’s own way; together, it’s an oral and nasal assault.

Thundersandwich’s debut full-length attacks the senses in precisely the same way, sampling bites from heavy metal, prog and operatic rock and synthy funk — most of that in just the first track. When guitarist Jesse Butterfield’s last riff trails off into the ether at about two-and-a-half minutes, “Seizure Salad” reemerges from George White’s flowing synth bath into a flange-laden space opera. “Song Of The Dead” recalls Kansas-level organ swells and Rodriguez-Lopez-esque guitar leads. And when present, vocals reassuringly comfort and ground the listener, as if to remind of the band’s human presence.

All of that makes When Hunger Strikes a genre-jumping pu-pu platter, it’s jack-of-all-trades players — Butterfield, White, bassist Ean Brino and drummer Wayde Dickerson — unpacking the elements of funk and rock apart and reassembling them in multiple, delectable ways. It seems certain the band’s creativity and tightness benefitted from its year off from live performance. Either way, the LP is remarkably satiating when that sudden onset of auditory ravenousness hits, when the desire to stuff one’s face is unconquerable.

For now, dig into HN’s exclusive stream of When Hunger Strikes below: