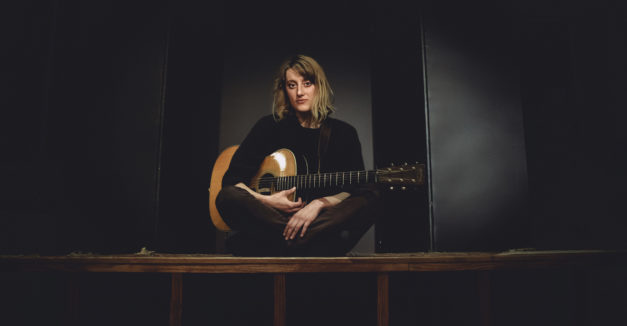 Kaylee Schmutte stands at the back of Seward’s Olde Glory Theater, bathed in the light filtering through the stained glass window which seems to draw attention to the sorrowful, melodic realization that a mistake has been made.

The Lincoln songwriter (and Seward native) performs “Highway” with a mix of tenderness and regret, it’s narrator reversing course on her decision to leave a lover behind and yearning to fix the resulting damage. She is gentle with herself — at 100 miles down the road, all the better — and just as caring and resolute with the rhythmic strumming that mirrors, in whichever direction, her long and bounding journey.

Schmutte has played around the Lincoln and Omaha scenes for a little more than a year now, both as a solo act and with Shit Flowers, which also features Better Friend’s Kalib Faltys and The Ambulanters’ Sam Costello. With both projects, her slow-burning ruminations cut to the anxious core of love and loss.

Watch her rendition of “Highway” below: