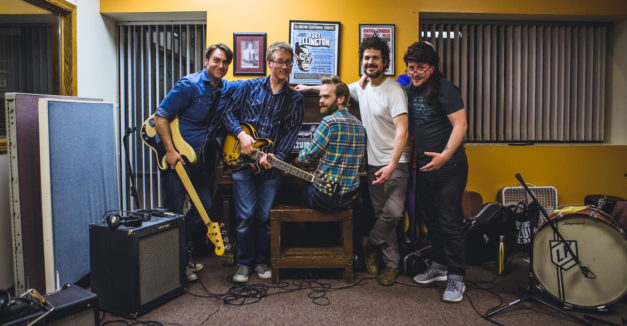 When Head of Femur reunited for the 2015 Lincoln Calling music festival, it felt quite a bit like old times: the original brain trust, its longtime violin player Randy Mollner, a cast of Nebraska players and friends that made the whole production look like one of those PBS world music specials and the jovial, upbeat, grinning energy that accompanied it. If that was post-popularity for a band, from an audience perspective, it looked like the time of their lives, reminding us in one fleeting weekend how and why they reached beyond the Midwest for the better part of a decade.

The formerly-Chicago-based band — comprising Good Lifers in vocalist Matt Focht, drummer/keyboard player Ben Armstrong and guitarist Mike Elsener — had always stretched the compositional bounds of orchestral pop. During a career arc that started in the early 2000s and yielded LPs for New York-based spinART Records and a number of national tours, the trio of Nebraskans found inspiration in the big production of the late ‘60s and early ‘70s.

As they say, the boys are back in town, and that has meant the band’s recent, more stable resurrection headed in a new direction. On Hear! Hear! Tunemaker, its first LP in nine years, Head of Femur shows a more mellow yet still-inspired approach to its expansive sound. “You Don’t Mind” opens serenely, crests dramatically and, coupled with the album title as its two first impressions, drops us squarely within a proposed experience. It’s one largely informed by long-time interests: marrying brass section grandeur and flower power dreaminess on “Physical Sciences” or bopping along the joyride whimsey of “Parallel Lines.” The folksy “22nd Century” keeps the party going and “Stoned Soul” is the ode to its own head-in-the-clouds thoughtfulness.

If this record merits that kind of mouthful, it’s because Head of Femur has always played it that way. Neatly assembling violins, organs, horns and Focht’s food-for-thought, it still achieves the streamlined aesthetic forecasted upon the band’s reunion. The new direction is vibe, and the vibe is a waning Indian summer, a sunny disposition in an injury accident, the last gulp at 2 a.m. There’s value — and urgency — in reunions like these. There’s no time like the present.

So without further ado! Here’s Head of Femur with “Isn’t It A Shame.”