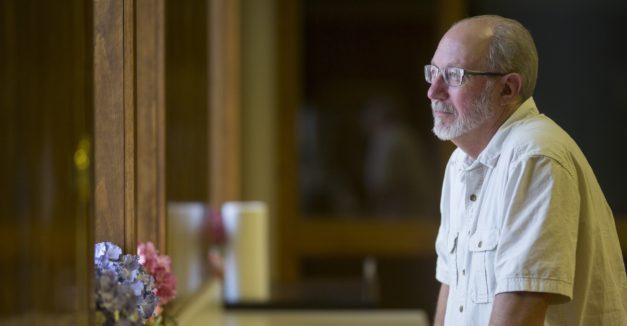 North of Hastings’ downtown, with its two- and three-story buildings squatting around a pair of one-way streets, a handful of century-old churches (Methodist, Catholic, Baptist) stand resolute. These red brick buildings with their towering steeples and ornate stained glass predate the renewed, post-suburban interest in the town’s original center where craft cocktails, locally made art and charcuterie served on butcher block are infinitely more available than they were 10 years ago.

By itself, one of these churches, like the 100-year-old First Presbyterian with its gothic bell tower and 40-rank organ, may seem outstanding. Together with its equally impressive neighbors, however, it makes a quiet and enduring statement about a community that builds and attends such churches.

Here, on a Monday in June, Byron Jensen greets members of the Hastings Symphony Orchestra board of directors outside a large, mahogany conference room. As summer is the orchestra’s offseason, the symphony conductor and artistic director expects the board meeting to be largely uneventful. Still, Jensen is energized.

“We have a very arts-based community here,” Jensen says. “You don’t hear about it much, but there’s an arts-based mentality.”

He goes on to list programs and organizations artistically active in Hastings. Among them: Hastings Community Theater, Boxcar Theater, a brand new arts center coming to Hastings College in August, a handful of galleries. During the summer, the city library is under renovation and two breweries are working toward opening dates. While not exclusively artistic in nature, such developments are indicative of Hastings’ internal cultural vision.

“Taken as a whole, this community has been blessed and very supportive of music and art and art culture,” Jensen says.

Jensen is a professor of music at Hastings College, a school which consistently attracts some of Nebraska’s best musical talents. He’s also conductor and art director for the Hastings Symphony Orchestra, which is the nation’s longest-running amateur orchestra, having just wrapped its 90th season.

The orchestra was founded in 1925 through Hastings College but eventually separated to became an independent amateur orchestra. The orchestra remains in-residence at the school and coordinates its six-concert season with the academic calendar. It was briefly the Hastings City Orchestra, but these days Hastings Symphony Orchestra draws players from both ends of the state and from Kansas. To Jensen, one of the orchestra’s greatest strengths is drawing players from an array of backgrounds and creating expert musical communication between them in limited practice time.

“It’s a multi-generational approach to music,” he says. “This last season we had two ninth graders all the way up to someone who has performed with the orchestra for 76 years.”

Conducting the orchestra, which combines strings, brass, woodwind and percussion instruments, comes with challenges. In central Nebraska where the population is sparse and far-flung, he says fielding enough qualified string players is a persistent problem to solve. Throughout his 12 years as conductor, he’s also seen the audience get older with very few young adults buying season passes.

“We need to have a greater spirit among our younger professionals to become aware of what we do with the Hastings Symphony Orchestra and become more supportive.”

Tall and with a graying beard, Jensen says greater access to sports may contribute to the aging audiences.

“That’s what I need our younger people to understand. Music, especially live music, any live music, is so important to our humanity.”

He speaks his mind confidently and without inhibition. His speech is almost listless on subjects ranging from the day’s minutiae to his self-professed interest in football. It’s for the mention of live music performance that his face fires up with passion and he loses eye contact to stare longingly into the middle-distance, trying to put words to a sensation that, for him, is a wholly visceral experience.

“We need people to come to the concerts and see musicians struggle with music. That’s part of the beauty: see those bows moving back and forth together, see the brass section breathing together. To watch the conductor try to bring all those aspects out of the music.”

Perhaps without knowing it, Jensen is speaking to the enduring character of the 144-year-old railroad town, and to the nontheistic spirit of the old Hastings churches.

Each is first a house of worship, but how exactly it conducts such worship is a potent reflection of community values. In this neighborhood alone, there are multiple bell choirs, children’s choirs, adult choirs, organists and pianists — full music programs, thanks to churches. And, of course, the First Presbyterian hosts the monthly orchestra board meetings. To the north, in the newer part of town, churches host worship bands for their contemporary services. If we wonder where to look for a celebration of the arts, churches have been a reliable starting point for centuries.

As the list of businesses and organizations that include the arts in a statement of values grows in Hastings, and with them the chef-led restaurants, craft breweries, boutiques, etc., Jensen and the orchestra’s presence — and the churches where musicians have long trained, performed and met — can be taken as a reminder that, at least here, the interest is not new.

Art has thrived in this community for decades.