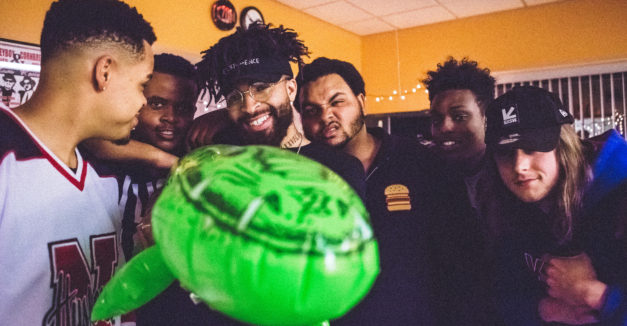 Khaleefa Muhammad’s entry into the world of hip-hop came swiftly and tragically, far away from the beloved Corn Coast he calls home. The Lincoln rapper was living in North Carolina during the early part of this decade, his high school days filled with relative stardom on the basketball court and growing fascination with beats and rhymes in the bedroom — the latter of which he cultivated with a middle-school friend who remained in Nebraska.

But it wasn’t long before his passion for the game began to fade. Knowing his parents’ enthusiasm for his on-the-court endeavors, he grappled with how to break the news that another love had entered his life. Then, suddenly, the friend with whom he had ventured into music passed away unexpectedly. Heartbroken, and already falling out of love with the game, Muhammad faced his parents, looked deep within himself, and has come out the other side.

Muhammad is perhaps better known to Nebraska music as HAKIM, the fast-rising, smooth-flowing Capitol City emcee with a hot streak. He has quickly ingrained himself within the local hip-hop scene, appearing on bills next to the likes of Sleep Sinatra and Both, his exuberant hype man Dey-Jean and the architectural DJ Lex at his side. But because of his chill demeanor and crowd command, he’s capable of shining on any mixed-up local lineup. And it’s not uncommon for their sharing the stage with regional big names like Dizzy Wright and Mark Battles.

For that, HAKIM owes his relatability, unflappability and lyrical mastery. A good chunk of his scorching catalogue is overtly autobiographical, addressing his birth into fatherhood and his personal relationships on the October E. Jacobs collaboration Royale w/ Cheese. But he’s also unafraid to tackle social issues, as on live stand-out “Crazy” or new track “Chanel No 666.”

That last track appears on EXISTintoENCE (pronounced “into existence”), HAKIM’s latest and perhaps most aspirational project to date. It drops through his Our Society movement, which unites himself and Dey-Jean, DJ Lex, producers Q Finesse and Bang Da Beatz, rapper Bucii and manager Don. Together, they forge ahead into Midwest hip-hop with intention and swagger. The front man may have all the right moves, but as with basketball, the supporting cast matters.