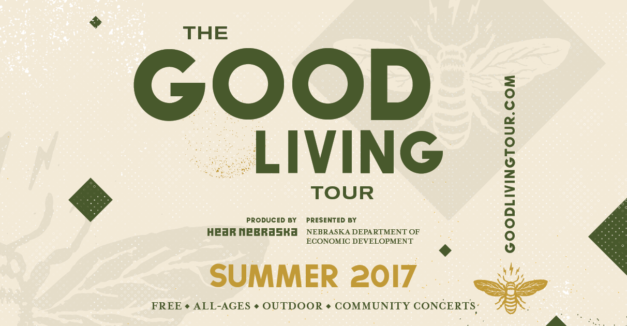 Hear Nebraska is excited to announce the musical lineup for the 2017 Good Living Tour, presented by the Nebraska Department of Economic Development (DED). In all, 30 acts comprise a sonically diverse roster of bands, each of which will perform at free, all-ages concerts in one of eight Greater Nebraska communities: Hebron, Auburn, Imperial, Red Cloud, McCook, Norfolk, Lyons and Hastings.

In its third year, The Good Living Tour kicks off by traveling to two new communities — Hebron and Auburn — and returns to six of its past stops. One of them is Red Cloud, where Heritage Tourism Development Director Jarrod McCartney says the Starke Round Barn concert in 2016 was a hit.

“Beyond just having a good time, there was a real sense of unity in the audience and a feeling of pride in what we were doing,” McCartney said. “As soon as the concert was finished, we were all champing at the bit to get started on bringing it back to town again. The concert helped demonstrate what we’re capable of here in a faraway place like Red Cloud.”

This year, on the day of each concert, Hear Nebraska staff and performing artists will lead an educational workshop designed to give every community the tools and knowledge to increase the presence and support of original music in their community. Topics could include: attracting touring artists; facilitating local music production; starting a sustainable music venue or concert series; helping an existing band expand their reach; and engaging and encouraging support from the community.

“We have a model now, in Hear Grand Island, that exemplifies what we hope the tour can lead to in communities throughout the state and the benefit it can elicit,” Markley says. “This year, we will be putting significant effort into working with community members to ensure the presentation of original Nebraska music isn’t a once-a-year event, but an ongoing effort that is supported and valued by every generation, but especially by Nebraska’s younger population.”

View the dates and lineups for each community below:

Editor’s note: a previous version of this article listed the Norfolk concert as occurring at the Starke Round Barn, which is in Red Cloud. The Friday, Aug 4 concert will happen downtown, at the Johnny Carson Mural.