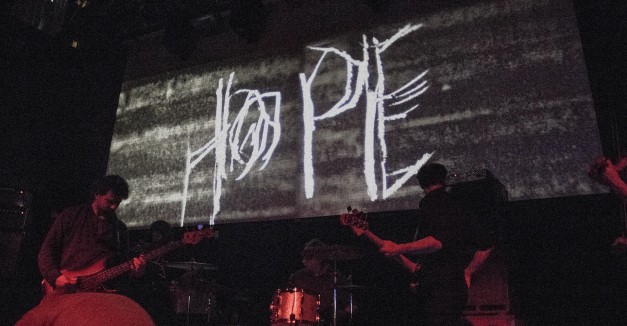 [Editor’s note: this review was written by HN contributor Jeff Lawler. Reach him via HN’s managing editor at andrews@hearnebraska.org]

Slowdown was packed in tight on Wednesday night. Surveying the crowd beforehand, it was apparent that the billing of Godspeed You! Black Emperor and Xylouris White drew in a diverse set of music fans. An interesting juxtaposition: opener Xylouris uses a very minimal setup (a drumset and a chair for the lute player), and the headliner has one of the more complicated rigs I’ve ever seen.

Xylouris White is a curious musical group. Singer and lute player George Xylouris was born on the Greek island of Crete, and hails from a family of famous Greek musicians. Drummer Jim White is best known for his work with Australian instrumental group Dirty Three. Together, they offer up a beguiling mix of traditional Mediterranean folk and avant garde jazz rhythms, creating a sound simultaneously familiar and foreign. 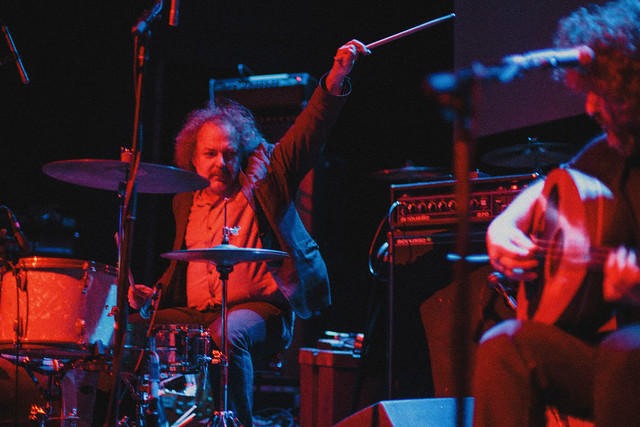 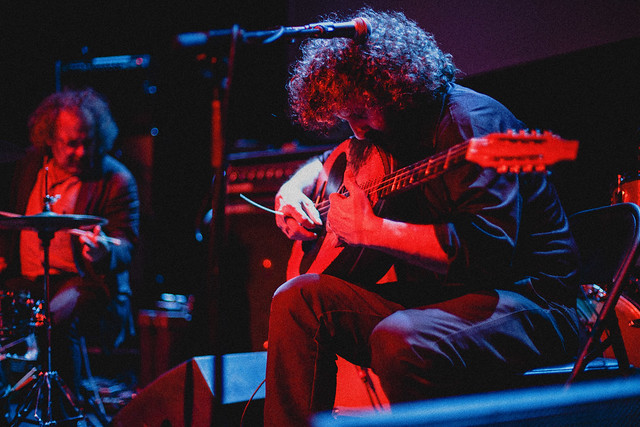 After they ambled on stage, seated right next to each other, the two players broke into a furious set that lasted about forty five minutes, but never lacked for intensity. Jim White is one of the most unique and expressive drummers you could have the opportunity to see. He holds his sticks by the very tips, throwing them this way and that. But for the rhythmic complexity, one might think that it was completely improvised. George Xylouris played the lute with both subtlety and power, working in concert with the drummer to create a wall of noise that was unexpected from two acoustic instruments. On a few occasions, Xylouris would sing a few lines. The vocals were so infrequent that it was almost surprising to hear the Mediterranean and Middle Eastern influenced harmonies floating above the lute and drums. 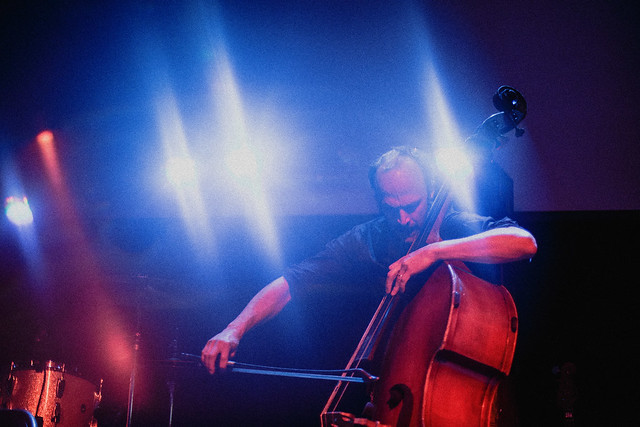 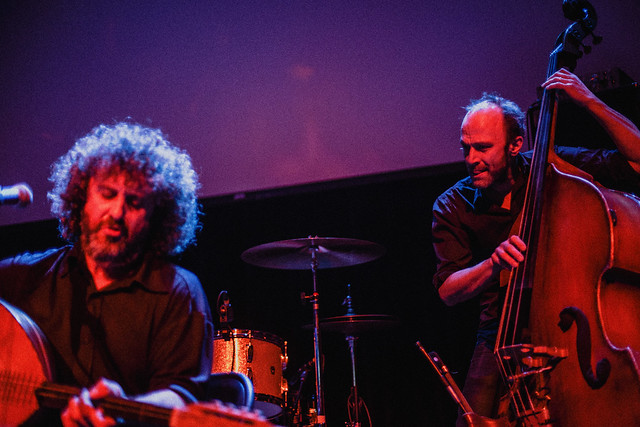 Godspeed You! Black Emperor took the stage a bit before nine. Audience members inspected the three-projector set up behind the sound booth before the show, and admiring the stands with dozens of film loops ready for projection.

The Quebec, Canada instrumental octet is one of the progenitors of post-rock, and still stands out as one of the most adventurous groups in the sub-genre they helped build. Forming in 1994 and taking their name from a documentary about a Japanese biker gang, GY!BE’s membership has waxed and waned over the years, operating more as a collective than a traditional rock band. After three albums in the late 90s and early 2000s, the group went on hiatus before reforming in 2010. It has released two albums since, the most recent being Asunder, Sweet and Other Distress.

After all the gear was set, the lights went down, casting the main room in darkness. A reverberating, synthesized drone slowly became louder and louder, undulating through the crowd to the point where you could feel it vibrating in your chest. A few audience members shouted random words, only to be summarily shushed by their neighbors. 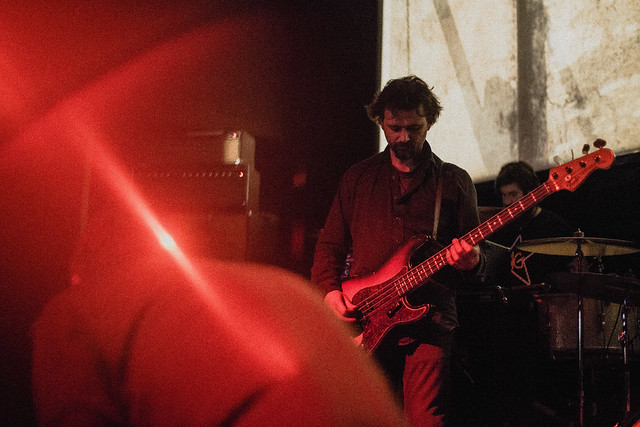 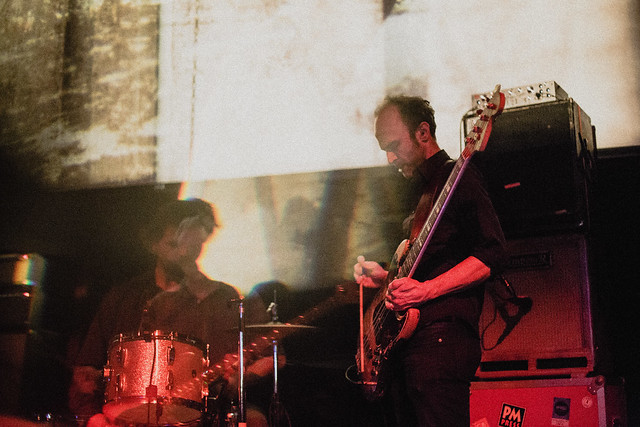 The upright bass and violin players were first to appear on stage, sounding off a few lilting notes before being gradually joined by an additional electric bass, keys, three guitars and two drummers. Static flickered across the screen. Eventually, all the players joined in, pounding away at a single chord, slowly building the energy higher and higher. It felt like riding the crest of a wave that, instead of breaking, just kept growing. The static on the screen eventually came into focus, projecting looped images of everything from a deer in the wilderness to protests in a large city. There was no clear message or narrative; rather, the images seemed to invite audience members to create their own meaning out of the compositions. 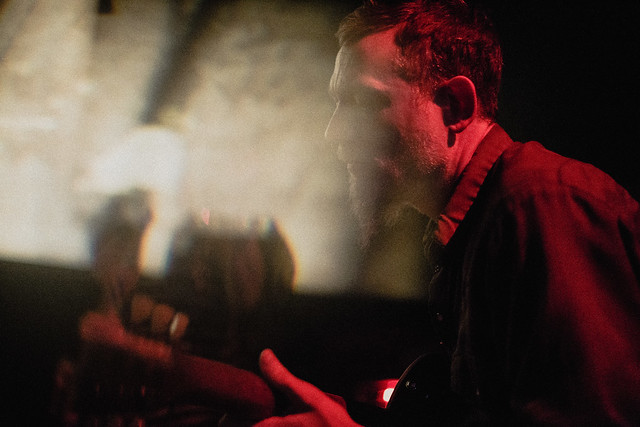 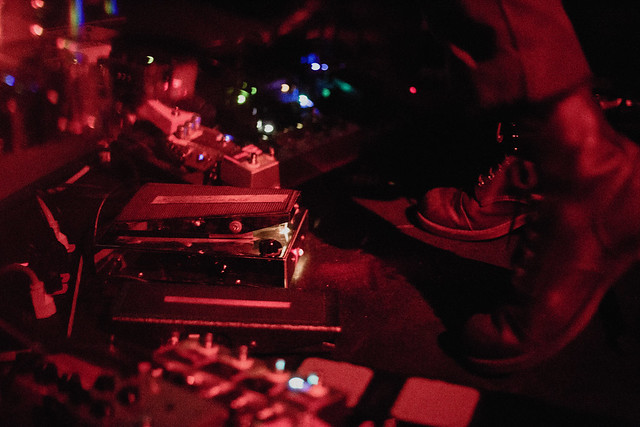 It’s difficult to say with certainty how many songs GY!BE played. All were quite long and bled into another, bridged by ambient interludes laced with feedback. “Peasantry or ‘Light! Instead of Light!’” is mid-tempo with a clear, ringing guitar statement. As with many of their compositions, the group stakes out a clear theme, and then builds, changes, modifies and ultimately destroys that theme in a layer of noise and energy.

All the players were excellent, but it’s hard to single any individual out. GY!BE operates as a cohesive whole, greater than the sum of its parts. There was a distinct lack of individual focus in the setup: the stage lights never got brighter than a dull red, and the projected film loops were far more likely to catch a wandering eye than any of the players, three of whom were seated for the entire performance. 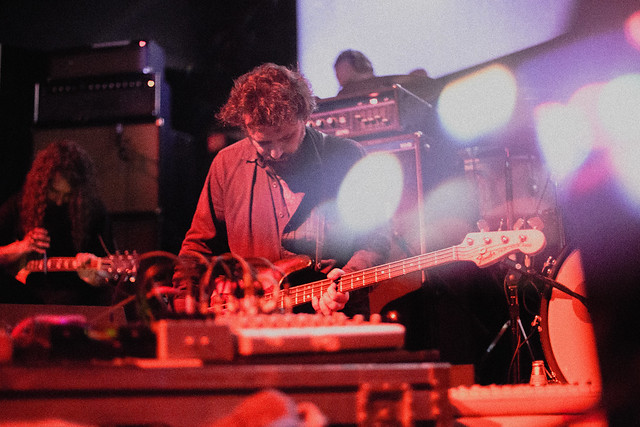 The last song of the night was another slow build to the crest of a wave that they rode for an almost excruciatingly long time. The build, however, was not nearly as intriguing as the deconstruction. After the main portion of the song had concluded, it faded into a wall of droning distortion and feedback that went on for several minutes with all players on stage. Gradually, they began to leave, each person waving to the crowd before stepping behind the curtain. Eventually, only one of the bass players was left, and the volume and layers slowly fell away, fading into nothingness as the wheels on the projectors slowly ground to a halt.