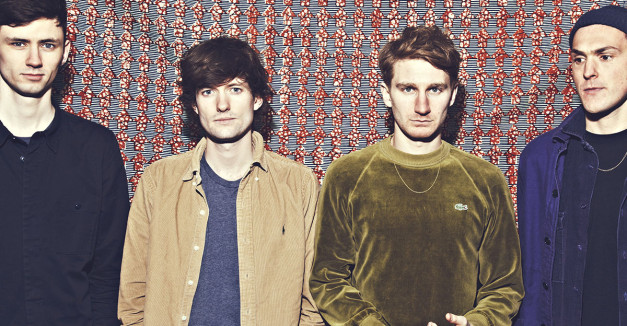 Somewhere above the doorway to Saturn, there’s a small, nuclear green creature peering out from behind a dark-violet leaf.

He’s not altogether an oddity, tucked in the kaleidoscopic undergrowth, among the jungle’s indigo-skinned Adam and Eve, and a flamingo wearing a chain necklace. But it’s here, in the primate’s beady, bulbous eye, that the Oxford, England, band Glass Animals have hidden yet another surprise.

Encased in the artwork for ZABA, the four-piece’s debut album from June, the little gremlin at glassanimals.eu holds a remix for “POOLS,” which in its original form oozes with auditory goo. While the secret track adds a bit of carbonation, the waters are mossy on ZABA, and the air is thick with reverb. A more terrestrial Alt-J, the Englishmen in Glass Animals fish up submarine instrumentals on which frontman Dave Bayley’s voice swirls like fog on a roiling river.

Tuesday night in Omaha, Glass Animals will settle their humidity in at the Slowdown with opener Rome Fortune. Tickets are $15 for the 8 p.m. concert.

In writing the first full-length, Bayley drew on an amalgamation of tales wandering off into a tropical wilderness. And it’s true, Bayley’s songs could very well see Brando and Bogart stumbling in, but they’d likely find their Apocalypse Now and African Queen selves surrounded by juxtaposed sounds, unnatural even in their foreign lands. These aural bits are the surprises woven into an 11-track masterpiece of the “occult bunny lagoon” kind, in the band’s words.

There are the bird noises and the hippos yawning, the walls being punched and the carrots being crushed. Even up against the reverberations of bitten apples and slapped drummers (Joe Seaward bearing the brunt of guitarist/keyboardist Drew MacFarlane’s hand), Bayley says there’s one field recording he prizes most.

“I have a pet rabbit at home that I let chew on my microphone,” he says. “It ate the foam right off. In retrospect, it cost me a lot.”

Since his childhood, Bayley has studied the habits of animals, even if he wasn’t actively recording them. Which explains something. The lanky, pale gentleman cites Otis Redding and Dr. Dre as influences, but it’s a third touchstone that needs the most context: Charles Darwin.

His father being a professor of chemical biology, Bayley often moved wherever the research led his family. One six-year stint found the Bayleys living near Texas A&M University, in a forest. Young Dave found solace in the variety of wildlife, which he enjoyed housing in terrariums.

“I was exposed to so much nature. America is nothing like England, where the most dangerous animal is a raccoon.”

Whereas the remainder of Glass Animals stuck around Oxford for most of their lives, Bayley is proud of his country-hopping upbringing. Especially when it comes to the middle of America and its diversity in landscape, from mountains to desert and fields to woodlands.

“I love the Midwest,” he says. “It’s always going to have a place in my heart.”

After the band signed with the label Wolf Tone and producer Paul Epworth — a middle-class man’s John Hammond with a resume that includes Adele and Bloc Party — they chose an ex-horse stable to record their album. The remote location led Bayley back to a wooded, Texan headspace, inheriting the curiosity of a child discovering a new world.

And while their touring is bringing Bayley back to the city and thus lending a more “urban direction” to the songs he’s been writing on the road, Glass Animals will be globbing the dense jungle of ZABA onto crowds in 15 nations over the next three months.

Among the different worlds folded into the album’s artwork, Bayley says there’s one spot of that jungle he prefers best.

“In the bottom corner, there’s some lemur, quite gold, and lounging. That’s where I’d like to be.”