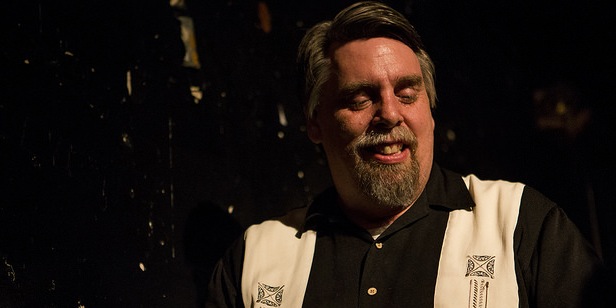 [Editor’s note: Welcome back to our musician-authored series Gear Nebraska. In this installment, Mike McCracken — guitarist for Lloyd McCarter & the Honky Tonk Revival, the Bottle Tops and many more — tells us about his 1949 National Double 8 neck console steel guitar, sold to him by a western Kentucky keyboard player.]

The Choice: There is no doubt about the choice. First of all, I love old musical instruments. They hold a strong story and incredible resonance to a much older time. I play a 1949 National Double 8 neck console steel guitar quite often with several bands around the Midwest. Since some of the old steels didn’t have legs, I had a “thrifty” idea of using antique ironing boards. Turns out, they are the best choice and beat the heck out of modern “imported” keyboard stands. One of the boards is wooden and was given to me by my mom. The other is a garage sale special with chrome legs. I named my steel Double Neck Betty and she loves both boards.

Why It’s Special: Betty and I have traveled to many states via vans and tour buses while living in Nashville. As a utility player, I usually bring a Fender Telecaster, a dobro, steel guitar and sometimes a mando to cover most bases. Betty has been from Virginia to California and all points in between. She is quite the conversation piece as many people have never seen a non-pedal steel and always comment about me using a technique to make it sound like a pedal steel. I use tonebar slants and pulling strings with my ring finger and pinky behind the tonebar to emulate a pedal steel. Even though Betty is over 65 years old, she performs flawlessly.

The History:  I was playing in western Kentucky area at several fishing resorts as well as clubs and private parties. The keyboard player, a Mr. Speedy Wyatt, and I became great friends. Speedy could play a mean Jerry Lee! One day we were shootin’ the breeze and I told him I wanted to try moving away from the pedal steel and learning more about non pedal traditional country. I said I was having a heck of a hard time finding a Double Eight neck steel. He said, “Heck, Mike, I just happen to have one under my bed!” He told me to swear never to reveal who owned the steel before him, as Speedy was never supposed to sell it. I am thinking the previous owner had passed and Speedy felt it was ok to sell, but he kept his bargain and never told me who owned it previously. I’m sure it was a famous person as Speedy knew many in the music industry.

About 4 years after I bought it from Speedy, he passed, and I will never know who owned it before. The previous owner added some nifty additions to the steel. They drilled little holes in the knobs and added cubic zirconium “diamonds” that are super easy to see even in dim stage light. They also added some rubies on the headstock as well as some western saddle adornments. I’m super lucky to play in some Honky Tonk bands where Betty can really shine. She has two tunings: E9 and C6. My setup is different from pedal steel players in that I have the C6 on the far neck as it’s easier to navigate while I have The tele around my neck. Betty has lots of magic in her and I am blessed she includes me in the process!