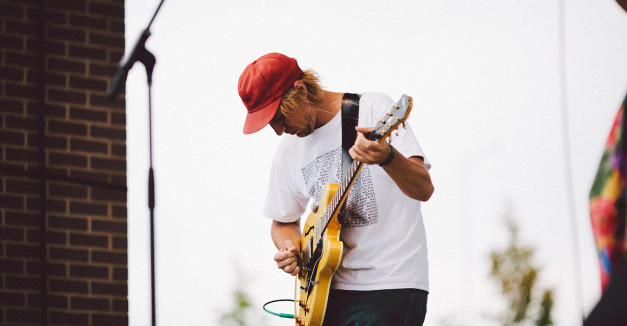 [Editor’s note: Welcome back to our musician-authored series Gear Nebraska. In this installment, Simon Joyner & the Ghosts/Healer guitarist Jim Schroeder gives us the skinny on the Electro-Harmonix Deluxe Memory Woman, the one delay effect affixed to his pedal board in a sea of rotating gear.]

Choosing only one piece of musical gear is a difficult task. I mean, is it like a desert island scenario? Does the island have grounded electrical outlets and a cute palm tree shaped amplifier with coconut tweeters? Do the tweeters have any followers?

Probably not, and that’s probably why I wouldn’t take my Electro-Harmonix Deluxe Memory Woman to that island. Don’t be confused by its exotic name! It would not provide the same companionship that a deluxe human woman could on such an isolated resort, what with a mind filled with real memory, producing her own electricity and conversation. She would certainly trump (2016) any gear or gadget as my first-mate. As far as first world civilization goes though, this guitar pedal is such a fine partner and middlewoman between so many other musical tools that it has to be my pick.

It started when I was first learning guitar and collecting musical gear. I kept seeing these effects in guitar magazines called “delay pedals.” I had no idea what they did, and it took some very careful imagining to figure out. Quickly, I came to the very strange and misguided conclusion that a delay pedal’s sole purpose was to confuse the audience as to why a guitar player’s fingers did not match up with the notes they were playing. This all added another level of sorcery to an otherwise semi-mystically dubbed Godsmack VHS. Was it that the camera was on the wrong guitar player during the solos? Was it just poor syncing of the audio in post production? Was Godsmack so progressive that they used delay pedals to play riffs ahead of time?

I don’t remember how, but I soon found out that delay pedals were used to echo and repeat your sound in any way you might imagine. Say you’d enjoy a set of portable canyon walls that say “hello, hello, hello. Or a gaggle of middle-schoolers that parrot your words in nasally chorus.  Maybe a miniature figurine of yourself that plays the same leetle notes on the same leetle guitar fractions of a second after you, all while perched on your teak nightstand.

Since that realization I’ve been sportfully obsessed, collecting delay pedals of all kinds for their own unique quirks. Usually it goes like this: I purchase a pedal and exploit some weird glitch, use it for a little while, and then shelve it until a performance or song calls for one of its functions. But I’ve had the Deluxe Memory Woman plugged in and turned on since I bought it 9 years ago from Music-Go-Round in Lincoln.

So yeah, it does all that regular delay and echo stuff. It also does these fun analog echo sounds, where a single note morphs into a swarm of diving cicadas, and by turning a thin-mint-sized knob the giant detached head of Chris Isaak is setting on the horizon bellowing a low warble: “IIIIII don’t wanna fall in love.” But what really makes it a necessary pedal for me is the drive knob. Just turn that knob up a bit to apply a hot iron over those wrinkled khakis. Crank it further to get the strangest static tones above a low fuzzy overdrive a la a melodic weed whacker. And don’t be scared — slip off those flip flops and twiddle that giant knob with your exposed big toe to produce any other absurd metaphor.

There might come a time when I’ll place this pedal back on the shelf. I’ll more than likely own a guitar amplifier with a desirable preamp section, and I won’t need any delay effects….wait, what am I saying? I can’t imagine that time ever coming. I’m going to cradle this baby to the grave!