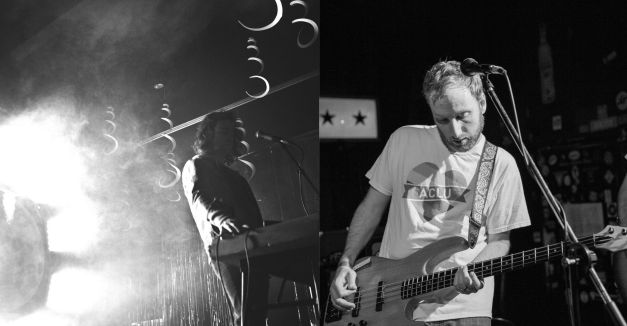 Editor’s Note: In this piece, we asked a pair of Nebraska musicians for their favorite piece of a gear. Here’s what Mike Flowers (Once A Pawn) and Jason Meyer (Talking Mountain, Feel Tight) sent back. Videos directly below if you need to catch up with their music.

“I have three basses, but this one is my favorite. I get asked all the time, “Dude what kind of bass is that?” It’s actually a kit.

It was built by Ricky Kaarstad, then given to his son Keith. Keith and I played in a band called Perfect Strangers. Keith was actually the drummer and I played his bass. When the band dissolved, I went off to play with Once A Pawn. Keith kept the bass and I got my own gear, but nothing ever sounded, felt or looked as good. I love the plain jane look. I love where the finish is worn off from years of use and the fact that there is no branding or other identifying markings on it. I love the bright sound of the single coil pickups and the slim fast neck. It’s so easy and fun to play. Best of all, no one else in town has one like it.

Finally, after years of pining for this thing I convinced him to sell it to me in August. I didn’t pay nearly enough for it on the condition that if I ever sold it I’d sell it back at the same price. I don’t think I could part with it again though. I’ve already lost it once and I know how that feels.”

I think everyone generally thinks of Talking Mountain as this electronic thing, which at the live shows, it totally was. It was presented on a bunch of electronics. All the songs and things that were played back on those boxes was still created by recording and playing real instruments. There wasn’t a lot of programming involved … my point is that I’ve been playing guitar and things since I was a kid and I have this collection of Fender guitars and they’re my favorite, and thanks for asking me to share a thing.