The Nebraska music community lost one of its most supportive members in Gary Flanagan on Jan. 26, 2013. Flanagan attended and documented hundreds of concerts in Omaha for years up until the very week of his death.

We've gathered a few thoughts and memories from Flanagan's friends and fellow concertgoers. Please leave your own remembrances by commenting below.

Matt Whipkey has organized a March 16 concert at The Waiting Room with Sarah Benck and The Robbers, The Whipkey Three, Brad Hoshaw and The Seven Deadlies and more including Matt Cox and Scott Severin. The show will start at 8 p.m. See more info here.

Gary Flanagan welcomed me to Omaha the first time I ever went there. I was living in Denver and doing photography work for RockOnColorado.com. Local Omaha performer, Sarah Benck, had performed in Denver, but I had missed her show. The buzz about town was that she had put on a jaw-dropping show. I looked up her music online and loved what I heard, making me wish I hadn’t missed that performance. I looked up some videos of her on YouTube and ended up corresponding with the person who had uploaded them. That person was Gary. He was obviously a devoted fan of Sarah and her band. He knew all of their history. After looking up the distance between Denver and Omaha and seeing that it was drivable in a day, I realized there was something I could do about having missed Sarah’s show. I could take a trip to Omaha to see her and her band play.

Gary met me at the venue where Sarah Benck and the Robbers were to play. It was a rib joint named McKenna’s, where, as a vegetarian, I enjoyed a fine meal of corn on the cob and fries. He acted as my unofficial Sarah Benck and the Robbers tour guide. When the band played a song I didn’t recognize from the online page, Gary was able to tell me that it was one Sarah had played with her previous band, Rex Granite. For another song, he told me, “She wrote this song when she was upset that someone broke into her car.” He was obviously very good friends with Sarah and her band.  And was he ever!  I learned that when they opened for Bon Jovi at the Quest Center, Gary bought an expensive ticket to the show, then watched Sarah's band play, and left without even bothering to see Bon Jovi. That's devotion! Gary told me if I liked this band, I would also like Matt Whipkey and Anonymous American and that Sarah had sung a duet on their album, Don’t Be Late. I picked up that album at Homer’s and enjoyed it on my drive home to Denver. 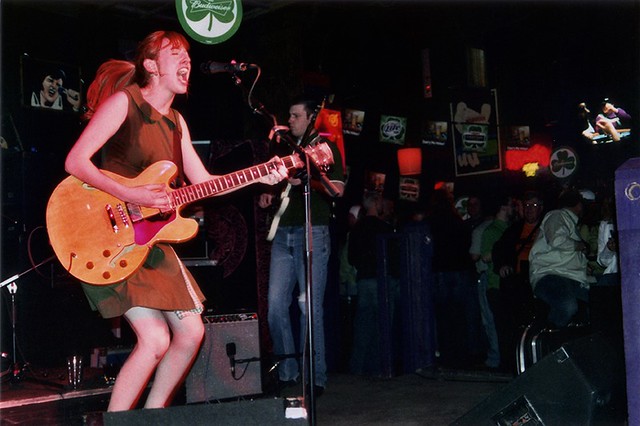 I ended up moving to Omaha the following year. I had visited several times to see Sarah’s band and other bands play. Omaha was the city where my grandparents had lived when they first immigrated to this country, my grandfather in 1903 and my grandmother in 1913. My grandfather had worked for a dairy company delivering milk. One of his customers was Father Flanagan of the venerable Boys Town. I told Gary this fact and thereafter jokingly called him Father Flanagan.

I found the City of Omaha to be teeming with musical talent. I saw Gary at numerous performances of Sarah’s band and many others. I was polishing my skill as a photographer. I believed every performer had a special essence. It was my goal to capture something of that in images. It was far more than just aiming and clicking. It was framing the performer in an interesting context and capturing exactly the right moment. After that, most of the work was ahead of me in post-production — converting the raw image to a Photoshop file (and later a jpeg) and removing noise and polishing it until it represented the artist well. Gary worked as a graphic artist. I e-mailed him often to ask his opinion of my work and if I should keep working on it or if it was ready to be released. I could always count on him for honest and helpful feedback. Gary created promotional flyers for musicians, sometimes using my photography work in them. I also gave him feedback to help him make the flyers as good as they could possibly be. We shared the same goal, to support the Omaha music scene. We both felt the same way — that Omaha was a city of amazing talent and that talent deserved to be appreciated. For me and for Gary, it went far beyond just getting a good photo or making a cool looking flyer. We cared about the people who put so much time and effort into creating original music for Omaha. For us that was what made Omaha a special place to live.

Alas, at the start of 2011 I had to move away from Omaha. On my last night out, I went to see two of the city’s talented women, Kelsey Nord and Jessica Errett, play. Gary was there for my send-off. Gary had been photographing musical artists with an old film SLR camera and with a clunky pink digicam, both which did not match his artistic abilities. I had recently upgraded from my Canon EOS 20D to a 1D Mark III. I gave him my 20D, knowing that he would use it well to serve Omaha’s musical artists. Gary shook my hand and thanked me for the camera and for the photography work I did in Omaha. I believed I would see him again when I came back to visit. It breaks my heart that that’s not possible. He and I continued to correspond on Facebook. I missed our collaborations in support of the local music scene. But most of all, I missed my friend.

I recently visited McCall, Idaho. When I was driving around that beautiful resort town, I came across a street sign that said, “Whipkey St.” I chuckled and thought of Omaha musician, Matt Whipkey. Of course, I had to take a photo of it. When I got back home, I posted it on Facebook and then wrote Gary about it in what would end up being my last correspondence with him. The thing is, if it had been up to Gary, there would probably be a Whipkey Street in Omaha. Gary loved his music. There would also be a Benck Street, Nord Avenue, Filter Kings Street, Jes Winter Boulevard, Brostad Street, Errett Way, Big Al Street, and many others. If I listed them all, this article would get way too long. Gary loved the people who created music for Omaha. And he was loved. People responded to his kindness and warmth.

I was born in Texas and have lived in six different states and two foreign countries. However, I’m a Nebraskan. The place where my grandparents immigrated to is the one that most feels like home. I will certainly visit, and I may move back, but home will never be the same again without Gary.

I used to joke that Gary saw more shows than I did, as he was always out, hitting several shows a week and a huge friend to and supporter of our fine local musicians. I used to often sit with him and Mark Sebring at shows. I regret I will never get to share a show with Gary again.

The last time I saw him was at the Hadden Sayers show, where he was taking pics with the camera he had inherited from his sister. He had a hard time with the passing of both his sister and his dad in recent years, but he loved taking his sister's camera to shows and on trips.

The Omaha music scene and Omaha's musicians have lost a dedicated, discerning and kind music enthusiast and friend… and I know I have lost a good friend, too.

We all are so shocked at your passing, Gary. I hope you can see and feel the outpouring of love for you and all the thoughts and prayers for your dear family.

My main memories of Gary are from sitting together at hundreds of local music shows over the past five years or so. We followed all the same bands so we were always running into each other. B.J. Hutchemann, another big fan of local music, often sat with us as well. We were big fans of Sarah Benck and I remember he and I and Tom Owen Meinen (another big Sarah Benck fan) going to her Robbers band's last show at the Zoo Bar and bringing her roses.

Gary made lots of show posters for various bands, and was real big into concert photography. If you check out his Facebook page, you'll see lots and lots of photos from local shows. He also made videos of various bands including Sarah and The Robbers, The Whipkey Three, Brad Hoshaw, Matt Cox and Midwest Dilemma. Some of his videos are posted on YouTube.

Gary was also a baseball fan and a big fan of Johnny Rivers. I think the last time I talked to him was at a show at Barley Street the night before Thanksgiving (I haven't been going to many shows lately), and I remember telling him I wouldn't mind going with him to see Johnny Rivers the next time he was in the area.

Basically, he was one of the very biggest supporters of Omaha music, and probably went to more than 100 shows a year. And the rest of us are really going to miss him. I'm having a hard time imagining what it's going to be like to go to shows and not see him there.

I knew Gary only through the music scene, and that usually means in kind of a "hey neighbor" sort of way. But he was such a kind person who seemed to always be at your shows, even when no one else was, that you got to know him beyond that.

We would chat about music, and he has even come to my house for home art shows. He had a sense of genuine admiration for music and the people that played it. So even if you didn't see him everyday, or even every weekend, it was always a pleasure when you did.

I'm not sure if he even knew this, but for me (and I'm sure many other musicians) just having him there was a welcome sign that the gig would be OK.