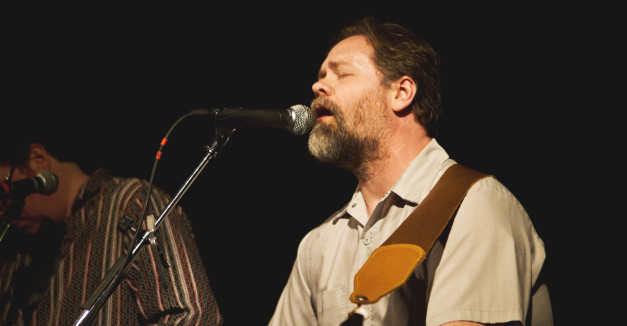 If Magma Melodier’s brand-new LP, Funeral Cafe, is a sweep of nostalgia, it’s almost certainly an album-long one.

The lead-off track “Bones & Love” (video below) rests easy on riffing and sliding electric guitars, building up a tasteful twang around singer/songwriter Jeff Iwanski’s voice. And it’s not a one-off experiment in genre. Those licks are the horizon-wide adornments of the entire Lincoln record.

And tasteful is the operative word. Iwanski certainly sings and writes like a Tom Petty devotee, but bandmates Chris Steffen, Mark Hansen and Tery Daly endow the Americana allegiance with peaks and valleys that dip and swoop only so far as they need to. Magma Melodier musicality.

On the one hand, Funeral Cafe bears noticeable resemblance to the recent self-titled release by Weldon Keys, propelled backward into itself by the nostalgia of both playing and repeatedly mentioning acoustic instruments. It’s thoroughly reflective and Midwestern. On the other, Magma Melodier’s Iwanski sings in a casual lilt, as though he were sharing old stories with the dawning day from a rocking chair. There’s no anxiety; he’s not rifling through old pictures.

The video for “Bones & Love” only issues the point further with visions of film reels and flickering memories.

Buy and preview the album here. It’s out on Tremulant Records now.