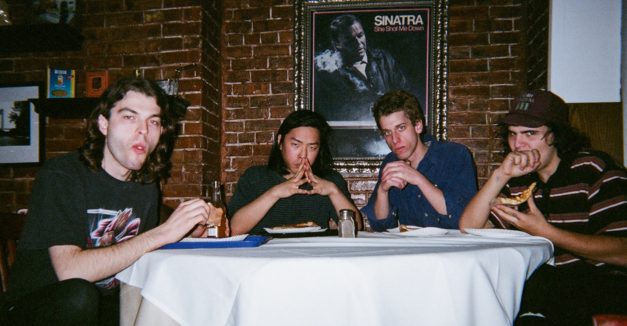 Editor’s note: the author of the following article manages social media and runs the door at Milk Run, the venue at which Navy Gangs performs Tuesday, July 19.

For Omaha-born Navy Gangs, cultivating warm, riff-heavy garage rock is only part of the game. With connections dating as far back as 2010, networking is what propels the product from the guitarist’s grandmother’s living room to the public ear via Stereogum.

The popular music blog featured “Special Glands” just last week. The track’s memorable riff is an autonomic force that remains quiet through the verses and chorus, charging up its power before it squeals in the instrumental portions and burbles out through the end. Though the lead guitar is the standout component of the track, the fuzzed rhythm guitar and the layered falsetto-over-drone vocals throughout complete a summery garage-rock staple in the EP.

Together, the members form an Omaha garage-indie supergroup of sorts, with members of Coaxed, Skeleton Man, Telepathy Problems and Sean Pratt & The Sweats, among others. Drummer Gavin Cordaro also has an experimental project called Hip Replacement with Omaha’s Brendan Reagan (Captain Crud).

Navy Gangs is constructed of vocalist and guitarist Matthew Tillwick, guitarist Noah Kohll, bassist Wilson Keithline — the only member who does not hail from Omaha — and drummer Cordaro.

The band began in Omaha in June 2015 and moved to Brooklyn later that summer, quickly recording in a self-built studio in Kohll’s grandmother’s living room and establishing connections with fellow musicians.

The band’s debut EP is finished and will be released in September on vinyl 7-inch and digital download. London-based label Super Fan 99 will release a cassette tape in England, and Navy Gangs will receive a limited number to sell in the United States.

Its Bandcamp page currently houses seven singles all released in the last year. Kohll would not say if any were recorded for the EP.

Considering the star of Navy Gangs’ single “Special Glands” is a shrill riff similar to the guitar work on Delicate Steve’s 2012 album Positive Force, it’s a good guess that Marion may be the perfect addition to the debut release to bring out those special components.

“We tell him kind of how we want to sound and then he’ll work his magic and make it come out sounding exactly like that,” Kohll says.

Kohll and Tillwick met Marion in 2010 while on tour at The Waiting Room. The pair found him a place to stay for the night, slipped him some Sun Settings recordings and they’ve been in contact with him ever since.

“When we moved out here, we hung out with him a couple of times and he wanted to help us out,” Kohll says. “We’ve been talking about getting him to play guitar live sometime, just like a live show in New York.”

Kohll says the singles on Bandcamp and the tracks off the EP were recorded on a four-track with an 8- or 16-channel mixer. He says they first recorded the drums and the “thrash” guitar, and then built the rest from there.

“It’s cool because the EP sounds like how we sound live, but it was recorded track-by-track,” Kohll says.

Navy Gangs has released seven singles over the past year on Bandcamp, though Kohll did not want to say whether any of the singles will make it to the EP. The band is already planning to begin work on a full-length album that should be out next spring.

Navy Gangs is feel-good, fuzzy rock n’ roll on the surface, but with lyrics that create an honest connection with the listener.

For instance, “1Alone” is a fuzzy ballad about being alone with your thoughts. Its somber tone and lo-fi percussion whisper more Elvis Depressedly than FIDLAR, coupled with lyrics like “I don’t know what I said, it’s all a mess.”

Even when the tone livens up, like on “Just Kidding Not,” the lyrics are still more honest than a typical garage act. “I feel so used. I’m a user ‘till it happens to me. I don’t need a lover, but I don’t ever want to be alone again,” is a young-adult cry over jangling, distorted guitars and a sped-up tempo.

Kohll says if the band stayed in Omaha, Navy Gangs would still be making the same music, but a residency in New York requires a harder “hustle” to get your name out there.

“You bypass a lot of bullshit just in terms of laziness or a more lackadaisical lifestyle,” Keithline says.

The move to New York has been beneficial for the band’s hard-working attitude and networking. However, they note that while he and Tillwick’s band Coaxed were able to play with post-punk band Protomartyr in Omaha two years ago, it’s much more difficult to secure such a spot in New York. Kohll’s cited “3,000 Facebook likes” as a benchmark for playing the shows he mentioned in New York.

“We’re still pretty unknown and in ‘brokeland’ here,” Kohll says. “In Omaha, we’d probably be playing a little better shows, but hopefully we get to the point soon where we can be playing those shows here.”