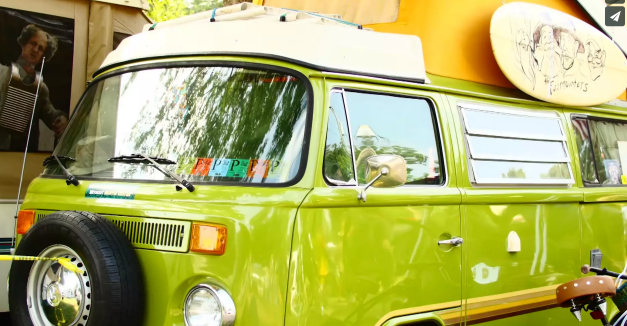 You may see this bumper sticker on a rusted VW Van in Lawrence or a pristine SUV in the suburbs of Kansas City. You might even see it at the end of a long driveway in the Flint Hills, or on a beat-up pickup truck in the cornfields of Salina. This or some other iteration of this statement expressed on the business end of your vehicle is an easy way to spot an old (or future) friend, someone you will likely see the third weekend of September amidst the Pecan trees that surround the Walnut River (affectionately called Pecan Grove by festival goers).

The Walnut Valley Festival, or simply “Winfield,” has been going on for 43 years. Nicknamed for the small southern Kansas town that hosts the event, the festival is home to a litany of contradictions that have come to define the Winfield experience. It is perhaps the only festival I have gone to where the culture clash between the attendees is so striking, it seems to threaten its very existence. You have booze-soaked rednecks in one corner, hula-twirling hippies in the other, and Brownback-loving baby boomers all the way on the other side of the festival grounds. In outright defiance of the red state/blue state dichotomy, Winfield has become synonymous with a type of friendship and brotherhood that ignores your place in society, where you can just shut up and enjoy the music, socio-political differences be damned.

Although commonly known as a bluegrass festival, a lively mix of folk, traditional music and even maybe a dash of rockabilly and punk makes this festival a singular experience. So if you find yourself with a spare week or two next September, grab your tent, grab your banjo and head on down to southeast Kansas. You will find yourself as one of the initiated soon enough, with at least a couple of good stories, a bunch of new friends and a brand new bumper sticker to take home with you.