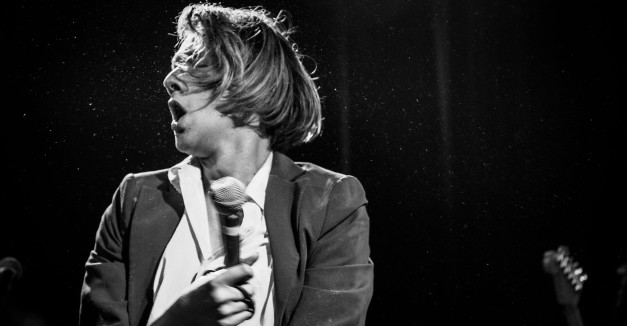 The stage was decked out like a teen girl’s bedroom, complete with a Leonardo DiCaprio magazine cover, candles, dolls and a pink record player. Flowers wrapped around the mic stands and strings of star-shaped lights draped from the amps.

Foxygen vocalist Sam France rushed into the crowd at the first song, sharing his juddering dance moves with the audience before returning to the stage for a choreographed display with the backup singers. He fell to the stage floor, his arms flailing in the air as the women ritually loomed over him.

Old-school rock and roll influenced the instrumentals, trading off between bumbling piano rock and heavy, screeching guitar riffs of arena-style anthems. The songs blended seamlessly from one powerhouse tune into the next in an operatic, Queen-style performance. 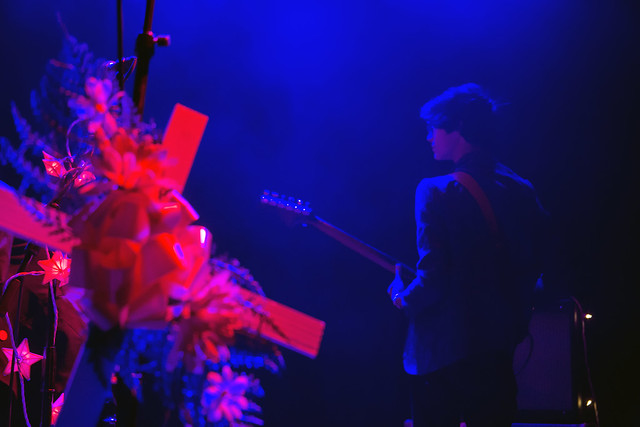 California’s Foxygen presented their farewell tour to The Waiting Room Thursday. The two-piece released their third album, …And Star Power, last year, drawing influences from ‘70s rock and roll. For its final tour, the band brought along a full nine-piece band.

France’s vocals were nearly inaudible as he shouted and growled through the singers’ gospel harmonies. He commanded the stage like a true classic rock star, jumping on speakers and sprawling his body around onstage maniacally.

The rest of the band played along with France’s antics. Following the end of “Hot Summer,” the band dashed offstage and returned only a minute later with new ‘70s-style costumes, all bell-bottoms and vintage, printed shirts. In their return, they launched into a playful cover of The Beatles’ “Let It Be,” staging a verbal fight after France purposely messed up the opening lyrics.

Foxygen’s unhinged, devised production carried through the encore. The duo’s recorded discography is much quieter, but the theatrical performance instilled a memorable farewell.

Australian pop musician Alex Cameron performed on the decorated stage before Foxygen. Without warning, the thundering bass of a drum machine boomed through the speakers and preset happy, delicate keyboard tones bopped over the percussion. Cameron sashayed onstage, his long hair slicked back as he boogied in a gray suit. 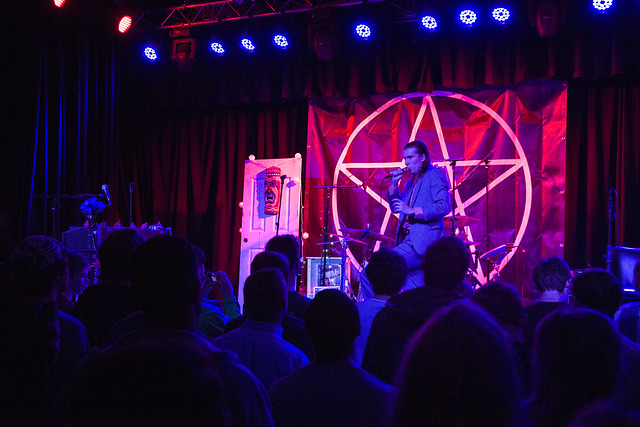 Cameron looked and danced like a parent chaperone in a John Hughes classic prom scene, swaying his hips to the karaoke-style instrumentals. His deep, Bowie-like voice crooned over ‘80s electronic pop with lyrics about tasting water and being a drunk mom at a bar.

Saxophonist Roy Malloy sat in a chair near Cameron’s newfound dance floor and only stood to play through periodic instrumentals. Though a majority of the set drew from Cameron’s silly dance moves — one of which he introduced as the “Sydney Strobe” — Malloy’s scattered sax solos rang through The Waiting Room, harmonizing with the bright synth tones.

Omaha indie rock act Oquoa opened the night. In the swaying beat of “Move Your Bodies,” vocalist Max Holmquist crooned through a fog of dense cymbals and shrill guitar melodies.

In “Yellow Flags,” Oquoa decorated a chilled, slowed down tempo with psychedelic guitar riffs as Holmquist wailed through the climax. Other songs often featured prominent, groovy basslines under an atmospheric partnership between airy keyboard melodies and echoing guitars. The horror-like synth of the closing song screeched in the long instrumental finale. 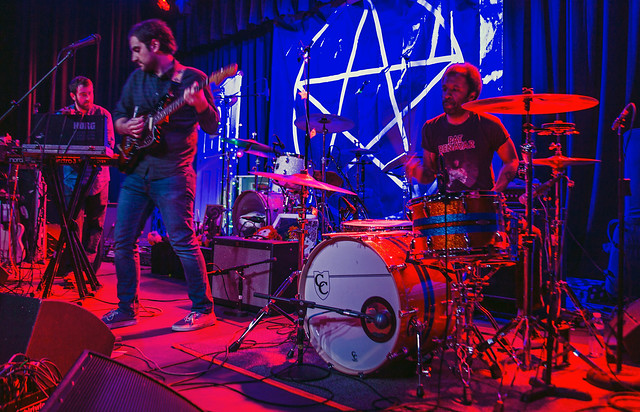 Oquoa complemented the touring bands, the set offering glimpses of the beginning of a dream-like state under blue and purple lights. Trance-rock echoed through The Waiting Room with calming reverb, the soundtrack to the opening of a subconscious’s imagination before the fantastical events of the dream would unfold. 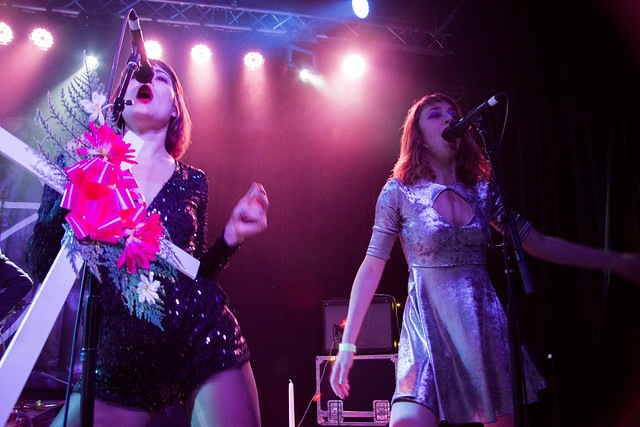 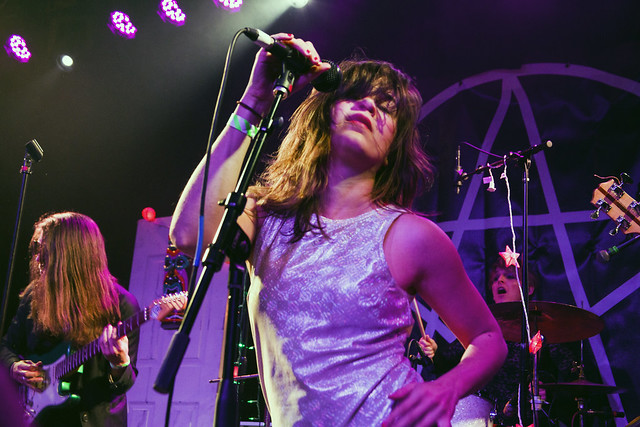 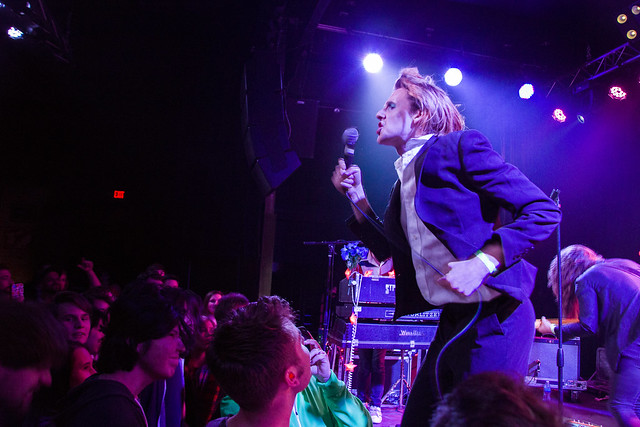 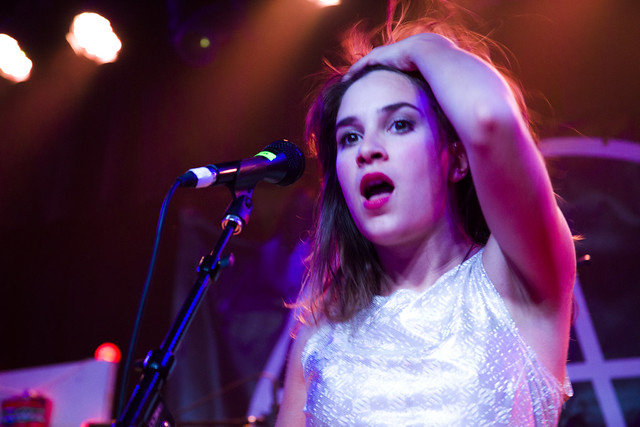 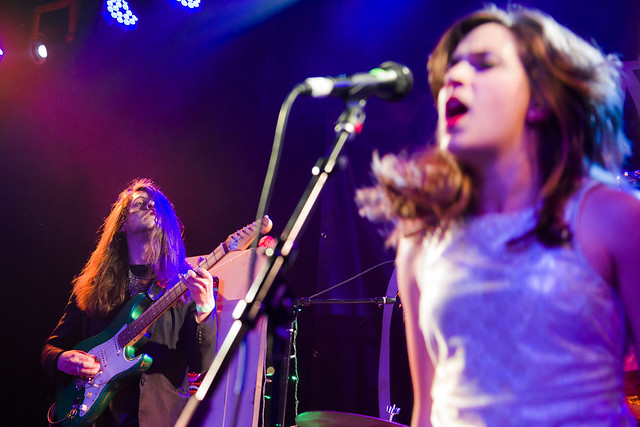 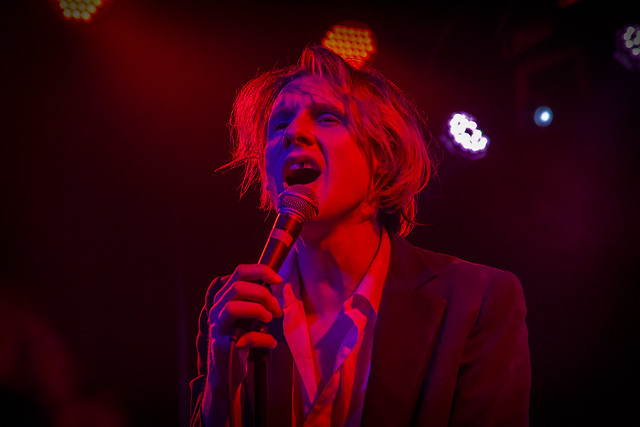 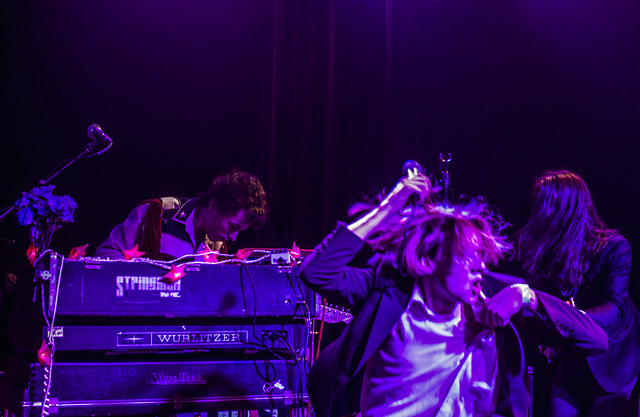 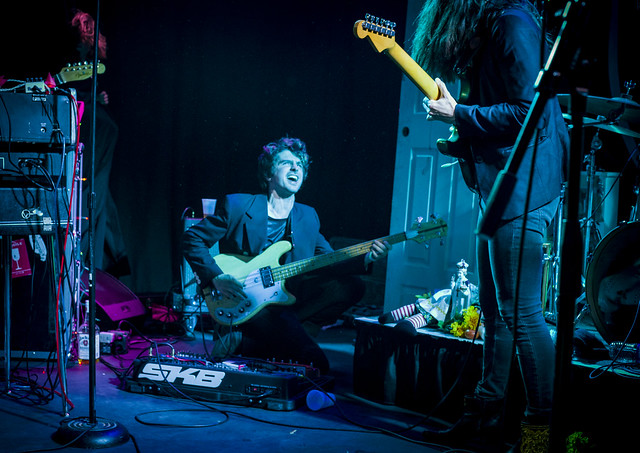 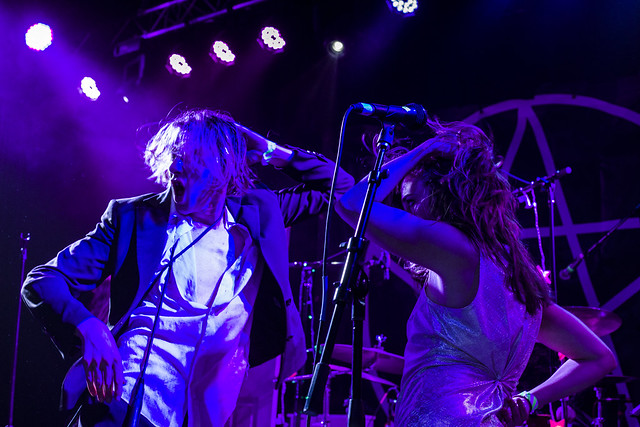 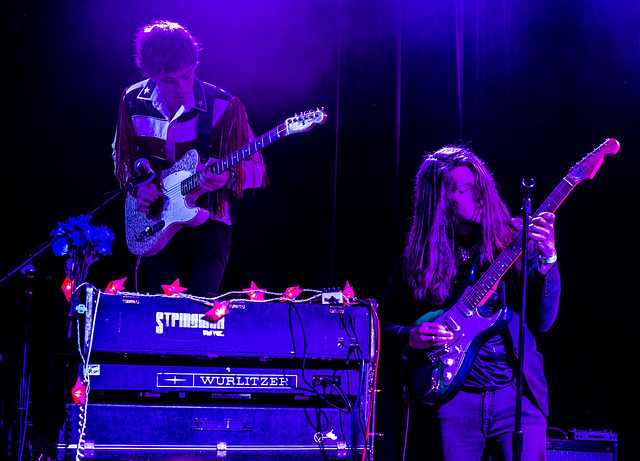 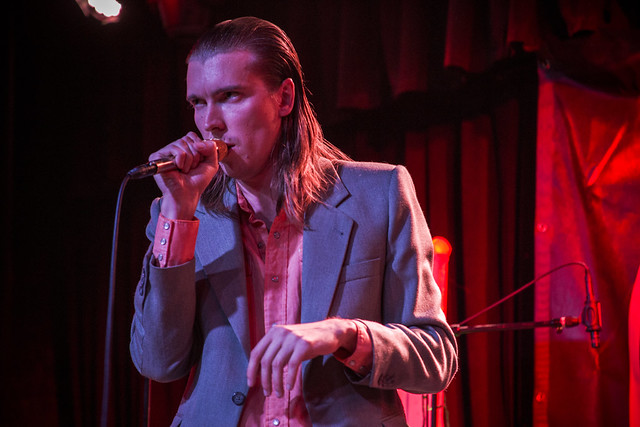 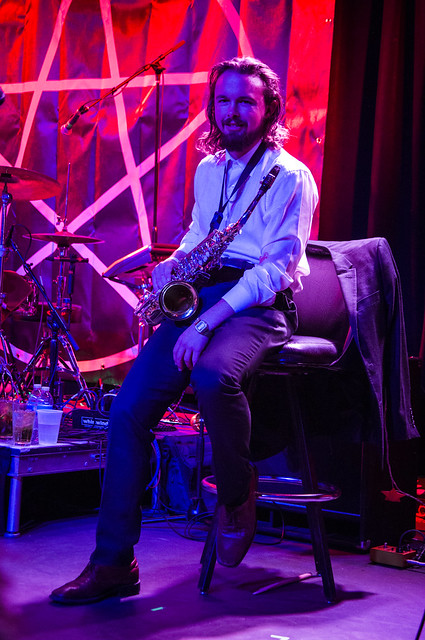 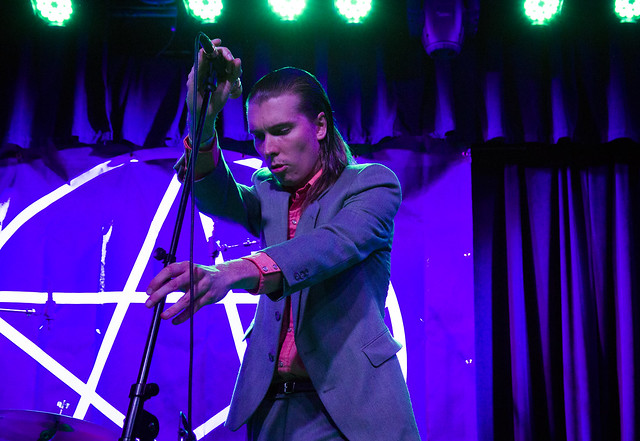 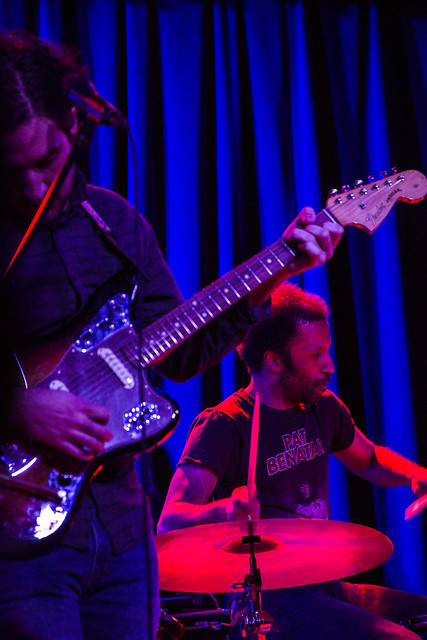 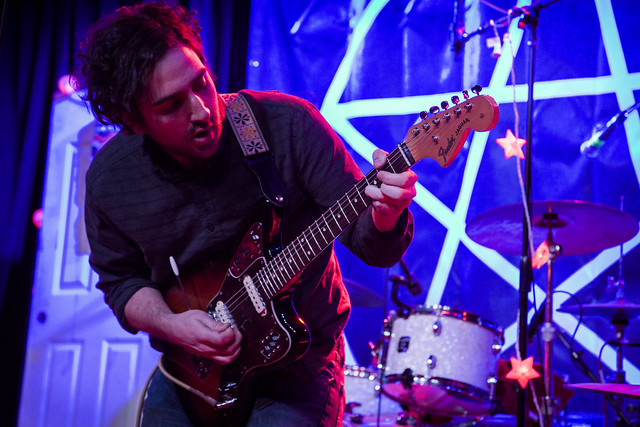 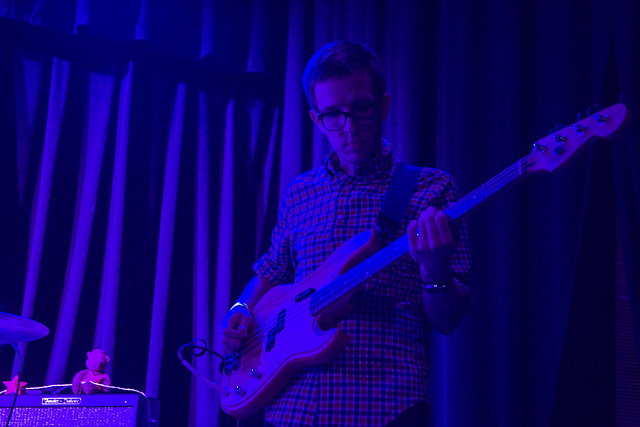