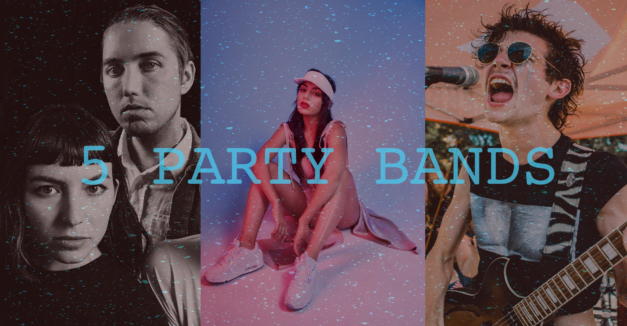 This is the first in a series of Lincoln Calling music festival previews that cover a variety of the acts you’ll see at the Sept 28-30 event. RSVP here and purchase tickets here.

There figures to be plenty of emotion at this year’s Lincoln Calling Music Festival. With so many acts around, you could figure out a way to laugh, cry, rage and hug it out all in the same evening — three evenings in a row.

But many of you will simply want to party, and we get that. While the options are many, we’ve put together a list of five acts guaranteed to get you dancing each night. It includes a couple of young locals, a band of “post-wave” Brooklyners, a Chicagoland psych-rock band and one festival headliner. Read on for a closer look at each.

What: The Chicago five-piece (sometimes six) stepped into the spotlight last year after people caught wind of one of its famous members, but its cool, psych-rocking attitude stands on its own. Once out to make a classic country EP, its founding trio of Matt Williams, Jake Hirshland and Dalton Allison fell “head over heels for each other,” adding Joe Keery, Javi Reyes and Wesley Toledo to the mix soon after.

Why: Post-Animal makes noted use of all its resources in its most recent release, Post Animal Perform the Most Curious Water Activities. Heavy on guitars, it’s the layering of keys and out-front bass lines that give it depth. There’s a dreamy fuzziness in the album’s lower-end that recalls the most guttural and rocking of Tame Impala raised from down in the dumps to high in the clouds. “Alabaster” is a four-minute acid rock fever dream, manic for its pacing but spacious enough to drift along with. The deliciously-titled “Swamp Fruit” burns with low-blaze psychedelic solos and that head swaying rhythm.

New track “Special Moment” is tighter and more compact, but still sits in Post-Animal’s lo-fi wheelhouse. And that they currently tour with another quintessential party band in White Reaper means they’ll be living up to that energy on a nightly basis, right into Duffy’s back yard.

What: The Brooklyn five-piece just released its debut LP This Is Post Wave at the end of August, on Dull Tools. It combines elements of disco, synth pop, dance punk and new wave into something indicative of the album’s title.

Why: This is definitely not Devo, nor is it your average Devo homage. But Future Punx doesn’t forget its forerunners as it aspires to bring the same dark-tinted, tightly-crafted dance punk into 2053. It also shares aesthetics with local synth punks Digital Leather. Chris Pickering smacks of Gerald Casale at his most excited, but sinks into Shawn Foree territory at his most distressingly post-apocalyptic. The title track sets the futuro-steampunk setting while songs like the video gamey “Endless Growth” and cautionary club banger “Manhattan Loverboy” flesh out a world that starts to feel like this one every minute. After the wreckage, the party isn’t quite the same. No, this ain’t no disco, and it ain’t no rave. This bizarre joy is Post Wave.

Who: I Forgot To Love My Father

What: The once-solo songwriting project of Lincoln musician JP Davis, I Forgot To Love My Father has since blossomed into a seven-piece pseudo-orchestra of swirling guitar effects, blasting trumpet, vibrant violin and Davis’ unrivaled stage presence. The band’s sole release, Live on HN FM, came May 2016 following that live appearance; it has also integrated new material into its live performance.

Why: I Forgot To Love My Father is like nothing else in the state at present. Since unveiling its new sound at that August 2015 live radio spot, the band’s local legend has continued to spread. Their dynamic, carefully-curated setlists trample from blues and rock to country send-up with a flamboyance and confidence rivaled by its frontman’s onstage persona. Davis dutifully draws from the vigor of Gerard Way and leads like a man possessed, except with a sense of humor. He’s trusting, too, as the band hits its well-practiced cues and various solo opportunities as he runs ablaze through or surfs high upon the crowd. It’s so enthralling, even to him, he doesn’t have to actually be playing anything; we’re already hooked.

What: The contemporary ska band formed in June 2015 as a six-piece, and with four of them from Kearney, they have found footing in Central Nebraska as well as Lincoln and Omaha. Its debut full-length album Things We Should Have Said (But We’ll Dance To Instead) dropped July 7 and was followed by its first out-of-state tour.

Why: Mad Dog is straight-up classic third-wave ska, checkers, horn-section and all. Vocalist Madeline Christensen channels Lincoln ska ancestors The Heat Machine’s Meg Mahannah and Genni Bachinski and, on a national level, the likes of American Pinup’s Lauren West. Like their audiences, Christensen is always moving, “skanking” her way across the stage. Just in case you forgot, Mad Dog helps you remember just how much fun ska can be. Embrace it.

What: Born Charlotte Emma Aitchison, the Cambridge-native pop star cut her teeth in the warehouse raves of London before signing to Asylum Records in 2010 and debuting on that major label with True Romance in 2013. The breakout came later that year, with lead vocalist and co-write credits on massive hits “I Love It” (Icona Pop) and “Fancy” (Iggy Azalea), plus one of her own, The Fault In Our Stars song “Boom Clap,” which found the worldwide top ten in 2014. She has a new mixtape, Number 1 Angel, out this year and a proper album on the horizon.

Why: Because she’s one of the biggest pop stars on the planet, sure, but for those who haven’t already bought in, consider how incredibly talented, smart and enterprising Charli XCX has been in the last half decade. The aforementioned accomplishments are impressive on their own, before adding how forward-thinking Sucker was; one writer went so far as to call it “pop-punk, radically redefined and dragged, middle fingers waving, into the future.”

True or not, she continues to root around the genre for all the bits and pieces she can smash together into hits, as well as how best to dazzle the “Angels” (her fans) in person. Her raunchy collaboration with rapper (and occasional stage partner) Cupcakke, “Lipgloss,” punctuates her latest release while pointing the way toward her grander, arena-ready direction. And as cheeky new single “Boys” indicates, Charli can make things intimate while . With such a wide pallette and so many colors with which to paint, her festival-capping performance is can’t-miss.