I wish you coulda been a fly on the wall
When I was 12 years old,
Crying over my homework,
I woulda slit my wrist if it wasn't for rock and roll.

The first time I heard Spencer Moody of the Murder City Devils roar those words, I immediately thought of my adolescent years in Norfolk, Neb. Moody’s lyrics are probably a bit more intense and dramatic than my experiences ever really were. As a teen, I found life in Norfolk boring, but never truly intolerable, and though I disliked homework, I always did it and got pretty good grades. But his message resonates with me still to this day: Without rock music, growing up would have totally sucked. 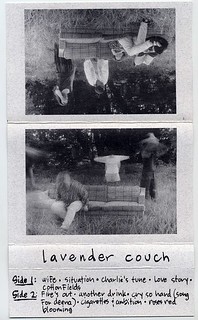 Fortunately, for those of us who grew up in northeast Nebraska in the 1990s, those of us to whom music mattered (even though we may not have been able to articulate why), we had Five for Fives. Five Bands for Five Bucks, or “Five for Fives” as they were known around the halls of my high school, took place about once a month on a Friday or Saturday night — in the early part of the decade, at Norfolk’s Knights of Columbus Hall or National Guard Armory and, later, at places like the Music Box Mansion and the Hub Capp Café. They were held in some of the other small towns in the area as well, in particular Wayne and Stanton. Their formula was pretty straightforward — five local bands for the whopping price of five dollars. Composed of classmates, recent high school graduates and dropouts and kids from some of the towns around Norfolk, the bands ranged in experience and skill from “newly formed and needs improvement” to “newly formed and promising” to “been around a while and still needs improvement” to “been around awhile and pretty awesome.” 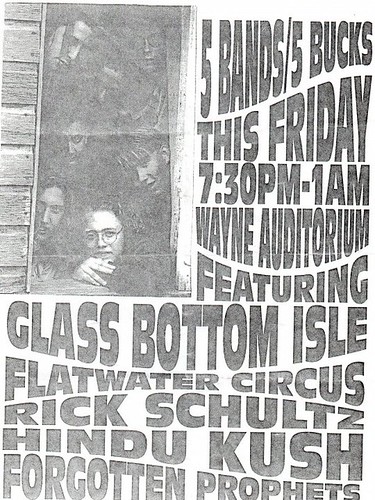 My friends and I would get so excited to see a new flyer — usually one of those DIY jobs modeled after some punk or alternative music zine — on a bulletin board announcing an upcoming show. The band names were great: Flatwater Circus (I took a few guitar lessons from their guitarist), The Whereabouts, Vicious Polyester, Rootamom Tree, Spelling Tuesday, Hindu Kush, Glass Bottom Isle (I remember them being somewhat of a local sensation as they had actually gone into a studio and cut an album). I was in love with their song “Audrey Rose” — I still have the cassette tape in a shoebox in my closet. 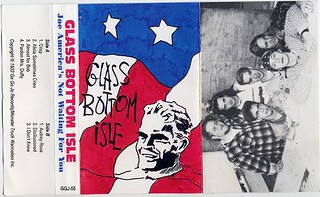 The best thing about Five for Fives: They provided a place for kids in northeast Nebraska who loved music to get together and, well, love music. We didn’t have a lot of opportunities like that around Norfolk, and going to see a live show often meant driving two hours to Omaha or Lincoln. Five for Fives filled a void. They provided a stage for those who wanted to perform, and a space for others who wanted to listen. I was thrilled to see my friends play the part of rock star on stage; for a lot of us, it was a dream role, and I loved watching other kids watch them. I loved hearing the songs they wrote and seeing the original artwork that they created for flyers, band posters and T-shirts. There was always a merch booth set up in the back of the hall where one could purchase cassette tapes of homemade recordings, one-inch buttons, and stickers, just like at “real” rock shows (at Five for Fives, however, merch stands were usually staffed by a band member’s mom). 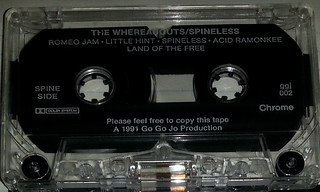 I admired my classmates’ courage to play in front of others, something that I wanted to try but was too terrified of looking stupid or sounding bad to ever attempt. In retrospect, I should have. Five for Fives were an incredibly supportive environment for those who wanted to explore music. They fostered and nurtured kids who wanted to be creative and play. And I think the pressure to gain the respect of peers pushed kids to try harder — to write better songs and to become more proficient with their instruments. In a weird way, they were like our small town, adolescent version of the legendary Anderson Fair, just more alternative and punk than country and western.

They were also a space where the thick walls of high school cliques could break down. I’d often find myself hanging out with kids I never talked to at school — not because I didn’t like them, but because our circles never overlapped. But at a Five for Five, you came to know who else was fluent in your unspoken language, and for a few hours on a weekend night, you all escaped together into the curious realm of music.

HOW OTHERS REMEMBER FIVE FOR FIVES

I am not sure how Five for Fives got started, but I remember the first "showcase" of local music in Northeast Nebraska was at Wayne State College. It featured three great bands from Lincoln: Trout Mystery, The Millions and 13 Nightmares. This would have been about 1989, and for me, it was the first time I had ever considered doing original music. It honestly never even occurred to me before that. I met Richard Schultz that night and we formed The Whereabouts, my first original band. The Whereabouts played some Five for Fives, too. 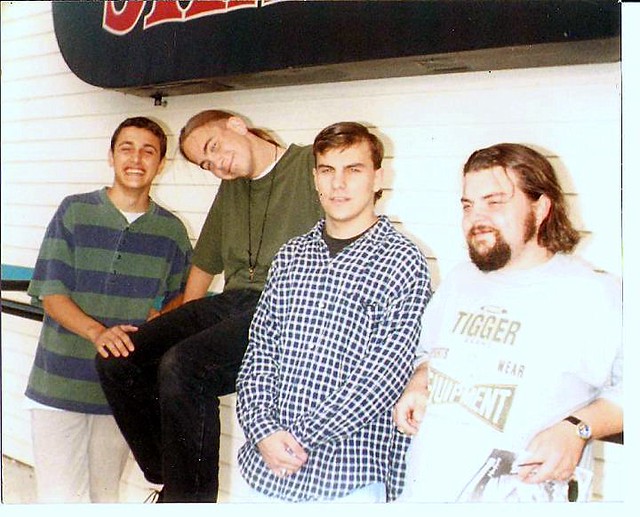 Flatwater Circus made its debut at a Five for Five in 1992. We played with Hindu Kush, Glass Bottom Isle, Bone Galley and Richard Schultz.

Flatwater Circus organized a lot of Five for Fives, and we frequently used Norfolk’s Knights of Columbus Hall as a venue because one of our band members' parents managed it. We really didn't look for other venues because it was an ideal spot. 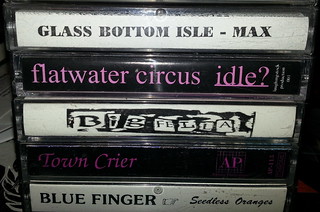 But we weren’t the only ones organizing these shows. The idea of Five for Five wasn't "owned" by anybody, and anyone who wanted to put one together could and did. I know that they took place at the National Guard Armory in Norfolk. And there were some in Stanton, too. I remember at least two that took place in a machine shed or a barn or something. Wait, it was actually the Stanton County Fairgrounds. There was also a couple at Riley's in Wayne.

The Five for Fives were so cool — for the bands and everybody. I think it was really special. I would doubt if there are many towns the size of Norfolk in rural America where something like this happened. We were all so lucky to be a part of it.

I played trumpet with Rootamom Tree for about six months. The rest of the guys were great musicians—for high schoolers, I guess. They wanted a trumpet player, and I think they just looked down the row of trumpeters in the high school band and stopped at me for some reason.

We played at the Knights of Columbus Hall, at a Five for Five in Wayne, and at one or two other places that I can't remember off the top of my head. One guy wrote a song about clouds once. It was totally weird, and the rest of the guys wouldn't let us play it. 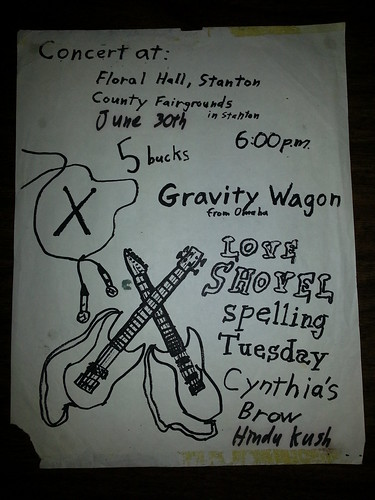 But we covered "Angel of Harlem" at every show, and that was always a crowd favorite. I think we covered a Sting song, too. I remember enjoying our original songs most of all, but heck, I was so new to the whole thing that I never really knew if any of our other songs were original or not.

My mom would drive me to our lead singer’s house to practice. The other guys in the band were juniors and seniors, but I was just an obnoxious sophomore with no idea what that world was like. It didn’t matter, we had a blast. I got recognized at the mall in Norfolk as the trumpet player from Rootomom Tree more than once. That was cool.

I wish I would have saved more stuff from that time — flyers, posters, photos. I guess I didn't know what I had until it was gone.

Our little band, Vicious Polyester, participated in Five for Fives around 1990-92. I played the drums and had a lot of fun. With a few exceptions, we played mainly at shows that were held in a barn/garage in Stanton. Looking back, that was odd because the acoustics were pretty terrible. But I guess it wasn’t really about the music alone; it was also about the attitude, the culture and the escape. 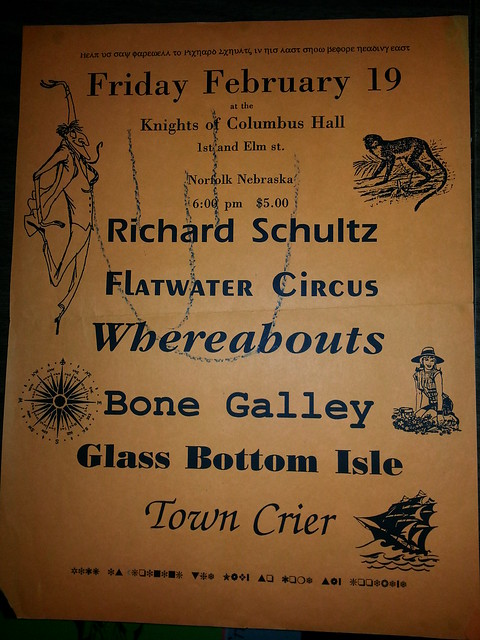 We sometimes shared the bill with bands from Lincoln and Omaha, and I felt like we were big-time playing with them. Some of the bands I remember include Leafy Green Things, The Acorns, Such Sweet Thunder (from Kearney), The Whereabouts and The Yard Apes. The Acorns ended up asking us to play a show with them in Omaha once. That was a dream to me then.