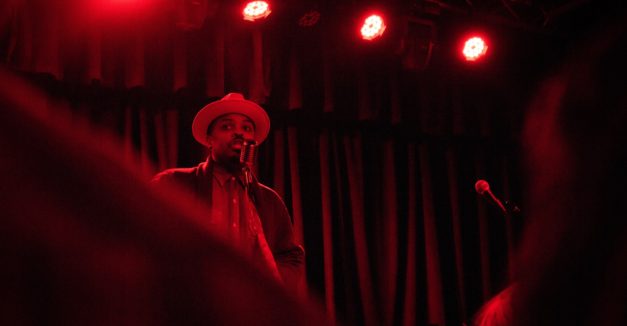 Birds sing and crickets chirp as Peedi Rothsteen takes the stage during Hear Nebraska’s sixth-annual Omaha benefit concert at The Waiting Room. Alongside the animal noises, a twinkling xylophone creates a light, enchanting energy reminiscent of a firefly-lit summer evening.

Rothsteen approaches the microphone with a smile, beginning his powerful performance of Bright Eyes’ “First Day Of My Life,” a song that the R&B vocalist describes as his approach to music — with fresh eyes. The artist transforms song’s shyness about the uncertainty of falling in love into an optimistic anthem of hope.

Rothsteen’s rendition is slow and deliberate, casually pulling every verse a little longer than the original, making the song lighter like the flavor of pulled taffy. He punctuates the final line with buoyant gusto, the nature sounds ending the song on a whimsical note.

Watch Rothsteen’s cover of “First Day Of My Life” below:

Thanks to Medical Solutions for supporting Take Cover Omaha.