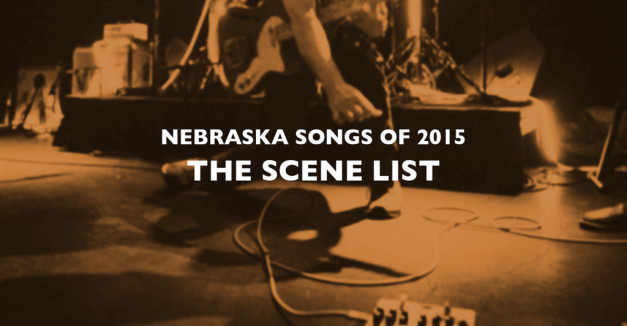 Nebraska music saw its fair share of memorable moments in 2015. To help assess the year in music, we asked more than a dozen musicians, journalists and scene figures for their favorite albums, songs, shows and events of the year. Check back each day over the next few weeks for more reflections and predictions.

Read on for some of the most well-loved Nebraska songs of 2015.

“A Million Miles To Vegas” by Rothsteen

I have been into Omaha R&B and soul this year, especially as singles. Rothsteen (who I manage) has this song “A Million Miles To Vegas” that is one of my favorite pop songs of the year local or national. I started working with him partly because of songs like this that can take an artist well beyond Omaha. Jus B and the song “Party Soul” was the song of late summer for me and Dominique Morgan created an original Christmas classic and it feels like he poured everything he had into “Miss You Most At Christmastime”.

“Seeing her cry in the living room for the third time in as many nights” by Naturally the Foundation Will Bear Your Expenses.

Ben Curttright’s voice is raw as he reaches for the right words to comfort his sister, the subject of the song’s title. Add in the soft, melodic acoustic guitar and it’s ready to file under “songs to cry to forever,” courtesy of Nebraska’s most purely emo band.

Hands down. Clever. Comedic. And a great use of tuba.

“What of Me” by Domestica; “Elijah” by Kill County

Let me preface these by saying, when I listen to a truly amazing song, it hits me really fucking hard.  I can feel the hairs standing up on my arms and usually a trancelike state ensues.  I can remember exactly where I was when I heard my favorite songs; drinking coffee, riding my bike, or staring at computer screen.  Being a recording engineer/producer myself, I find myself picking songs apart when I listen to them and analyzing them in my head.  It’s a weird OCD problem I have.  Every time I listen to one of these songs (or the albums above) I can feel the left brain fade away and I am lulled into a weird trance.

I got a Domestica record from Jon after Giant’s Arrow played with them at O’Leaver’s.  I dumped it on my phone and went for a bike ride on the Rock Island Trail.  As I was listening to this song, I could feel myself pedaling harder along with the music.  Pawl Tisdale’s furious drumming makes me feel almost panicked, like I’m going to have a heart attack.  I love it.  Heide’s vocal in the chorus is incredibly catchy, especially with Jon’s counter floating underneath it.  This is just a damn good song.  Big props to Chris at Studio PH and mixing engineer Eric Medley for capturing that energy and somehow squeezing it into my headphones.

Everything about “Elijah” is beautiful.  I love the ominous floating feedback that lingers for the entirety of the song.  I love the pick noise of Ringo’s metal picks on steel strings as he plays that mesmerizing a pattern on the banjo.  I love how the pulsing tremolo of the electric guitar slowly builds then drops off, leaving you to meditate on Ringo’s vocal.  It has a This Will Destroy You-esque droning bridge section.  A beautiful marriage of folk music and post-rock.

The O’Leavers set starts off with muddle conversation in the background but by the time Schlesinger reaches “Coolie Trade” you could hear a pin drop throughout the bar, leaving just a man and an acoustic guitar.

Tara and I are in the same boat having not released new music in a while, so hearing her shiny new songs makes me super happy. I love everything about the production and her just creepy enough lyrics.: “I fly away, leaving a trail of my insides.”

“Shark” by Noah’s Ark Was A Spaceship; “White Elephant” by Miniature Horse

Noah’s Ark Was A Spaceship released Shark at Live at O’Leaver’s and when I listen to it, I feel like putting on magic black glasses and a leather coat and driving a fast 80’s European car in slow motion through dimly littunnels.

Rachel Tomlinson Dick is a fucking genius and her song White Elephant from her Miniature Horse project is the pinnacle of her greatness. I’ve listened to it probably 300 times this year.

“Holy Shit” by The Good Life.

I like this one because it can make you laugh (like, what are those laser blaster sounds?), pump your fist and sing along (on the line “Holy Shit, that we even exist” for me), and confront the existential dilemma.

Something that Matt Whipkey shreds on. No doubt about it.

Even though it’s not really the lo-fi vibe they normally put out, it’s by far one of my favorite songs that came out this year. Super catchy and I related to it.

“Shut Me Out” by Twinsmith

It has an infectious stuttering start and a catchy guitar riff connecting the versus.  Combine that with Jordan’s great vocals that glide in and out of falsetto effortlessly, and you’ve got an earworm that won’t get out of my head.

I don’t know what it’s called but Mesonjixx debuted a new song when I saw them in October and I absolutely loved it.

[Editor’s note: this song isn’t it, but you’re likely to get the idea.]

Fave Nebraska song would have to be Honey Bee by Tara Vaughn because well she’s Tara Vaughn and it’s sweet ,soulful and exactly what I needed this year.

“Tiger” by All Young Girls Are Machine guns

That song is SEXAY.

Is Big Harp a Nebraska band or a national band? I don’t know. I’m including them here because the song “Golden Age” off their 2015 album Waveless is just fantastic. It makes me feel like I’m 16 again, cruising down the highway, blaring this on my factory cd player with the windows down and heading nowhere in particular. Except now I’m 33 and listening on an iPhone during my bus ride to work. Whoa, THAT snuck up on me!