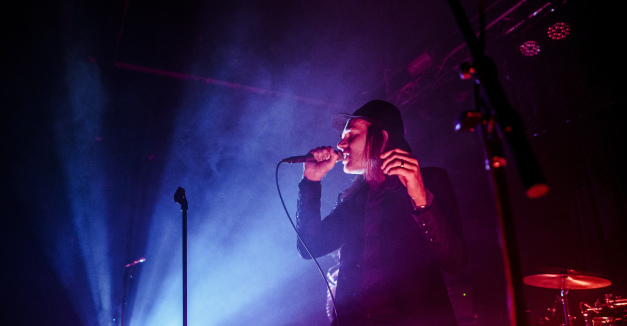 To encapsulate 2014 as best we could, we asked nearly two dozen Nebraska musicians, journalists and scene figures about their favorite albums, songs, shows and events of the year. Catch up on the other categories and keep an eye out throughout this week for more reflections and predictions from this crew.

Read on for some of the most well-loved Nebraska songs released in the last year. There are a handful of repeat-favorites, but the sheer distance in style between them is a testament to the creative energy we cultivated in 2014. Here’s to a new year as fruitful as the last.

I know the album isn’t out yet, and I’m assuming this is what the song’s title is, but if you’ve been to a live show, maaaaaaaaan. It just feeds that righteous, riotous anger in me. Hell, all of MPDG’s songs do. I’m gonna need y’all to get those recordings out, STAT.

“Damage Control” by The Faint

It’s an epic song that reminds me a bit of My Bloody Valentine and Primal Scream and just has a fresh sound to it that is pretty upbeat and happy for them musically. I saw all three shows here in Omaha this past summer and this song was the highlight of everyone of them. After the first show, I just waited for it to come around in the set for the next two shows.

With the caveat that I find it moderately insulting to bands to pick single songs out of their composed creative output, albums (and to be fair, I’m also not a fan of modern single-song culture), I’d have to say that Conor’s “Artifact 1” was just amazing and effecting to me from the 1st time I’d heard it. Blake Mills wrote and played one of the saddest guitar lines I’ve heard in a long time. Gets me literally every time.

Anything that’s by Halfwit

Don’t really know the names of the songs but every time I hear Halfwit play I end up in the mosh pit acting a fool.  Raw dancible riffs for days.  Hopefully we will see an album in 2015.

The sheer heart-wrenching lyrics matched with the soulful twang of Hoshaw’s voice give this song a wonderful indie/folk/country vibe.  Also, subject matter, i.e. a painful end to a relationship, is one that most people can relate to.  The idea of getting that person’s name who (you’re still heartbroken/lovesick over) tattooed on your heel is a very strong metaphor and lends itself to some great imagery.  The symbolism of pain in a heartache and pain getting a tattoo is a great analogy and what better way to say you hate someone than by literally walking on their name with every step you take?

The first time I heard this song was at Benson’s Fourth Friday music showcase. Packed into a small room, everyone sat on the floor encircling the beautiful harmonies sung by Lars & Mal. This song sparked my love for their music with its honest lyrics and its quiet yet powerful build up of vocals and drum beat in the background.

If I must pick one song from the whole year… It has to be “Throwing Pennies” by Jack Hotel. I can’t tell you how much I love this song. It makes me cry. Really, the whole album, Good Sons and Daughters is songwriting gold, but there’s something about the arrangement of “Throwing Pennies” that keeps me in goose bumps.

Razors’ new tape surpasses all others, which seemed near impossible. Track three, “East Coast Girl,” may be one of the best Razors song written. Listen to the rest of the tape. Buy it on Unread or at Almost Music!

“Loss of Head” by The Faint

It’s so inspiring to me that The Faint keep getting better with age, and the new Doom Abuse record is their best record to date, in my opinion.  Everything the band has put into each album and what has influenced them to sound like they do, is all combined in this one song. “Loss of Head” is like this “in your face” dark, druggy goth montage soundtrack to a midwest dirt road beer party … it’s kind of depressing but still really fun. This is my dance punk anthem of the year.

“Illusion” by Josh Hoyer & the Shadowboxers

This song is a heart beating hot blood through Josh Hoyer’s popping veins, and it’s a soul, an essence hoping to stir the working man and get him to dance. Tied to a warm memory of this year’s Lincoln Exposed, where HN Managing Editor Chance Solem-Pfeifer and I traded the chorus back and forth throughout the week, it’s got a symbiotically related hook, where the vocals could not live without the horns, responding flawlessly to the call. Cheers to Hoyer and his ultra-talented cast of Shadowboxers for producing two great albums in one year.

“Lion in Disguise” by Halfwit or “Go 2 Work” by Buckhunter

Most of the Nebraska music I gravitate toward is intricate and intimate, but this year I latched onto some driving beats. The layered ferocity of Buckhunter’s “Go 2 Work” powered an ill-fated half-marathon and countless housecleaning sessions.  And while all of HALFWIT’s self-titled release is the kind of garage punk I crave, I keep going back to “Lion in Disguise,” for my fix.

The perfect summer anthem, capped off with an equally evocative video.  The use of samples paired with Conchance’s effortless flow made this one stick out. The way these three work so perfectly together to elevate their sound into something uniquely their own is really something special.

Oquoa (colloquially known as Quinoa) is one of my favorite live acts. I like when Max Holmquist eagerly swirls his hips during lulls in the songs. I like how Patrick Newbery slams on his keyboards more intensely with every drink consumed. I like how every time I listen to Oquoa, I feel like I’m on a really relaxing, unexpected vacation to some cool place where everyone has the exact same beard and flannel shirt.

The song “Nest,” absent from their studio album but recorded at Live at O’Leaver’s, may be the archetypal Oquoa vacation song. Starting with a simmering riff and lyrics that probe the listener — “Do you sleep at night? Are your friends around?” — the song eventually opens up, allowing for a reassuring drum beat to kick in, almost as an answer to Max’s questions. It culminates in a sort of cleanse, as Max repeats, “It’s all okay.” The keys drop in, carrying the song to its end with a swell of exhilaration, relief and resolution.

Having only the studio version of this song from April release We Are The Rattlesnake would be plenty. It has the feel of an epic, even at just less than four minutes, because of how dynamic its two parts are. What starts with vocalist Tim Carr and his guitar, first alone, then floating along on a wave of sunny synthy keystrokes, gives way to thundering chaos, as though disappearing through a wormhole. A few lineup changes later, the live version at Lincoln Calling in October emphasized the rock elements of the song while Jordan Ellis’ violin, a new addition, darted around it adding accents. Getting essentially two versions of this song in one year was an mind-melting indulgence and, for the latter version, a sign of things to come.

“A Man Who Believes His Own Lies” by Josh Hoyer and the Shadowboxers.

I was at their rehearsal when Josh first presented the song to the band and knew right away it was gonna turn into something special. The verses with the Foxy Boxers backup vocals always puts a smile on my face.

This song paints a very detailed picture of the main character, and the whole thing really reminds me of John Prine’s “Hello in There” with regard to its guitar picking style and overall feel. The violin and dobro solos really help to convey the sad tone of the lyrics, and this is a song that I would love to hear being played alongside “Hello in There” and any Bob Dylan song on the radio.

I like this song quite a bit. Eyeball has done a couple of shows with the guys and they’re always great.