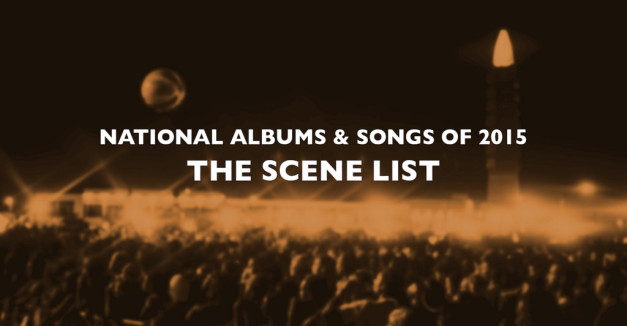 To help assess the year in music, we asked more than a dozen musicians, journalists and scene figures for their favorite albums, songs, shows and events of the year. Check back each day over the next few weeks for more reflections and predictions.

Read on for the eclectic scene take on national albums and songs of the year, featuring choices from pop radio to buzzy indie bands to hip-hop and R&B. (And for reference: albums first, songs second)

Painted Shut by Hop Along

It has a fresh urgency to it, Frances Quinlan’s vocals are as unique as anything out there. It ended up in my car stereo and is still there, and I try to listen to a couple hundred new albums a year. So for it to take up that valuable space for so long must mean something.

“Want To Want Me” by Jason Derulo

I guess I am into the national pop/soul singles this year also.

Sun Coming Down by Ought

Montreal’s Ought (I realize that’s not exactly “national”) released Sun Coming Down this year when I was still recovering from 2014’s More Than Any Other Day. Ought delivered another anxious dose of friendly post-punk that’s often chaotic, yet backed by vocalist Tom Darcy’s weird sputterings about “fancy seeing you here!” on “Beautiful Blue Sky.”

She is the frontrunner of experimental R&B, incorporating spurts of harsh noise between her signature spattering percussion. The song showcases her breathy falsetto, but she also takes the opportunity to manipulate her voice into scratchy, villainous vocals in the bridge.

I’ll be honest, I don’t know a lick of Spanish aside from what a kid would have learned on Sesame Street in the early eighties. Doesn’t matter. Carla Morrison has an emotive whisper of a voice and a singer-songwriter style that I’ve always associated with  indie musicians. I’ve had to go to websites with translations of her songs. I’ve had to plug some of her lyrics directly into Google Translate. In spite of being in the dark on her content a lot of the time, Carla Morrison’s music over the years has just found a home in my heart. The new album isn’t an entire departure, she does what she does well. The touch of synth, choosing piano over guitar, the playfulness with sound–these things bring her storytelling to another level. Think drama.

I want both a leather jacket and for this song to be engraved on my headstone after I die. I’m so jealous I never wrote it.

Payola by Desaparecidos; Forgive Yourself by Publicist UK

Every song on Payola could hold is own as a single and the production of the record is flawless. From Denver Dalley’s pitched, stuttery, octave leads to the furious slap-echo and distortion on Conor Oberst’s already aggressive vocals, adds a sense of urgency to this album. This album has so much energy and sonic texture for a punk/rock album. I listened to this album pretty much everyday for most of the summer.

Eric Nyfeller (Doe Eyed Design) turned me onto Publicist UK (I think he toured with them as a second guitar for a while). The band is a super group of members from Melt Banana, Goes Cube, and Revocation but it doesn’t sound anything like any of those bands. I’m not even sure how to describe this band and I’m bad at genres. It’d be like if the guys in Joy Division bought distortion pedals and decided to make a “heavy” record. Not a metal/hard rock kind of heavy, but “slow heavy” or “intense heavy” sound, if that makes sense. Zachary Lipez’s baritone vocals are really intense and haunting throughout the album, emphasized by double tracking the vocals causing this warbly chorusing effect. Especially on “Levitate the Pentagon,” where one by one the instruments drop off during the bridge leaving you with Lipez’s intense spoken word lyric before it launches you back into the incredibly catchy chorus. Great album, thanks Eric.

Loma Prieta albums have an incredible sound to them. On this song (well all of them actually) everything from drums to the vocals have a nice saturation on them. The guitars go from brutal to jangly and pretty. It’s hard not to bob your head along with this song.

I really want to say Get Well Soon by Walter and if I had any more guts I would because the solos on that record are nothing short of ripping. I have to go with new record The Things We Do To Find People Who Feel Like Us by Philly rockers, Beach Slang. Easily one of the longest album names in the game but worth every syllable.

Indie, Punk, Rock, call it whatever you want…this song rules.

Shana Cleveland’s guitar leads are as flawless as her voice is haunting. Add some doo-wop harmonies and sharp songwriting and let it roll over you like a big wave. Their show at O’Leaver’s in September with Will Sprott and Sucettes was one of my favorites.

“A New Wave” by Sleater-Kinney

Largely because of the Bob’s Burgers animation of it, but also it’s a good song and I managed to sneak it onto almost every day’s playlist for Omaha Girls Rock this summer.

It’s a bit of a weird collection of stem-winders, with a few yuks and tons TONS of amazing musicianship.

I like cake better than candy, and I like “Sweet Tooth” better than “Candy,” but I still love candy.

Sometimes I Sit and Think, and Sometimes I Just Sit by Courtney Barnett

Courtney Barnett’s Sometimes I Sit and Think, and Sometimes I Just Sit is definitely my top pick for 2015. Courtney’s rambling, stream-of-consciousness lyrics make for some of the best rock and roll storytelling I’ve heard in years.

Allen Stone’s “Freezer Burn” is a short barn-burner of a soul song that features Stone’s amazing falsetto vocals over with soulful pounding stabs of guitar, organ, and piano. The structure of the song is also unique: the song ends with what would usually be a bridge and leaves you wanting more.

This band is awesome. classically trained on a bunch of instruments, real good pop sensibilities. And as a bonus, his Twitter account is really good.

“Want to Want Me” by Jason Derulo

Top 40 radio totally crushed it this year. So many good singles.

It’s like a better Deafheaven. Sure yeah we get it, Sunbather was dope. Whatever. Moonlover is like cooler older brother that gives you beer. Thank you Ghost Bath.

“I’ve Been Bored” by Superheaven

This tracks speaks on how bands are too busy focusing on fitting into a certain image, that they become a bland and boring copy-cat band. “Mirror image for the worse. Another one out of the herd.” It’s definitely a needed thing to be stated.

To Pimp A Butterfly by Kendrick Lamar (Honorable mentions: Black Messiah by D’Angelo and the Vanguard; The Epic by Kamasi Washington; Sound & Color by Alabama Shakes)

“Really Love” by D’Angelo and the Vanguard

This record is a controversial and experimental leap for an already popular group, and I feel that Marcus is searching the depths of his soul. They took a risk from their previous work and showed us a vulnerable side and… I’m sold.

It is so natural, raw, and incomparable. I haven’t heard a song in a while that can so easily speak for itself, while directly exposing the main theme of our existence. It is far different from a lot of the work that was put out this year and brings me back to the music that I grew up on.

I feel always feel kind of honored to listen to anything by Bjork. Vulnicura is pretty brutal, complex, and one of her best in my opinion. It’s so easy to get lost in it.

Really hard to say. I really dug “Moaning Lisa Smile” by Wolf Alice. I’m a sucker for shit like that, you know…when the wall of guitar hits. But I jammed Tame Impala’s “The Less I Know The Better” just as much.

The band is from Denmark but had a US release with their latest. The sound is fresh and innovative even. They have a pop appeal and sound progressive at the same time.

If you want the definition of what soul songwriting genius sounds like in 2015 it here. Track to track you will go through a journey vocally,lyrically and sonically. She just got 3 well deserved Grammy nominations and I will be writing a stern letter of she doesn’t walk away with at least one. I’m serious. I’m known for my stern letters.

So JoJo (yes Leave,Get Out JoJo) dropped this Thringle a few months ago. Not exactly a EP but not a single she laid many of us to rest with these songs. The one that blew my mind to the Phantom Zone was ‘Say Love”. This song about never hearubg I love you back…hearing everything else and how that can pish you to your breaking poitnt. There is a point at the end where it’s all vocals and the track stops and you just feel it in your chest. Yeah, get into it if you haven’t already.

Because I like to listen to atmospheric music when I write.

“Let it Happen” by Tame Impala

My brain and my butt say Missy Elliott’s WTF (Where They From), but I gotta go with my heart, that shameless bastard: It’s “Hello” by Adele. I fought it until I had a moment of clarity while guffawing over that SNL Thanksgiving skit.