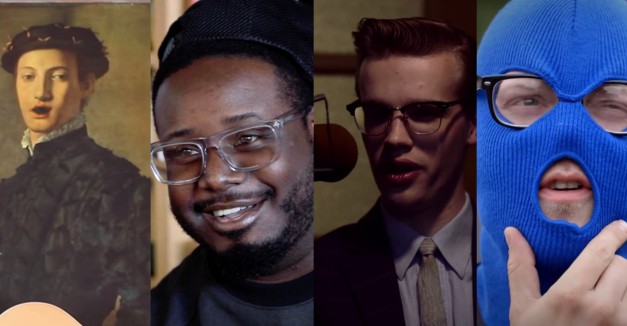 Our appreciation of 2014 continues as our list of scene contributors shares its favorite music videos of the year. We didn’t specify whether choices should be local or national, so we received a nice mix of both.

To check in with the other pieces of 2014’s “The Scene List,” head here. We’ll continue with choices on Nebraska songs, albums and shows through the first week of 2015. Thanks to all the participants, and feel free to share your own favorites in the comments.

Mean Street’s video game. Not really a video but…. this thing is fucking amazing.

“Half About Being A Woman” by Caroline Smith

You know, I wanted to say “NITE OWL” by M34N STR33T or “Please” by HERS, both are beautiful videos for awesome songs, but Caroline just slipped right in there at the end of the year with this video where she’s very visually struggling with herself to walk away from a relationship that is OVER. It is devastating and strong and perfect.

That video just looked great, fit the song, and was fun to watch. I would pull out my laptop and make people watch that video. It’s pretty rare that I do that with local videos.

Everyone clowns on T-Pain. This legitimized him.

“Are You?” by Soil & the Sun on Audiotree

This video shows a joyful trek through rivers and climbing rocks, with instruments strapped to their backs under the beaming sun. The voices and instrumentals of The Soil & the Sun mix in a powerful and meaningful way. Their lyrics hold deep thoughts about life, the universe, and what is beyond the eye’s ability to see.

“Warmduscher” by The Salamander

“Queen” would have to be my favorite video of 2014 because this video happened to put me in Rolling Stone for my first time ever!  After replying to a casting call in Kansas City from Ssion’s, Cody Critcheloe, and not knowing what video this shoot was even for (because being in a video directed by Cody is amazing enough), I found myself in a swank Kansas City law firm on the 22nd floor eating fake jumbo shrimp with grey hair, wearing a fancy suit and watching a boy in heels parade around a bunch of old men for eight hours. I honestly had no idea how big of a video this was going to be.

“Hunger of the Pine” by alt-J

There’s something brutally quaint about arrows. As a fragile counterpart to the more injurious weapons of destruction, arrows symbolize more of an inner pain, whether self-inflicted or not. “Hunger of the Pine” uncannily capitalizes on the metaphor, trailing a hard-as-nails protagonist who welcomes the torment.

“Never Catch Me” by Flying Lotus

If the music video for Flying Lotus’s “Never Catch Me” ft. Kendrick Lamar doesn’t make you feel things then you are not a real person. Hiro Murai, you get me.

This video nails it.  Omaha streets and diners, drinking beers, getting weird.  It’s summer in one track, and somehow they were able to capture that visually.

“You Already Know” by Arcade Fire

I’m sure there are many truly breathtaking, well-planned, creative music videos made this year. This is not one of those, but it is my favorite. For their other music videos from Reflektor, Arcade Fire has employed the help of Anton Corbijn and Roman Coppola, not to mention featuring a wealth of well-known stars. But for “You Already Know,” Win Butler takes a DSLR with a fancy lens and points it at the other band members who are only sort of playing their instruments. Instead of Win singing, the paintings on the walls have their own microphones. The footage is overexposed. The effects are horrendous. At the end, we see Win waving to himself in a shaky mirror, and we feel absolutely no emotion whatsoever. But through it all, our girl Regine Chassagne is looking fly as hell, and that’s what matters.