words and photos by Jake Greve

Sweat pooled upon faces, bodies began to move in a space where people barely had room to think.

At the Sweatshop Gallery, the London-based band Fat White Family brought out the primitive instincts in the crowd, many of whom had never heard the band before the beginning of their first American tour that started Monday night in Omaha. Properly named for this event, the Sweatshop Gallery glowed from the red lightbulbs hanging from the ceiling, but only for a moment.

Almost instantly, during Fat Whites’ first song, the audience collectively decided it wouldn’t risk forgetting this night after their blacked out Saint Patrick’s Day. The lighting in the room transformed from a glowing red to bright white with the flashes of light coming from the crowd’s smart phones. From there, any concert ritual of standing in one place and bobbing one’s head to the beat of the song was abandoned for instinctive dancing and shoving. 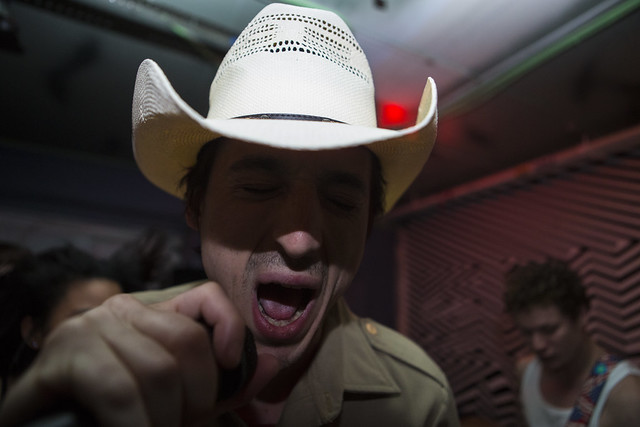 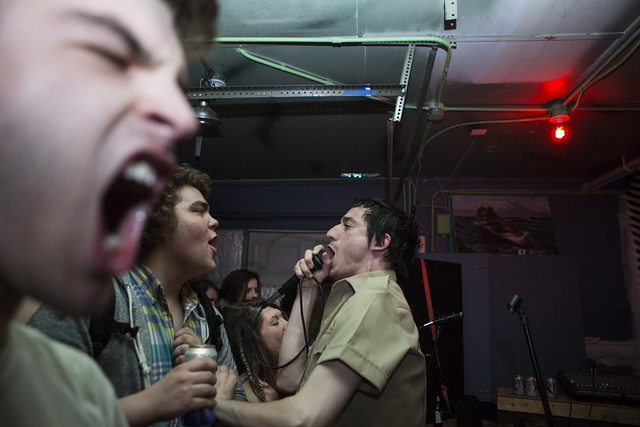 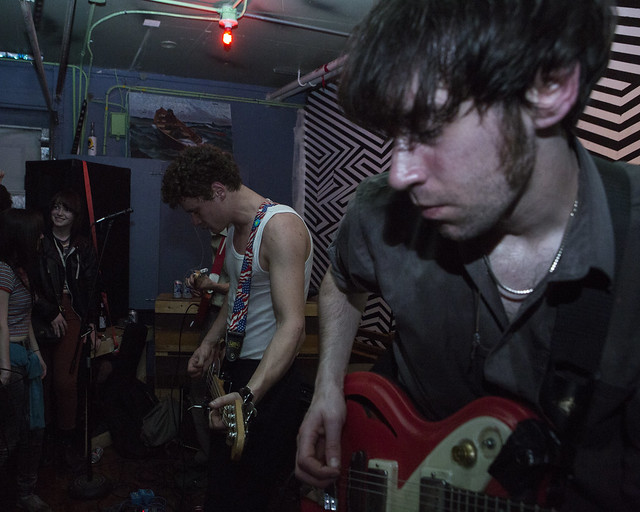 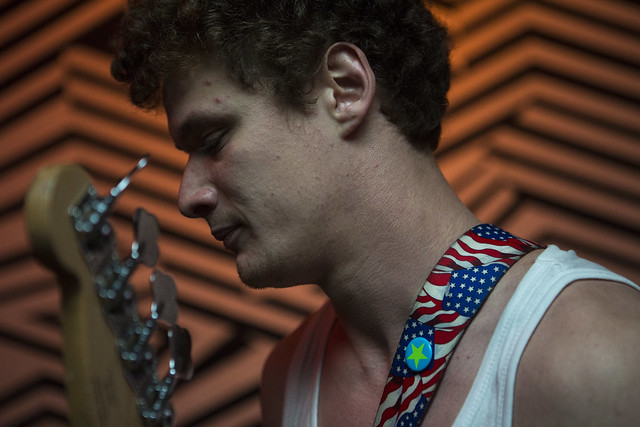 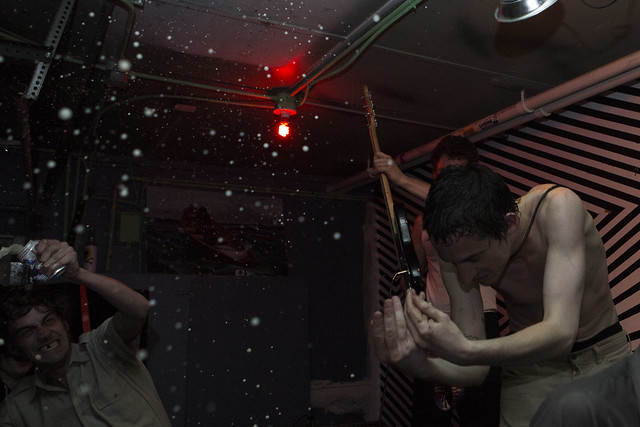 The recent winners of the NME award for Best New Artist (read about the fallout from that victory here) began their set with such a high level of energy that once the crowd decided to go with it, there was no going back. Frontman Lias Saoudi took control with his unrelenting stage presence, taking his shirt off after the first song, exposing his sweat-drenched body. Saoudi spent the remainder of the show hyping up the crowd from within their midst. The other members Saul Adamczewski (vocals, guitar), Adam J Harmer (guitar), Nathan Saoudi (organ), Joseph Pancucci (bass) and Dan Lyons (drums) stayed back behind Saoudi while he was in the crowd, but were only tame relative to their singer. The entire band interacted with the crowd by dancing and playing their instruments from the ground. Pancucci sprayed beers onto the crowd as the show ended, with Saoudi standing on top of an amp. 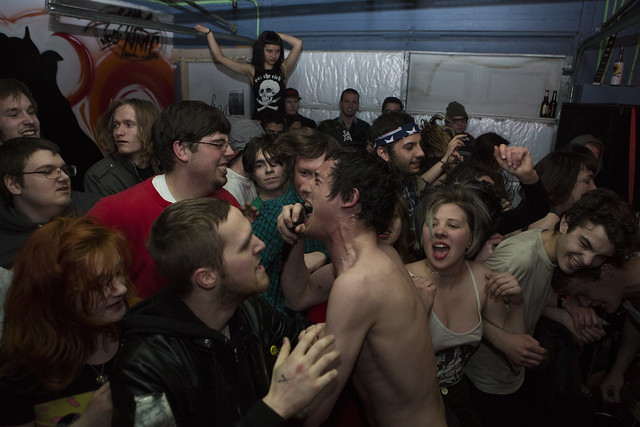 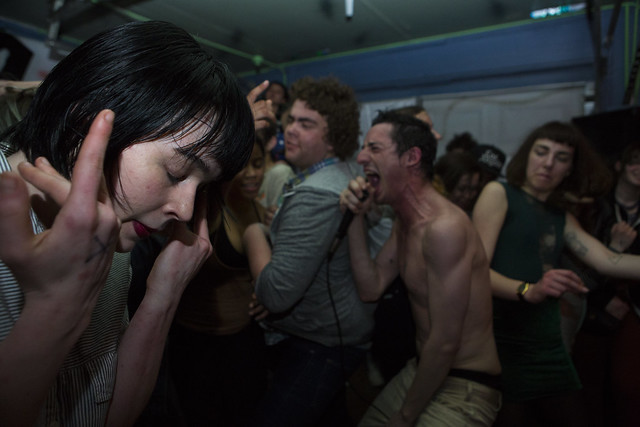 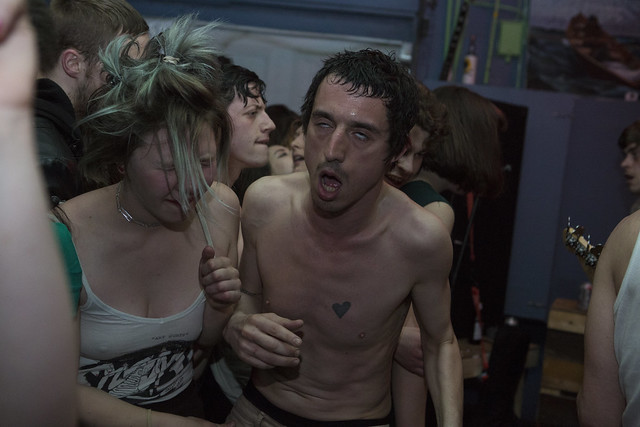 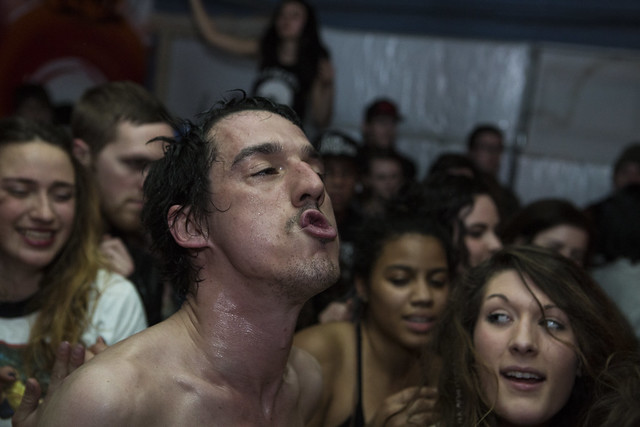 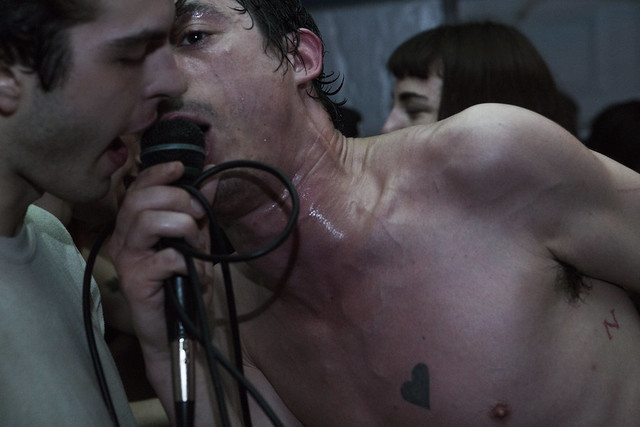 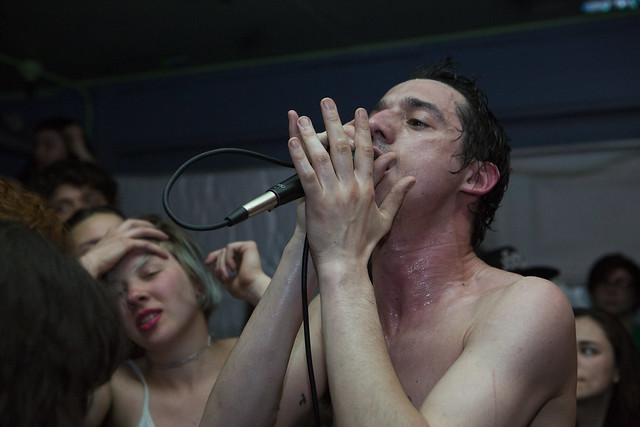 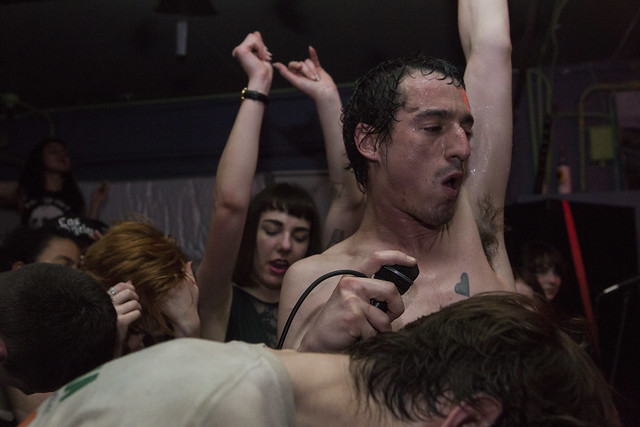 Sam Martin, frontman for Omaha's Capgun Coup, started off the night with a solo set of his "spook folk" material. Martin’s set, much different from the others, was a toned down group of songs he performed only with his voice and electric guitar. Containing songs from his forthcoming solo album A Notion In The Ocean, the performance was tender and haunting at the same time. The dark room, lit only by red lightbulbs, housed a calm, but responsive, crowd. 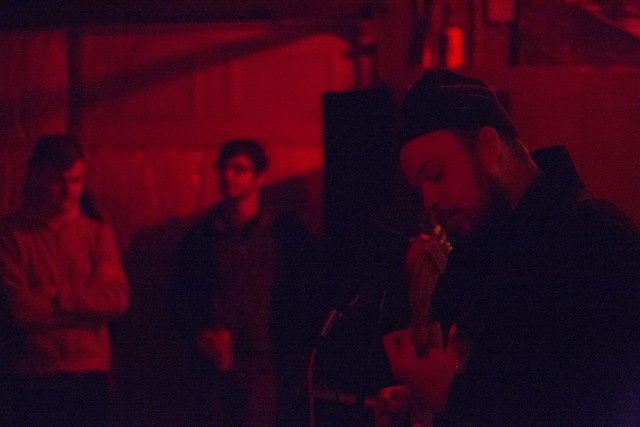 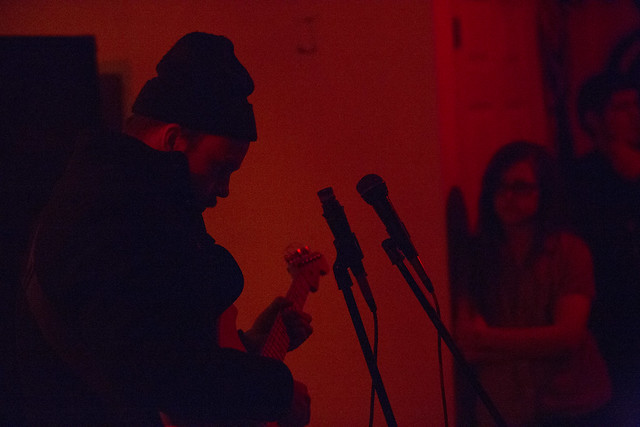 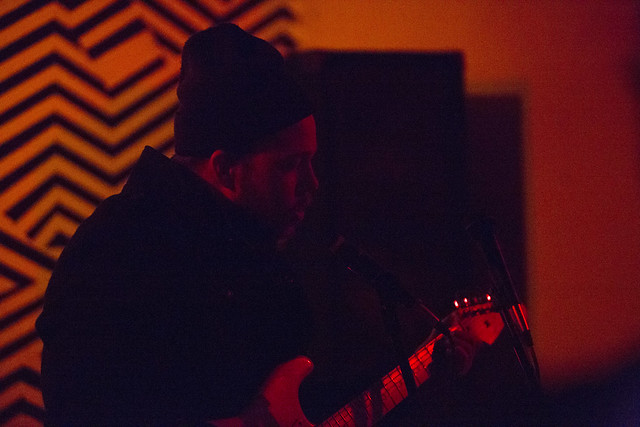 Skeleton Man is a supergroup of Omaha musicians from the bands Coaxed, Yuppies and Eric in Outerspace. The psychedelic garage rock, with its heavy fuzz and atmosphere, warmed the crowd up for the long night of intensity ahead of them. 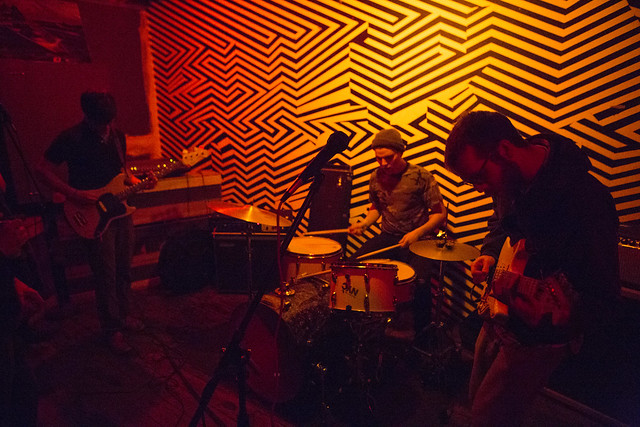 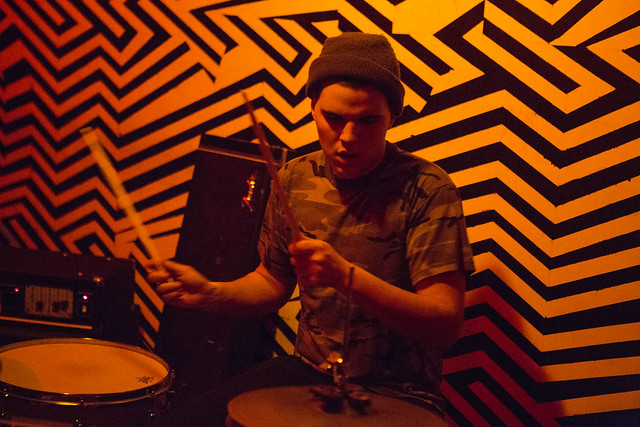 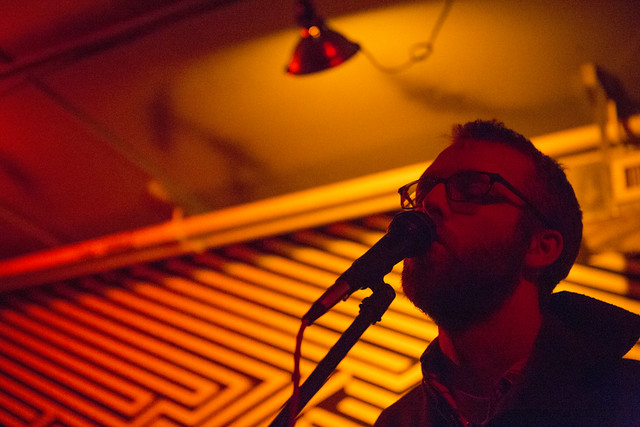 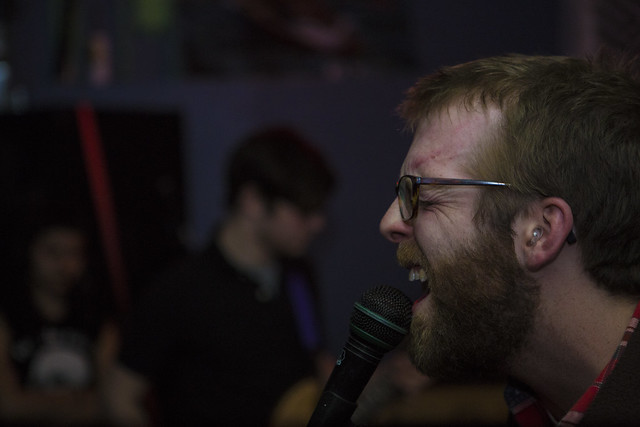 When he sings, Telepathy Problems’ frontman Ryan McKeever moves between spoken word and shouting out his post-punk fueled lyrics. When the yelling ensues, veins bulge from McKeever’s forehead, adding to the intensity of the expression. Their music, consisting of garage, post-punk and some occasional ‘90s pop influences, stimulated the crowd moving about the garage-sized venue. Trading in ample noise and feedback, drummer Gavin Cordaro, second guitarist Blue Peterson and bassist Camille Stout all demonstrated the sloppy, dissonant, eerie and satirical nature of the band. 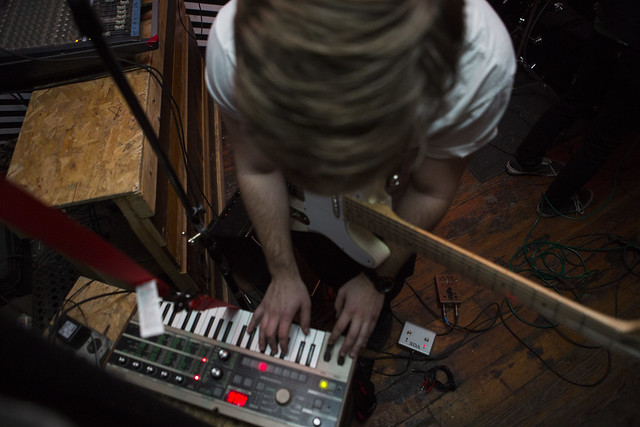 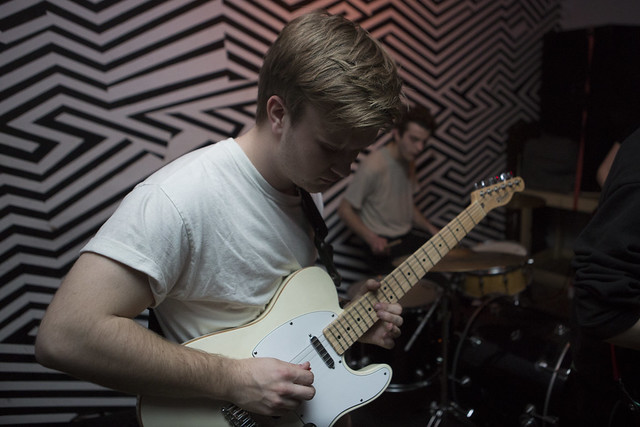 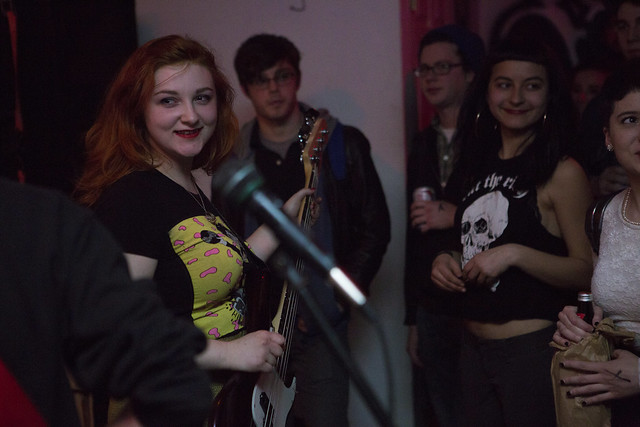 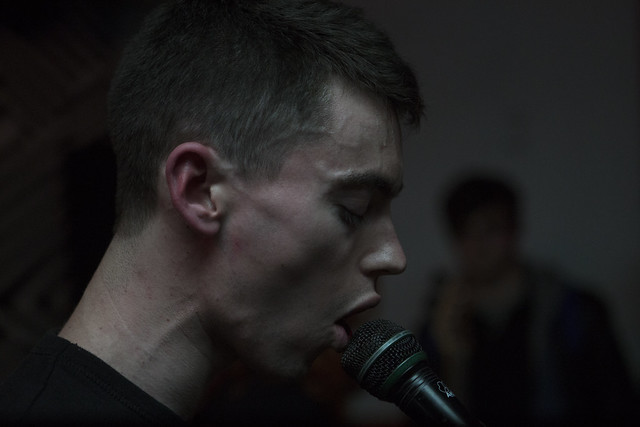 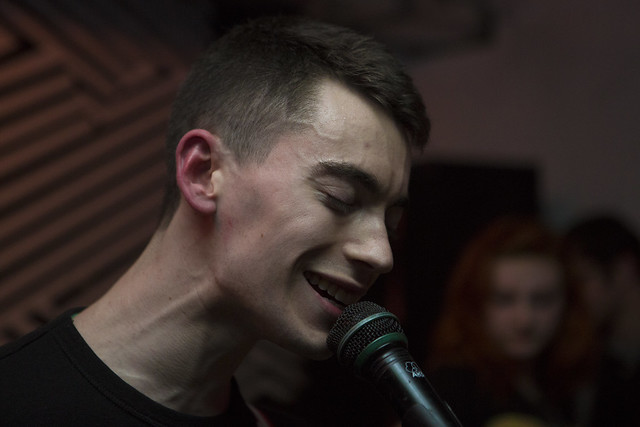 Jake Greve is a first-time Hear Nebraska contributor. Reach him via HN's managing editor at chancesp@hearnebraska.org.