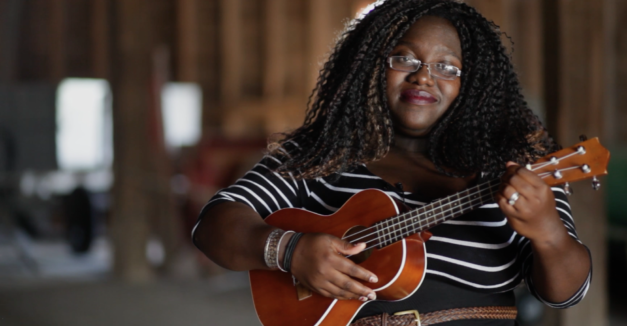 On a 100-degree afternoon in southern Nebraska, just a few miles outside of Red Cloud, the Starke Round Barn enhances its acreage’s charming view and provides a bit of shelter from the baking sun. Inside, the historic building provides a glimpse into farm life, equipment and parts dotting the wood-planked storage space around its outer edges.

Just past the Round Barn’s threshold, at the edge of the sunlight working its way in through the double doors, Edem Soul Music gave a spiritually uplifting rendition of her song “When I Fall,” as part of the Good Living Tour live performance video project. While unlike the rest of our subjects thus far, Edem is not from Red Cloud — she played the concert later that evening — her message applies universally. Everyone falls, she tells us, her vibrating, powerful voice providing a calming effect. It is no reason to fear or dismay; the fall is not inherently the end, but an opportunity to learn, to “defeat the pain” and begin to grow.

Watch Edem perform “When I Fall” below: