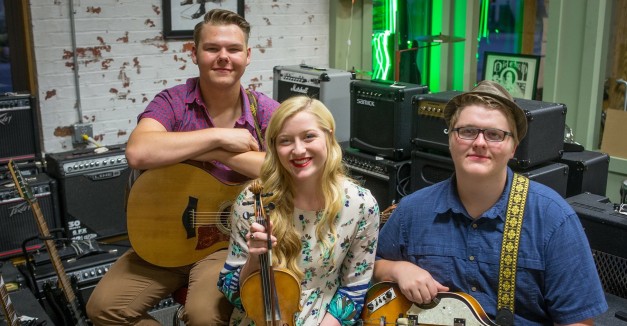 The allure with one-take videos like these — and the Love Drunk series, in particular — is finding a band in a space outside of its natural habitat.

The Wildwoods are no strangers to indoor venues. The harmonic duo of guitarist/vocalist Noah Gose and violinist/vocalist Chloe Pinkman ring sweetly in places like Vega and Zoo Bar, which they’ve played with frequency. Backed by Noah Pinkman’s country bass lines and Gose tapping a bright pink mini-kick, it makes for innocent folk.

And they play here inside Lincoln’s Roots Music, utilizing vocal reverb and meshing it with Chloe’s weeping violin to cast a slight mournful tone to start “Faithful Breathing” before its hopeful, heartfelt refrain.

For the most part, The Wildwoods play in places where you’d expect music this wholesome and folksy to exist: harvest parties, vineyards and apple orchards. It’s difficult to contextualize them within any kind of scene because they sit off to the side. The band seems to eschew that for simply connecting with audiences that might enjoy their music and spreading all over Greater Nebraska.

Outdoor spaces are befitting, but in two weeks, they can be found busking in an urban setting. The trio plays Tower Square Wednesday, Sept. 30 for Lincoln Calling (RSVP here).

In the meantime, see The Wildwoods performance in the latest Love Drunk episode: