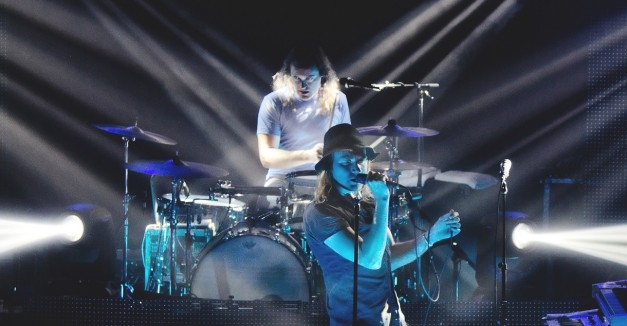 There are a few things a person can always expect from seeing The Faint live: they will entertain, they will play loud and, of course, people will dance. In that way, The Faint has proven reliable.

Friday night was no different as The Faint played to a passionate crowd at Sokol Auditorium.

The show was the first in a series of weekend performances for The Faint, including a free surprise show at Slowdown Sunday.

Though nearing the end of their two-month national tour for their new album, Doom Abuse, the Omaha band played both old favorites and new songs that mixed together to create a cohesive 21-song set.

Opener Solid Goldberg played like a mad scientist, creating intentionally distorted sounds as dizzying symbols and videos projected across his body and backdrop.

Frontman Dave Goldberg made gnarled sounds into his microphone as chaos reigned. “This is about killing my former band member,” Goldberg said as he introduced a song toward the end of his set. Some laughed, others looked at each other with unease. Whatever the intention, it was Solid Goldberg’s set and all we could do was watch as Goldberg’s musical creation came to life before our eyes.

The Sokol concert was the second-to-last show for Reptar on the Doom Abuse tour and the first Omaha show for frontman Graham Ulicny since he moved to the city in November.

From the time Reptar began playing to when they finished, the crowd had swelled to nearly three times its original size. Armed with beer cans, bodies quickly packed into the old auditorium.

Fog and light mixed and the silhouettes of The Faint appeared on stage. Without pause, the group began sing-chanting the opening lines to “Animal Needs,” a song from their new record.

Though the band’s songwriting process has never been concrete, Doom Abuse was even more of a fluid process. Songs like “Animal Needs,” were written on-the-fly as the band allowed the lyrics to come forth in a stream of consciousness.

As the band’s dance-punk sound surrounded the audience, people navigated near the front of the venue where people moshed, crowd-surfed and danced. One woman even attempted to walk on top of the crowd. With six albums and almost 20 years of performing in Omaha under their belt, it was the kind of high-energy experience that audiences have come to expect from a Faint show. The recent trend of EDM festivals and performances (Electric Daisy Carnival, Electric Forest, Life in Color) have provided dance-music lovers with a vast number of DJs and electronic groups. The effect, though, can be homogenizing, as in, it doesn’t matter who’s playing as long as the effect is still a high-energy show that makes the crowd dance. Though there are some big-name performers, such as Calvin Harris and Skrillex, the genre itself has the potential to overtake its performers.

There’s nothing interchangeable about The Faint. The passion seen at their live shows is proof that even audiences who love to thrash around to electronic sounds in crowded spaces, can create an attachment to a dance band. The reputation of the band’s performances has become as legendary as the sound they produce. They’re musicians who use their nearly two decades of experience and instrumentation to connect with their audience.

Only a few songs into The Faint’s set, the entirety of the auditorium gave in to the band’s infectious music. Even those lingering toward the back were moving their bodies along with the music in one way or another. The crowd knew what to expect and ran with it.

Frontman Todd Fink danced around stage with a voice that rotated between raw and digitized, a contrast that The Faint has always used to their advantage. As the band played the Blank-Wave Arcade track, “Victim Convenience,” dystopian black and white images and beams of white light lit up the venue.

The lights and music continued for the next 16 songs with almost no breaks. Fink stopped to thank the audience and those who helped with the album multiple times, but even those only lasted a few minutes. Drummer Clark Baechle was the MVP of the night as he performed, with intensity, the backbone to every Faint song.

New songs like “Damage Control,” were paired up with Danse Macabre songs “Take Me To The Hospital,” and “Let The Poison Spill From Your Throat.” The show was a display of both the evolution of the long-running band and the signature sounds they have kept intact. Though their new songs are purposefully less polished and more impulsive than previous releases, the same punk mentality and electronic undertones remain.

The Faint ended with the beloved, “Worked Up (So Sexual)” before taking the stage again for three encores.

The end began with Doom Abuse’s “Lesson From Darkness,” and ended with another favorite, “Glass Danse.”

As the final notes ended and the fog cleared, the audience, who were given the vigorous show they had expected, left sweaty and smiling.

See more photos of The Faint and Reptar: photos below from The Faint’s Sunday show at Slowdown Gabriella Martinez-Garro is a Hear Nebraska editorial intern. Reach her at gabriellamg@hearnebraska.org.