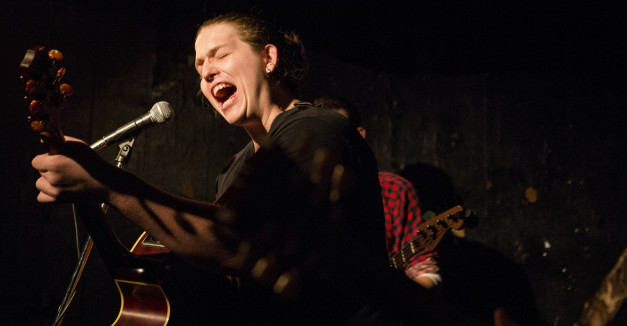 If you’ve been an attentive follower of Lincoln music the last year or so, you know Evan Bartels and his band The Stoney Lonesomes. You’ve seen, or at the very least heard of, their hybrid folk rock parties and seances. The frontman puts on a barroom show with a voice performing its own hyping and exorcism.

Or you might know them from their blue collar approach to local music, tackling long, several-hour sets, treating the scene like working musicians would. Or maybe you know them as the loudest performers of the Sower Records roots crew.

But since this is Bartels second time on this radio program, making him only our second repeat customer in two and a half years on the air, I’ll toss out a deeper dive theory on what I think makes Bartels’ songwriting voice so captivating.

His songs are — like so many in the last century of the folk and country genres — trying to conquer space. It’s a big state, a big country, a long life lived quickly, not to mention a big universe in songs that so often end up quipping with or kneeling in penitence to a higher power.

Bartels’ songwriting voice boasts a consistency of perspective and personality able to wrangle it all. His lyrics talk to lovers, bartenders, prophets and city populaces with a fatal-feeling honesty — poetic and sometimes funny in its unhurried, matter-of-factness.

Now, his may be a lone, if distinct, voice as of now calling out in obscurity, but you’re imparted with a worldview in these songs. And that makes a speck on vast terrain of railroads, highways, bars and sins, a speck on a lens you don’t want to stop looking through.

You can see Bartels and his full band this Friday at Hear Lincoln and on July 31 at the Nebraska Folk & Roots Festival.

And here’s an condensed version of our on-air interview:

Hear Nebraska: It’s kind of weird to think the last time on the show was only a year ago or so. But we’d never met and a lot of our conversation revolved around you finding your footing in the Lincoln music scene. Here we are, what, 15 months later and I feel like you’re in old pro. Do you feel that way at all?

Evan Bartels: What am I supposed to say, Chance? Yeah, I’m totally a professional now. I know exactly what I’m doing.

HN: Well, maybe you’d feel more comfortable thinking of as a testament to the Lincoln scene, which has no qualms about pushing an artist to its front when it likes the artist.

I don’t know what it is. We’ve been really lucky and really blessed to have fallen in with good group of people who enjoy seeing us play. And we enjoy seeing them play.

HN: Tell me about how this band came together with Andrew Standley on drums, Logan Bartels on bass and [Ben] Kramer on keys. It’s changed the complexion of a lot of what you do.

Jake Brandt: It definitely caused an immediate gear shift in what we were doing. Evan had this plan where it would start really stripped down and gradually add to it. Andrew was the start of bringing in new stuff. It was just a kick drum before and it’s hard to use electric guitars when that’s the extent of your percussion.

EB: I do want to make a note: We did go electric before Mumford and Sons.

HN: For people keeping tabs at home! … How did you two meet by the way? I’ve never asked you this.

HN: How did I not know that?

JB: Should I tell him about the warehouse days?

JB: When you’re the only guy who plays guitar in a town of 100 people [Tobias, Nebraska], you’re pretty much the raddest cat in town.

HN: You guys really do take a blue collar approach in a scene that, to its credit, tends to be a very artistic scene. You guys are out their hustling. That sense of repetition in performance doesn’t seem to bother you at all.

EB: It doesn’t? That’s great. That means we’re doing a really good job of keeping up our public appearance … That’s in jest. I think it’s just part of how I was raised. If we wanted something, you had to work for it.

JB: I don’t feel like it’s explicit competition, but there is so much good music happening here. Most of the time when anyone from Omaha or Lincoln puts out a record, it’s marvelous. We’re not trying to be better than anybody …

EB: But you wanna keep up with your friends.

HN: Before we get back to the music, any updated recording plans?

EB: We are going to put out a record. We’re going to start recording this fall. We’re gonna take a live show hiatus for a while and buckle down. We have the album written, but want to get it composed really well. Probably putting it out next spring.