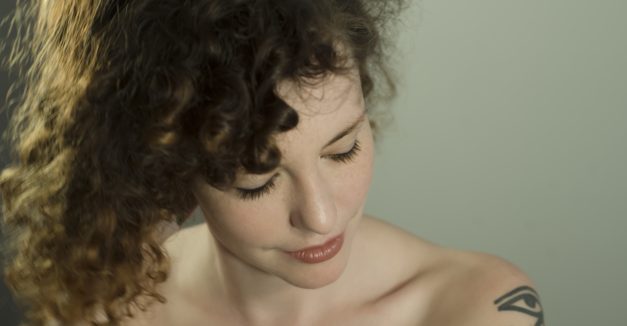 Coming off of her third solo album, Esmé Patterson is now on tour to showcase for the first time We Were Wild, an album full of unexpected sounds and emotions.

Patterson’s light voice combined with the hard guitar flares and quick and pronounced bass lines make her band a unique combo. The juxtaposition of normally-conflicting sounds within the full band is just as surprising, though satisfying, as the 180 degree turns the songs make within the album. While one song on the new album might have the feel of 60s rock and roll like the opening track “Feel Right”, others, like  “Guadalupe” bring a more folky, acoustic vibe to the 12-track album. The one consistent thing? Patterson’s crooning: soft, yet still muscular and uninhibited.

Her intelligence permeates through her songs. Perhaps the greatest example of the intellect and creativity guiding her musical process is her second solo album, Woman To Woman, a concept album that explores famous female characters in music. She takes Dolly Parton’s “Jolene” (the source of the album’s title) and gives the fictional woman depth by expanding her story in the song, “Never Chase a Man.”

When Dolly sings, “There’s nothing I can do to keep from crying when he calls your name, Jolene” and begs her not to take her man, Esme’s reimagining of Jolene responds, “Oh men they should be chasin’ you. Never chase a man.”

This feminist anthem reclaims the stories of the famous female characters and transforms them from surface-y manic pixie dream girls into heroine protagonists.

There’s a change in tone and mood in the lyrics from the woman power tunes in Woman to Woman to the more pensive and emotive thinking that happens in We Were Wild. Patterson’s change in scenery is perhaps reason for this mood swing as she relocated from Denver to Portland, Oregon between the two albums. She admits that a change of weather led to more introspective and “darker” songs in the latest album.

“In the rainy winters particularly, one is drawn inside by the cloudy, darker environment, and people are more prone to solitude and introspection,” Patterson says.

Hear Nebraska had a chance to chat with Esme via email about this change of scenery, her personal life and about her upcoming visit to Nebraska for Lincoln Calling (RSVP here).

Hear Nebraska: I’d love to chat about creating We Were Wild and how the creation of that music differed from the first two solo albums.

Esmé Patterson: We Were Wild was made in a very transitional time for me personally. I moved from Colorado to Portland and focused all of my energy on making a record of my own music about my feelings and my life, for the first time ever. I was always working on ten different things at once while making records, or working on someone else’s music, and it felt so intense and freeing and exciting to finally make something with all of my energy. I think that the way it sounds reflects all of that.

HN: How does self-awareness play into your music?

EP: I am working on being as “present” as possible. My songs, to me, are meditations on awareness and the fullness of feeling in each moment, on perspective and motion. So to answer your question, for me self-awareness is the goal and the means of achieving it.

HN: When did you realize you wanted to make music for a profession?

EP: When I dropped out of college to be in a band full time, exactly ten years ago.

HN: How has it felt to leave Colorado? I imagine that state played a part in your music, how do you think your sound is evolving with new Oregon air?

EP: I feel that geography deeply influences people, myself especially. The weather is so sunny in Colorado, it makes people very extroverted and gregarious. The music I made in Colorado was mostly joyful and “light” and I feel like the weather had a hand in that. In Oregon, in the rainy winters particularly, one is drawn inside by the cloudy, darker environment, and people are more prone to solitude and introspection. The music that I’ve written while living here feels “darker”, more moody and self-reflective.

HN: When you’re not creating music, what do you like to do with your free time?

EP: No one ever asks questions like that, cool! It feels like a first date question. Well, I am an avid reader, I like to ride my bike and cook and hang out with my sexy husband. I also love gambling and bowling and every cat.

HN: Do you know anything about Lincoln, Nebraska? What are some things you expect to see at Lincoln Calling?

EP: I played in Lincoln a few years ago and had a really rowdy, great time. Excited to be coming back but this time I won’t jump in the hotel pool with all my clothes on before I go out to the bars. The lineup for Lincoln Calling is stacked with rad music and comedy, I’m looking forward to catching my friends Eros and the Eschaton, Simon Joyner, and Adam Cayton-Holland, and my label mates on Grand Jury: Twin Peaks!

Ingrid Holmquist is a reporter for the Lincoln Journal Star and a Hear Nebraska contributor. Reach her via HN’s managing editor at andrews@hearnebraska.org