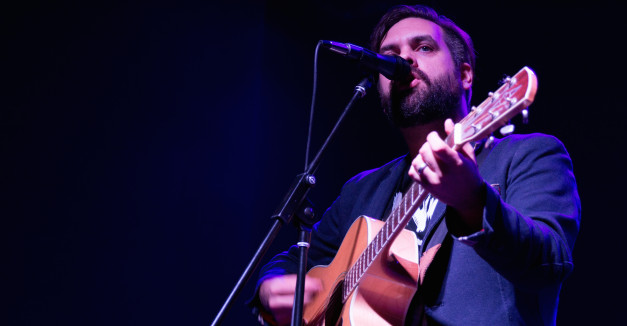 Editor’s note: Hear Nebraska’s annual Take Cover fundraiser asks Nebraska songwriters to play two songs — one original and one cover of a song by another Nebraska artist. Take Cover Lincoln is at The Bourbon on Jan. 30 (RSVP). Each year, we ask a handful of songwriters to discuss the songs they’ve chosen.

I always like playing with Carrie — I miss her when I play without her and it’s just a lot more fun with her — so I wanted to do one that we could do together.

She sang on the album version of the song, and I actually recorded her vocal takes in our basement at the time and then we sent them off to Tim and Co.

So, both of us are pretty familiar with the tune, which is a bonus considering we have two kids under two and, you know, time is valuable and hard to come by, and basically our lives are a chaotic sleep-deprived hell … I’m just kidding and we love our kids like crazy, but seriously, just showing up to this thing on time is going to be a challenge. Hopefully we realize what day it is.

And as people who have been in various long term relationships, and divorced and re-married and so on, maybe we’re uniquely qualified to sing a song about the various miseries of marriage and monogamy. We’re experienced. Ha, and I’m just kidding again, but seriously who is else is as qualified? We have been through this shit.

So, yeah, I hope everyone enjoys it.