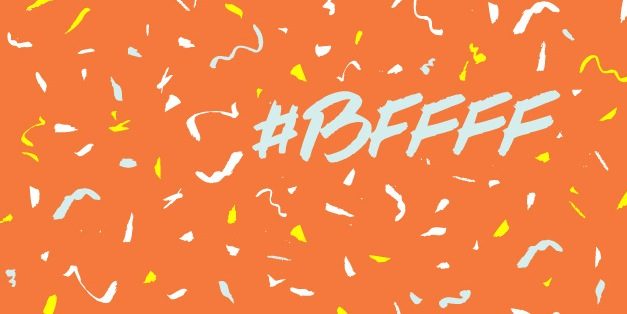 I am the luckiest person you know. I don’t even know how last year’s Benson First Friday Femme Fest went off without a hitch like it did.

Sure, there was a last minute cancellation, but I was able to call up singer-songwriter Virginia Tanous at the very, very last second and she drove down from Council Bluffs to play The Sydney. There was a small misunderstanding with a drum kit at Burke’s Pub, but miracle of miracles, the bands paced themselves so everyone was on schedule and everything was just fine. Jake’s badass Block Party was on full display. I saw musicians connecting at every venue and I had friends telling me it was the safest they’d ever felt walking around in Benson at night.

Before the night was even over, before LIFE is COOL had even started the after party at Sweatshop, I had booked Benson First Friday Femme Fest 2016.

Over my years watching the form of the music community shift and change, I am amazed at how quickly this has become a community consumed by women in music. The sheer number of us has drastically increased, and continues to do so, shaping some of the best music to come from our state.

To give that some perspective, in just its second year, BFF Femme Fest was able to add a dozen more bands, another venue and another hour or so onto the night. Fifty-six bands, and that doesn’t even touch the actual number of projects with a woman representing in the state of Nebraska in 2016.

So I hope to see everyone out and about and connecting and conspiring and, in the words of The Mynabirds, singing “Fire! Fire! Fire! Fire!” Because hell yeah, WE ARE A WILDFIRE.

In anticipation of this year’s Femme Fest, I wanted to give you a heads up on some bands who haven’t really been covered by Hear Nebraska yet, and who should definitely get your attention this Friday night.

*Denotes an All Ages venue.

Dani Cleveland is an R&B vocalist who has been performing in Omaha for fifteen years. Hers is a name I’ve seen so often, but until now have not been privileged to see in person. Cleveland has a gravelly soprano voice that, on first listen, seems all sweet and sunshine, but on closer examination evokes the gravity of Mary J Blige.

Have you ever heard something so ridiculously beautiful it made you angry? Angry that you didn’t know it existed and that it existed so close to home? So angry you just had to throw something? Last year, I was with Cortney Kirby of Freakabout in Benson when we happened upon Mariachi Zapata. One of the more unassuming string players shyly stepped up to the mic and the world lit up with color. Robles has a lush pop mezzo soprano with a vibrato that knocked me right between the eyes. My jacket barely withstood the impact as I hurled it to the ground. It is for certain something to be experienced in person.

Erin McMorrow, aka Sharkweek, is the second of two DJs we have scheduled at Femme Fest. Sharkweek describes her approach to the decks as “a frenzied selection of low ridin’ hip hop, deep dubstep, glitch hop, and mash ups,” and “Meatbeats and Sharkstep.” I suggest if you’ve come to Femme Fest with the intention of dancing, that you certainly make your way to Reverb for the last two sets of the night.

Just edging out the Omaha Girls Rock band, Lions Tigers & Babes, and eeking past The Boner Killers who had their first performance last week, Annie Dilocker might be the newest project to debut in Omaha. Having worked out songs between open mic performances at the O’Leaver’s piano, Friday’s show will mark Dilocker’s first with her band. Dilocker’s songs are honest, blush-inducing, and meet with her zephyrous soprano and her piano, to create picture perfect indie pop.

When you receive a text message from CJ Mills asking you to check out a band and see if you can get them out to your festival, you do that thing. Mills is your headliner, after all. Shannon Barnes and her crew are a neo-soul band from Detroit, Michigan. If you’re feeling the need to groove, then move on over to Barley Street for this one.

Ethan Ray plays rock’n’roll in the truest, ballsiest form of the genre. It’s as if he’s been caught up with the spirit of Sister Rosetta Tharpe herself, and the only thing he’s capable of is spitting, sweating and rock’n’fuckin’roll.

Part piano-driven singer-songwriter, part garage, grunge, alt-rock, Molly Gaughan is at the perfect age to discover and reinterpret the 90s. One of the younger musicians to grace the festival, she’s not quite old enough to have been there, but she’s at that perfect age for the 20 year nostalgia cycle to hit, hard.

In 2015, Ragged Company was reborn. A band for nine years, playing solemn Americana with some of Omaha’s most tenured musicians, Ragged Company found new life with new members, a new album release and new lungs. Adam Houghtelling fronts the group, as he has all these years, with his sweet storyteller voice, and Kristen Brandt’s low and slow vocal style follows his stories like a sinister ghost, giving each song a gray wash and dark undertone.

Aly Peeler has been making music in Omaha for nearly a decade. She runs arguably the most popular open mic in all of Nebraska at Down Under Lounge, owing largely to her unconditional acceptance and warm spirit. The ruby-throated ukulele lady plays festivals and bars and living rooms and stairwells and street corners and is everywhere–somehow without ever releasing a single recording. Her people are the evidence of her existence, and they are everywhere. Come catch a glimpse for yourself this Friday.

Emily Ward’s velvet voice is reminiscent of The Mynabird’s Laura Burhenn with piano-driven songs that might be inspired by Alice’s White Rabbit or any of Grimm’s dark characters. I honestly put Ward and Cat DeLuca together because of their dark pop sensibilities, and because frankly, it’ll be a great hour of music.

Vocalist Lori “Lorcore” Piper and drummer Tiffany “Thunder Goddess” Pilypaitis have been propulsive in the Omaha metal scene as The Clincher for a decade now. Their music is a mix of metal, blues, rock and aggression, unlike any performer you will see on the Femme Fest lineup. Broken double bass beats and cat scratch, shreading vocals are at the front of this band’s sound. The Clincher is Femme Fest’s first metal band. It is also my first metal band. I’m so excited I might die.