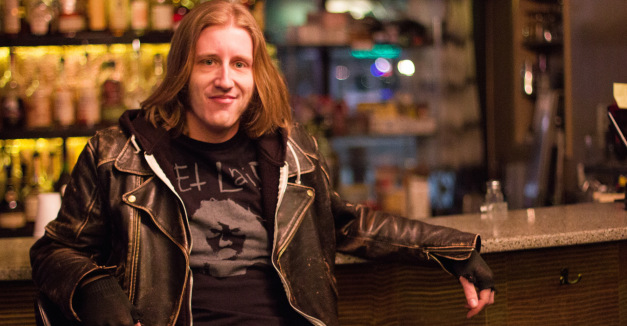 [Editor’s Note: Dustin “Duff” Hunke works publicity, the bar and the door at The Bourbon. He also hosted the metal/rock program “Heresy” on KRNU for the better part of a decade.]

There is no way I can make a conclusive “Top 5 Shows” list without months of time to think. Between going to shows, touring and working at a venue, I’ve seen a million great shows and I’ve probably forgotten most of them. I know the second I submit this I’m going to think of something that escapes me right now, so the list below is just a random collection of five shows that stick out in my head.

Trash Talk was originally supposed to play at Ghost House, but the house got a noise complaint and they had to quiet down or get ticketed. I was doing shows at Pi House down the street at the time, so we all scrambled to set up there as quick as we could. Trash Talk shows are super intense and that small living room was filled with people and crowd surfers. I don’t know how the ceiling fan didn’t [break]. They played maybe 20 minutes before we got a noise complaint from our nonexistent neighbors, but it was still one of the raddest punk shows I’ve been to. I hosted house shows on and off for five years, and these shows are the reason why.

I had never been into Judas Priest before this show, and I’ve been a big fan ever since. They were touring with Ozzfest, and I grabbed a cheap ticket last minute, mostly to go see Black Sabbath and Dimmu Borgir. Priest had just reunited with their original singer after more than a decade, and were itching to prove the classic lineup was still relevant. It started full on thunderstorming 20 minutes before they went on, right as their Electric Eye set piece started scanning the crowd with a huge laser. The band came out, played an awesome set and blew everyone away. 10 minutes later, the storm stopped for the night. Spooky and epic.

I was just starting to get into booking beyond house shows when I was contacted by Saviours’ management about a show. They had just put out Death’s Procession, and I had put it on the top of my Best of the Year list for Metalsucks, where I wrote at the time, so clearly I was going to do whatever I could to make it happen. Saviours killed, even though they claim they were all hammered. All the bands were great to work with and we had a proper after party at my house. Great night.

Someone decided it was a good idea to have Machete Archive play on three different floors of my house. We started running snakes and monitor cables through my vents at 2 in the afternoon, set up a sound board in a spare bedroom and rented cameras from UNL to document the whole thing. Master sound engineer Mitch Cady made it work, and they stayed super tight even through they were all so far apart from each other. As the place quickly filled up, we realized most people were only going to be able to see Saber play the main floor (if you even got in the house), but the whole experiment was pretty weird and cool.

Church of Misery rarely tour the United States, so I was disappointed to see they wouldn’t be coming anywhere around here when they announced their tour last year. They had some visa issues that prevented them from going to Canada, and I ended up bringing them to Duffy’s for an early show in December with barely two weeks of promotion. I didn’t expect a great turnout. Duffy’s was packed, and CoM played a crushing set of heavy jams to a super excited crowd.