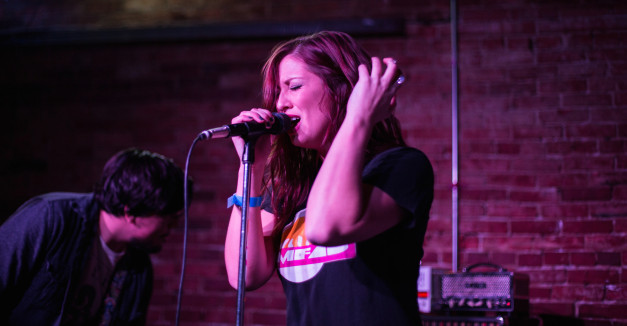 [Editor’s Note: This story is directed in large part at musicians thinking about striking out on the road or just starting out. Josh Hoyer, for example, has been touring for more than ten years. While his current tour of the South is an ambitious one, he’s says he and his band are in good spirits.]

Josh Hoyer is on the phone from somewhere between Savannah, Georgia and Charlottesville, Virginia. It’s an eight-hour drive for a night off. This three-week tour reaches as far from his Lincoln home as Florida.

The Lincoln bandleader is out trying to build an audience and make a name for Josh Hoyer and the Shadowboxers. He says tour has been going well, that the six-piece (nine-piece in Lincoln) received a great reception in places like Austin and Melbourne, Florida. He says that he’s making enough money to take good care of his band.

The next day, they’ll drive another seven hours to Columbus, Ohio.

It’s going well, but Hoyer sounds road-weary on the phone. It’s the band’s second sprawling tour in just a few months. He’s already thinking ahead to the next West Coast tour, projected for some time this summer and another southern tour after that.

“I want to play more regionally and build up more of a following, so we’re not on the road so much,” Hoyer says. “We’re doing another 5,000 mile tour right now.”

“Have your show together first. Have a nice video, a nice bio. Be able to sell yourself. If your band doesn’t have its shit together, you shouldn’t be out there. But once you’re ready, have a nice package … Be persistent. It took me three-and-a-half months to book a three-week tour. It’s a lot of work, dozens of hours a week of just being on the computer trying to contact people. Don’t let being turned down sway you from what you want to do, because it’s going to happen and you can’t take it personally.”

Still, Hoyer, who went on his first tour in 2004, sees touring as imperative for any artists trying to make their passion into their work.

“In order to sell records, you have to be on the road,” Hoyer says. “You can have shit online, but if people haven’t seen you in person, you’re only going so far.”

That’s what Des Moines-based Poison Control Center found in 2011. The band played 284 shows in 13 months. Guitarist and vocalist Patrick Fleming says the band sold almost all its records on the road versus in-stores or online.

Fleming spent 11 years playing in Poison Control Center. He now heads art-rock duo Gloom Balloon with Chris Ford and works at Vaudeville Mews. You could call the venue a Des Moines-equivalent of O’Leaver’s or Duffy’s.

“We also got tons of press just by being on the road constantly,” Fleming says.

“And above all the bullshit that is record sales and press, we became a better band,” he says.

“Book your own tours, be your own managers, make spreadsheets for merch, make everyone in the band responsible for duties. Know how much you need to make every night to pay for gas. Take a five dollar per diem a day to start for food out of the band fund. Treat it like a business … Be nice to everyone. Make friends, sleep on floors. But most importantly, play every show like it’s the last one you are ever going to play.”

While that’s not the ideal lifestyle for many people — and especially Hoyer who has a wife and two kids in Lincoln — if his band doesn’t return to the West Coast or the Deep South, why did they go there in the first place?

To get any kind of return on on the investments — the hours on the road, the gas money, the time away from home — you have to play the same spots, build an audience

Freakabout, active since 2011, went on tour for the first time in 2014. And the band hit it seriously, making several laps around the Midwest in just a few months. In March, Freakabout heads out for a month, its longest tour yet, after the release of its debut album.

A band should be ready to rope those people in. That means knowing how your live show works and how you want to play. Preferably have merchandise — buttons, stickers, t-shirts, something for the audience to remember you by. CDs may be a format on the way out, but they’re a cheap way to put your music into someone’s hands.

And the next time Freakabout comes through, she says, those people bring their friends. Then more money comes in from merch sales and the door.

“When we were first thinking about going out on tour, we thought it was super easy to hit up a venue. But we started off getting a lot of no’s because you have to sell yourself, you have to sell the band, you have to be professional. Don’t let the no’s discourage you because there will be some yes’s and the more you do it the easier it gets … There are plenty of people who have toured, just reach out. Reach out to me, reach out to whoever you look up to and ask for help.”

Jeremy Buckley, who books at Duffy’s and puts on the Lincoln Calling festival, lists Chicago’s The Kickback and White Mystery, Austin’s The Blind Pets and Indiana’s Joshua Powell and The Great Train Robbery as a few acts who have made Lincoln a regular stop and seen audiences grow for it.

Essentially, that’s how independent touring works. It seems like a slow and arduous way to build a national fanbase: 10 to 15 fans, one city at a time. But it’s also effective. One of the most effective tour models, like the fruits of touring itself, is to start small and slowly grow outward.

For a Nebraska act, it’s a lot easier to play Lawrence three times in a year than it is Atlanta or Portland once.

“Pick a route where the drives are short,” he says. “If you’re not in the van, you’re not paying for gas. It’s better to book a ten-day tour around the Midwest where you are never six hours away from Omaha than trying to make it to NYC and back in ten days.”

“Becoming friends with bands in other cities is huge and can make or break you,” says Dan Nissen.

Nissen considers developing a multi-city support system in the sparsely populated Midwest one of the most important part of regional tours.

“We have a hotbed of untapped talent,” Nissen says. “We need to support each other.”

Supporting and playing in similar-sized cities can be fruitful for your own scene, too. Omaha’s music scene doesn’t operate like Chicago’s or New York City’s. But it probably has a similar infrastructure to a place like Des Moines.

“I do all my booking through email, so I get a little put-off to see Facebook messages or to get phone calls about booking. It’s also pretty important to write a fairly professional, yet personal, booking email, and include links to music and social media. I have had a couple emails where people say they have been to our ‘bar’ before or some other totally wrong or generic thing. Those usually get deleted … It’s a fine line between asking for dates too early and too late. Sixty days is about perfect for us, and from booking my own tours, it’s usually about right for most venues.”

Fleming remembers looking to Omaha when he first started playing as a sort of ideal model for the then-fledgling Des Moines music scene. He recalls being amazed by the amount of good music coming from Omaha and the number of venues and record stores there to support it.

“It made us a better band,” he says of Poison Control Center. “Made us more confident, and it made us feel at home in cities where we were not from, but could relate to on a scene-basis. Traveling to other scenes lets you see how other cities work and you can take all the best things from those scenes and try to bring them back to yours.”

And in many ways, that’s what has happened in Des Moines and Ames, towns that share a similar relationship to Omaha and Lincoln. Today, central Iowa hosts Maximum Ames Records, 80/35 Music Festival, the newly announced Hinterland Music Festival, Gross Domestic Product festival, Little Big Fest, more than 20 venues with a capacity of 200 or more and the Des Moines Music Coalition, a non-profit dedicated to supporting the city’s music scene.

Nissen, who has been playing in bands for 15 years, does as much as he can to help out touring bands. He says at Total Drag, touring bands get most of the money made on the door.

“We try really hard to put together cohesive shows for touring bands with locals that will draw well,” he says.

Nissen, Kirby, Fleming and Hoyer encourage people to hit the road, but to do it intelligently, with business-savvy. There’s a network between Denver, Des Moines, Ames, Madison, Sioux Falls, Lawrence and more waiting to be tapped.

“Being in a touring band is amazing,” Fleming says. “You get to travel the country with your best friends, play music, meet new people, see new places. It’s like a modern day pirate or explorer.”