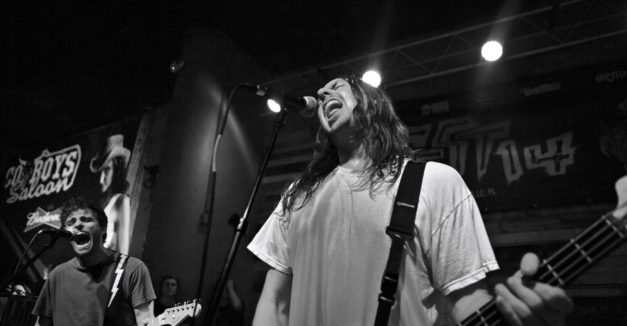 From the first few notes of “Discomfort Revisited,” the pain in Christian Holden’s voice is unmistakable. Congruent to its title, the pounding, shouting song plays as a repeated confessional, tearing at the sutures in wounds initially left by a fraying relationship — one marked by its partners struggle with mental and emotional illness.

At its Fest 14 performance, Wocester, Massachusettes band The Hotelier played like it had guts left to spill. In “Discomfort Revisited” — from acclaimed 2014 full-length Home, Like Noplace Is There — the internal struggle of another has affected the voice. And you can see it in the bassist/vocalist’s face as he surveys the crowd before the band crashes home. The release spreads universally throughout the venue, the dissipating pain a reminder of lessons learned and the strength it takes to move forward.

The Hotelier has drawn national attention as a leader in the “emo-revival” movement, especially in the wake of that sophomore LP. It dealt with Holden’s dark, toxic experiences with friends and loved-ones and served as a rallying cry for personal growth and transformation. The band rides the buzz into its third studio release, Goodness, out Friday, May 27 on Tiny Engines.