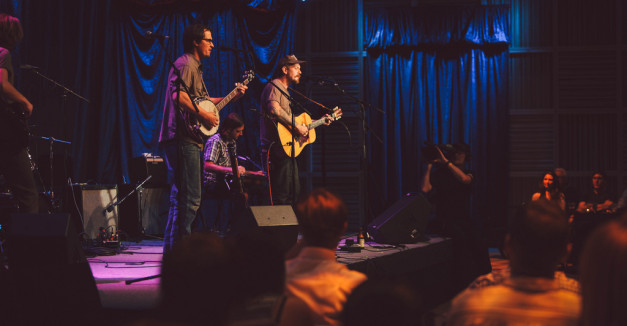 The way Kill County‘s Josh James asked his band a handful of times if they were ready to play.

The way Big Harp‘s Chris Senseney and Stefanie Drootin-Senseney kissed sweetly but quickly in between songs.

And the way Digital Leather‘s Shawn Foree warned the crowd at the Holland Center’s 1200 Club, “It’s gonna get weird.”

These snapshots tell only slivers of the story written by the three Nebraska bands booked for the first-ever Hear Nebraska: Live at the 1200 Club. But they are slivers of a story that could be part of television shows that live long past Friday’s concert.

NET filmed the performances, expertly maneuvering cameras through, over and around the crowd and musicians onstage. As shown in our photos below, the crew directed the show from their massive, tech-filled truck just outside the Holland Center.

Having partnered with Omaha Performing Arts and NET, we at Hear Nebraska watched the story unfold among a crowd of fellow journalists, musicians, festival organizers, record label employees and fans. It was a wonderful night, and we look forward to reliving it when NET airs the performances sometime this fall.

Until then, let’s pick an album to play, and watch our slideshows of photos:

Behind the Scenes with NET

Michael Todd is Hear Nebraska’s managing editor. He knows what you’re thinking, and he agrees: Bridget is the bomb. Reach Michael at michaeltodd@hearnebraska.org.