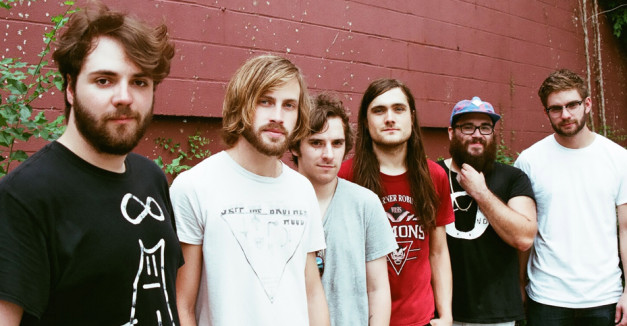 The band name is hard to write without a smirk or giggle, but for guitarist Emmett Miller, “Diarrhea Planet” doesn’t evoke an alarming visual of a cosmic fecal explosion.

The Nashville band formed after the six members left the school of music at Belmont University. The genre-blending rock, pop and punk band is known for its rowdy stage performances and four guitarists who, at points, sound like they may be soloing at the same time. Diarrhea Planet brings a certain stentorian decibel to a room that could leave a kink in a neck from head banging. The 2013 album, I’m Rich Beyond Your Wildest Dreams sparked the band’s momentum, which then continued in to their most recent EP, Aliens in the Outfield.

Coming off a successful year in the indie pop/rock/punk/whatever-you-call-it scene are on the road again. After a pair of Missouri stops, the band will perform in Nebraska for the first time on Sunday, May 17. RSVP to the Vega show, with Left & Right, Bogusman and Calm Fur.

Hear Nebraska spoke with guitarists Emmett Miller and Evan Bird over the phone as they braved Nashville rush hour. The two left band practice and were on their way to local music shops to run errands for the impending tour.

Hear Nebraska: Your sound has taken on a number of genres. In my opinion, the new stuff sounds like pop-punk with a flare of ’70s rock and roll. Today, how would you describe Diarrhea Planet’s sound?

Emmett Miller: Like seeing School of Rock for the first time. I think you nailed it. Maybe like early metal played through the filter of a punk band with pop hooks.

HN: You’ve been called a lot of things, in terms of genre, but what’s a genre you find influential, but that no one ever tags your music with?

EM: Yeah, I don’t know. I just named that I think. I like the idea of having pop and power pop, the really frenetic paced pop kinda thing. What power pop is to pop, I like to think we’re that to rock.

HN: And you don’t think you’re called that enough?

EM: Oh, it’s fine. I think it’s kind of cool that nowadays it’s kind of impossible to say, ‘you guys sound so one-word answer.’ There’s so much music accessible now that we can more readily draw these kinds of comparisons and I think being able to describe something in new ways kind of informs of how we understand it.

Call us whatever you want.

HN: You guys are from Nashville, correct?

HN: Nashville is widely known as the place for country artists to claim their fame. Though bands like JEFF the Brotherhood, Pujol, Turbo Fruits and Diarrhea Planet seem to be doing alright. But in the overall Nashville music scene, did you ever feel like a fish out of water?

EM: Not at all. Nashville’s had an emerging rock scene for a long time. It hasn’t always been at the forefront, but it’s always been there. It might not have quite as much commercial drive or the roots as the country stuff, but it’s been there. It never felt like a fish out of water by any means. Our label Infinity Cat kind of paved the way for independent acts to come up in the Nashville scene and then went on to escalate that into a national touring career. So we really stand on the shoulders of giants, in that regard.

HN: What would you say is the biggest misconception about Nashville, the music city?

EM: A lot of people think that everyone is born with a Callaham in their hands, when really they’re born with Stratocasters.

HN: So you all went to music school, right?

EM: Yes, we all went to Belmont University.

HN: So, you went to music school, graduated, started touring with a band called Diarrhea Planet … what did the moms and dads of the group think?

EM: I can’t speak for anyone else’s parents, but I was really surprised at how my mom took it. She took it in strides definitely, but I thought she was kinda freak out. But she actually got kinda emotional like, “Oh, I’m so proud of you!’ They’re all glad that we’re doing something that we really love. Not many people can say that.

HN: Describe to me the visual that comes to mind when you hear the name “diarrhea planet.”

EM: I try not to think about that too much. Diarrhia planet. I don’t know, I’d rather not imagine it. I’m going to toss this to Evan. [Who is sitting in the backseat.]

Evan says that if you say it enough times it kind of loses its visual. If you say it twice a week for a month, then you won’t think twice about it.

HN: That’s probably a good thing for you guys, huh?

Evan Bird: Ya. If you Google search it, Ingrid, just make sure you safe search it and click away fast.

HN: At any point did you think, “Oh wow, guys, maybe this name doesn’t sound that appealing?” or was that kind of what brought you to name yourself after such a disgusting visual?

EM: [Singer] Jordan [Smith] always wanted a band name to be gross. It wasn’t really the name that caught us off guard; it was that people started paying attention.

HN: I read once that another idea for the band name was “The Don Knotts Bowel Movement.”

EM: Yeah. Jordan recorded a series of grind core demos and that was initially going to be Diarrhea Planet and then that remained it’s own thing with Kevin Donahue as the founding members … but he’s no longer with us. Geez, it sounds like he’s dead. He’s just no longer in the band and he’s just an incredible songwriter. He had more of a pop thing, so Diarrhea Planet took a different turn.

HN: Well, both of those proposed names are awesomely offensive and both have shit as the common theme. From where does this obsession with fecal matter derive?

EM: (Laugh.) You’d have to ask Jordan on that one. We’re just hired along in this mess. It’s under further investigation. We’ll release a fresh statement as soon as we get to the bottom of the matter.

HN: Would you say that you’re weeding out the feint of heart before they even hear the music?

EM: Certainly. The name acts as a litmus test of sorts. I think that our fans bring a certain fanaticism to the table. I don’t know if I’ve ever met just a casual DP fan. Like ‘Oh, those guys are OK.’ I think it’s pretty polarizing.

HN: I’d really love to see an album cover depiction what a Diarrhea Planet would look like… or maybe I wouldn’t. Either way, where is that album art hiding?

HN: Do you think that having such an offensively crude band name ever keeps you from specific goals because of artists, recorders, venues etc. that may find it too vile to promote?

EM: I think the most hilarious example is that we were declined for Taco Bell’s “feed the beat” program – a campaign they have in which they send bands 100 five-dollar gift certificates to feed bands on the road. We were declined for that explicitly because of the name. It was also really tough to find a booking agent that would touch us because of the name. Our guy John Prine was the first and he’s still with us.

EM: Oh yeah. We started out as a party band that was pretty jarring so people always brought that intensity. I like to think that just having four guitars makes a band so damn loud that it has such a visceral impact that it makes people react in a very visceral way.

HN: Ya, definitely. So you come to Nebraska this Sunday. Will this be your first time touring through here?

EM: Ya, this will be our first time.

HN: That’s exciting. Well, one of the Hear Nebraska photographers said about Diarrhea Planet that it would be a “photographer’s dream to shoot.” Why are your gigs so inherently visual?

HN: You’re known for your four guitarists just going nuts. How much of a nightmare would it be if you were forced to play acoustic? What would you do?

EM: Oh, we’ve been asked to do that before. We don’t really do that. For, like, radio sessions or in-store performances, we have little practice amps we do. If we did acoustic, it’d be pretty hilarious.

HN: Ah, so you’ve been asked, but always declined.

HN: Now, I’m curious with this being your first time performing here, what’s your outsider perception of Nebraska?

EM: My only experience with Nebraska is that I went to the Omaha zoo one time and that was incredible and then the Bruce Springstean album. That’s about all I got.

HN: Well, what would you say to Lincolnites to get them to come to the gig at Vega on Sunday?

EM: Bring money, or else.

HN: Would you say the crowd could expect to hear more from I’m Rich Beyond Your Wildest Dreams, Aliens in the Outfield or some varied assortment from your discography?

EM: We’ve been playing a mix of everything. Everything from Aloha, Yama-Uba, and all the way to Aliens In The Outfield, it’s a good smattering and we have a couple secret covers. Who knows, it remains to be seen. (And) we might even surprise ourselves.

HN: Well, you’re known to play some covers that many wouldn’t expect from a pop-punk band, i.e., Bruce Springsteen, Third Eye blind, etc. Not that Bruce isn’t a lovely choice, but it seems kind of like an odd fit. How does your band decide whom to cover?

EM: We try to do songs that everybody will know. We tried a while back “goodbye horses”, that tune that’s in American Psycho where he’s like looking in the mirror and that was kind of a bust. So, ya, we try to keep it to the realm of radio hits. Other than that, anything is fair game.

HN: So you like to keep it so people know the songs so people can be like, ‘Woo, that’s my jam.’?

EM: Absolutely. We have to keep the momentum up. We gotta make it feel like a DP song so people can know the words and shout along.

HN: So Diarrhea planet had a really great year last year. But there’s so much gray area to what makes a year a great, so tell me, what is your definition of a successful year?

EM: Well we keep getting more and more success. I mean, before we released Aliens In The Outfield we were touring with an album that was two years old and still picking up momentum. We got to play Bonnaroo, Hangout Fest, Governors Fest, and Pickathon. This year we’ve got Folk Castle, or Folk Soul if you’re a sailor I guess, we’re doing Sasquatch.

HN: So would you say the ability to do all of these festivals and being picked up makes a good year?

HN: What are you looking forward to most about the upcoming tour now that you’re in the process of heading on out? You’re now headed to the guitar store to get everything fixed up, and what are the feelings, thoughts and hopes for the upcoming tour?

EM: We’re gonna be back on the West Coast again.

And what are you looing forward to most, Evan? Sasquatch. Oh, ya, we’re doin Sasquatch and we’re gonna knock that one out of the park. Not to toot our own horn, but we’re gonna crush that one.

HN: Is there anything else I didn’t ask that you’d like to add?

HN: (laughs) You mentioned that.