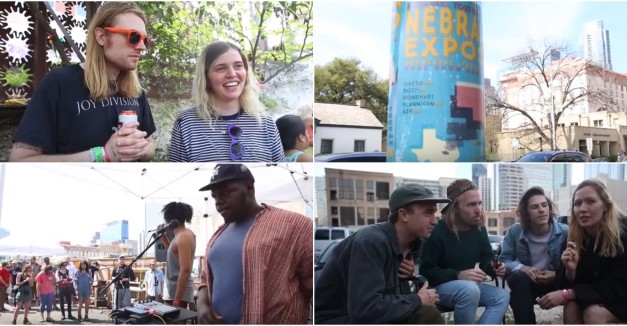 From across the Atlantic, Nebraska can attract a few seemingly-ridiculous or shallow characterizations. Some are outlandish – It sounds like Alaska; are there mountains? Do you worry about bears? And then the one we all know — there’s a lot of corn, right?

Residents of the Cornhusker State can characterize it much more deeply. Many of its musicians have a deep understanding of their own community and, maybe, its context within the larger state. Its strength and sonic diversity was on display at the Nebraska Exposed showcase Wednesday of SXSW.

But we wanted to find out what Nebraska looks like from myriad outside perspectives, from those who have toured through the state or, more generally, the Midwest to those who have merely seen it on a map. What do they know about Nebraska? Have they played here, and if so, why would they return?

During our recent trip to SXSW, we interviewed a handful of touring bands from as far as Australia and the United Kingdom, asking what they know about Nebraska and its music scene and about the makeup of their own music communities. We found that from emerging non-traditional spaces to artist diversity, some aspects aren’t so different. Watch below for testimony from stateside bands Worriers, All Dogs, Lewis Del Mar and international acts Fear of Men, Julia Jacklin and more: