Where to begin? I have been a full-time (ish), touring musician for just under 10 years. I have played over 1,000 shows all over the world.

Now I see that people who are famous for being themselves are like Paris Hilton, or end up on Jersey Shore. At least if I played by the music industry's "imaginary rules," I might have ended up on the soundtrack for Jersey Shore, instead of just watching it.

At the end of the big tour I did last year supporting my new record Tickled Pink, I knew it just wasn't going to happen. TSITR had become the kind of band that people "loved," but also were kind of done supporting. They had paid the cover the past few times I had come to town, and the novelty was just gone. The records sold less and less each year, and crowds just dwindled. I had come full circle, from house shows to small bars to big clubs to big support tours, to clubs, bars and finally house shows with lots of days off.

To put this in perspective for you, on the full 45-day tour, I was paid less than $1,500 total. That's less than $250 a week. Can you imagine trying to tour with that kind of budget?

I am no stranger to debt, or to suffering for my art. For the first five years of my touring, I was happy to drive around the country, sleeping at rest stops and in grocery store parking lots, scraping money together. When things finally started to "click" for me, it was the best feeling in the world. I thought all my hard work and dedication had finally paid off (which it had). To watch all of that just fall apart is too much.

Return Of The Microthrone by The Show Is The Rainbow from Ingrained on Vimeo.

TSITR sort of hit a stride, one that, on the outside, seemed like everything was going really well. I was touring, releasing vinyl, going overseas, etc., but, as I was doing all of that, I was also constantly living beyond my means, just a little bit, in hopes of taking my band to the "next level."

As the popularity seemed to die, I was still very respected in many circles, and was able to book tours and release albums, but people just stopped showing up and stopped buying my records. Again, for reference, Tickled Pink has had less than $70 paid for it digitally (it was released as a pay-what-you-want record), and has sold only about 120 copies on vinyl: not even close to enough to pay off the pressing costs.

It's hard to discuss this without sounding bitchy, but I will just say, there are lots of people, all over america who tell me the love TSITR, but who haven't seen me play in years, and who haven't purchased an album ever.

This is a (nearly) verbatim conversation I had at a recent Touch People show.

"Why don't you play as TSITR anymore?"

"When was the last time you saw me play?"

"Have you ever bought one of my records?"

So why the fuck does this kid care? When I needed his support and he was nowhere to be found, and now he's asking me why I don't want to continue throwing money at a band he chooses to ignore anyway. 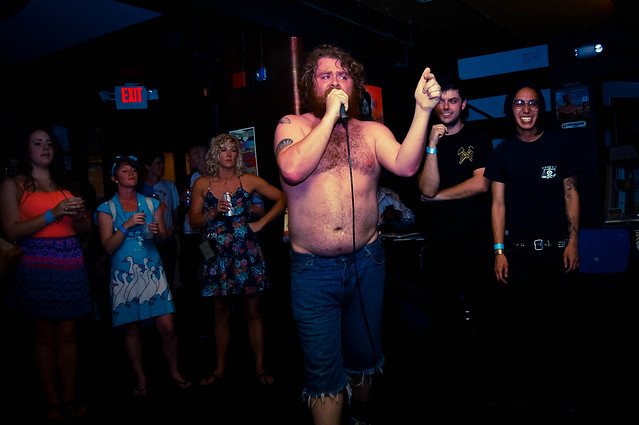 I've been reading about self-centered people, in hopes of bettering myself, and what I've learned is that self-centered people end up lonely because, even when we aren't bitching, we still require lots of energy to keep up with. I don't blame people for being "over" TSITR, over my bullshit rockstar attitude, over my shit-talking on stage, over my disregard for the "touch barrier," over buying records that aren't as good as the live shows, over paying to see live shows that were shocking years ago, and now just feel boring. I really don't.

I used to be able to grab a mic and say "I'm the best, coolest motherfucker in this room." I said stuff like that, because I meant it, but I just don't feel that way anymore. I've lost my edge, and I don't know how to get it back.

I love you all, and I will still be making music. I never thought I'd break up TSITR, but I suppose, the hardest lesson for a musician to learn is, just because you can make a song, doesn't mean you have to.

PS: I will be doing two final TSITR shows. One at Hullabaloo in Elkhorn, and one this December. This December will be 10 years of TSITR. Seems like a reasonable time to end it with a big show TBA at The Bourbon, no?

Darren Keen has a lot of sci-fi tattoos and makes a lot of experimental electronic music. Leave your thoughts in the comments below.