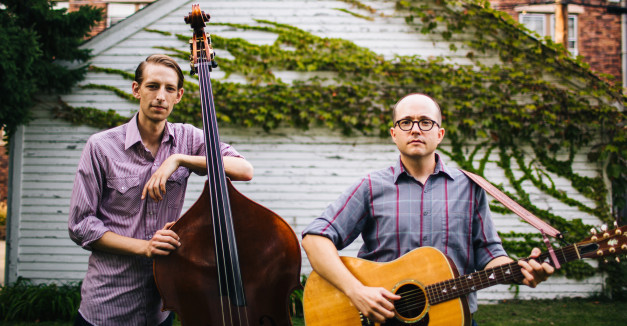 The following interview previews McCarthy Trenching’s concert at The Holland Center’s 1200 Club this Saturday, May 6. High Up opens the show, which starts at 8 p.m.  Tickets are $15; purchase them here.

Every song has a tone. It is the invisible hand that reaches out from a composition’s component parts and tugs similarly at most listeners. “London Calling” reeks of pulsating desperation. Kanye West’s “Power” just feels like it’s about the seizing of power. “Nothing Compares To U” might compel you to shave your head and gaze into a mirror even if you’ve never seen or heard Sinead O’Connor voice the famous lament. Every song has a tone, but not every song has a sentiment.

To deliver a sentiment, the tonal hand has to be more than just detectable; it has to weave and be woven into the lyrics, slipping the listener a message in a near-tangible way. Hang in there. Or, pull it together. Or, “You don’t have to get on your knees and pray / just know when to call it a day / to keep the devil away.”

McCarthy Trenching songs routinely wield a sentiment, an unmissable emotional core that makes them feel deliberately and familiarly authored by one person. One of Dan McCarthy’s best-known folk tunes, “To an Aesthete Dying Young,” may be about penning a letter of encouragement to a distant friend, but many more of his songs feel as though they’re to a person or to their audience, musical letters with a wish for something else attached. (By the way, don’t be tricked into spending a few thousand words thinking this means the songs are autobiographical. Or do; it’ll be good for you.) And for as much as the Omaha duo’s music will always be relayed via McCarthy’s deft guitar and piano and the ever-resonant, highly musical upright bass of James Maakestad, they run an understated gamut of sentiments.

On Trenching’s most recent LP, 2015’s More Like It, the album’s tone is consistent: humble, mostly cheerful acoustic contemplations. But McCarthy’s lyrics explore poles: from heightening silent irritation to knee-slapping levels, all the way to the deep, time-bending empathy of imagining your mother’s life years before your birth. The former is comically permissive — it’s funny to be pissed off about nothing that serious — and the latter is beautifully decent in its simple artistic act. The ability to so explicitly convey humor or hope, a penetrating glare or an understanding nod, without heavy hands makes McCarthy Trenching a Nebraska music mainstay.

McCarthy and Maakestad play at The Holland Center’s 1200 Club this Saturday, and they’re joined on the billing by Christine and Orenda Fink’s Omaha soul band High Up. (Tickets are available here.) I called Dan McCarthy this past weekend to preview the show, discuss his recent milestone playing ragtime piano, reflect on his late start writing lyrical music and zip through a speed round of questions to cap things off.

Hear Nebraska: You’ve played on the 1200 Club stage before doing keys for Big Harp at that first NET suite of shows. What’s that stage like for you?

Dan McCarthy: They build it for the show, so it’s not always there in that room. It’s not too high and pretty friendly … not a lot of separation from the room. They are going to have a big piano, possibly a concert grand. They keep all their pianos in beautiful shape.

DM: That’s true. When we played at Film Streams for the Buster Keaton movie Sherlock Jr., we arranged piano and bass versions of a bunch of Scott Joplin music. James composed his bass parts. We’re gonna perform “The Favorite,” which is on the piano record, and “Elite Syncopations,” which is the most barn-burning of the showstoppers — sorry to mix metaphors — but it has a last section that’s impressive when you pull it off. And I actually made a set list for this show, which I never do.

DM: Well, you know how I like to ask James…

DM: So this time we did make a set list since we’re playing for an hour. Also, we’ve got the High Up horns … Luke Annis and Orenda Fink are gonna sit in with us for a couple tunes, which I’m really excited about.

HN: I was trying to think of various, more dramatic places you’ve played Trenching sets: Harvest The Hope, the amphitheater in Scottsbluff on the Good Living Tour, a garden party for some draft horses…

HN: [Laughs.] Is the preparation calculus any different for you when you’re going to be in such a pristine room? Do you find yourself thinking more about precision?

DM: With the rags, I can let myself get away with some sloppiness in the weekly gigs. But in a duet, the sloppiness shows … if you’re playing different notes that are not harmonic.

HN: So you just wrapped up a month of playing the complete collection of Scott Joplin rags at Pageturners, including some really deep cuts, or deep sheets maybe we should call them.

HN: We’d talked a bit about the completist nature of such a project that’s mostly for you and kind of creating a benchmark for your experience with ragtime piano. Does it feel like you’ve reached a benchmark now that you’ve done it?

DM: Like you say, it’s mostly for me. If you decide you’re going to read all of William Faulkner, you’re gonna get into some pretty bad books. If you decide you’re going to play all of Joplin’s rags, there are some stinkers in there. Maybe he did one for money, or maybe it was a half-baked idea. I thought at first the rag “Leola” was a shitty imitation of “Maple Leaf Rag” and not quite as good as “Gladiolus Rag,” but then you work on it a little more and it’s like, “Oh yeah, ‘Leola’ does have its charms.” But there’s no reason to keep those in my repertoire, and I don’t think anyone will notice. Completism is a tendency I have; the resonances you get from art spanning decades is really, really satisfying.

HN: You read more than about anyone I know. You’re a very open consumer of art. How does that influence or not influence your songwriting? I never think of your songs as overly referential or having their feet off the ground in some literary conversation. You still seem to write very much about a common life, or life at a street level.

DM: I try to take a lot of editing and care with regard to songwriting. Part of what shapes the songs is that I spend most of my time playing in bars in Omaha. There’s all kinds of music played in bars in Omaha, but for me to try and represent myself and what I care about, it seems the daily stuff just works best.

HN: If literature is not a paradigm for you when you write songs, I want to ask about math. When I think about the references in “Hard Heart” and “Air Force One,” you seem to be thinking about math as metaphorical to life. When you look at the world do you see math? Is it a paradigm for you?

DM: I believe [math] is real in the universe and humans are just discovering it, and that’s not founded on any deep philosophical understanding. And as far as understanding the fundamentals of reality, I don’t understand physics enough, and I don’t believe in religion, so I guess math, as a way to understand reality, is kinda the one for me.

HN: Do you ever feel like you’re drawn to math in a songwriting headspace because if you think it’s an order to things and you’re trying to put an A-rhyme and B-rhyme together and you’re working in an order of things … is there a magnetism there?

DM: Especially if you were taught the way I was taught music, which was reading sheet music at the piano; it’s very count-y. And then playing in other people’s bands … I think about that as numbers in the structure of a song and in the intervals. You know when you’re writing a song and it feels like sparks are flying and you’re in a zone? That’s the space in my brain that used to work really well at math.

HN: A biography question I’ve never asked you: Did you start writing lyrical music in your mid-20s?

HN: That seems like such an anomaly. People write songs when they’re teenagers because of the very obvious emotional, solipsistic need to do that. What made you start writing lyrical music in your mid-20s?

DM: Again, the way I learned music was not at all an expressive or creative way.

HN: It was the math-way.

DM: The math-way, and in a mechanical way. You read the notes and you make them come out by pressing the buttons. Not that that can’t be expressive, but it’s so separate from having something to say. So in high school, I wrote some poems for the literary magazine or whatever; don’t go find them. But to even be able to play an instrument and come up with a song, that didn’t happen until college.

Eventually you play enough of other people’s music, hanging around bars and listening to country music … and I loved Johnny Cash’s American Recordings so much. A lot of my early stuff now feels almost dumbly country. I was almost denying how literary and bookish my interests actually are.

HN: “My Old Ways” seems as though from an entirely different person than, say, “Ogallala Aquifer.”

DM: You know, I joke around that I repudiate all my material before James joined the band, but it’s kinda true. There’s some decent song craft, but nothing I really want to sing about now.

HN: Well, let me pick up on a song from that era that you still play all the time: “To an Aesthete Dying Young,” or I guess you just call it “Douglas Street” now in your set lists that I’ve just learned aren’t real. What keeps that song staying with you? Is it the craft, or is it the sentiment of well-wishing in trying times that feels forever appropriate and touching?

DM: That song is funny because think about the title. It’s so totally pretentious. It’s named after an A.E. Housman poem. Give me a break. But some of the best lines — “the moon scores a field goal through the steeples of the cathedral” — I stole from a real letter a friend wrote me. It makes me not so tired of it. And then truly, it’s kind of the sing-along that makes it nice too.

HN: Are you ready for a speed round?

DM: Do I have to keep track of the time?

HN: Nah. Here we go. What should we take away from the fact that four of your five albums have animals on the covers?

DM: That I don’t want to put a picture of myself on there.

HN: Do you have an official take on The Sting and Marvin Hamlisch?

DM: I think it’s a great soundtrack and it did wonders for ragtime. Hamlisch never claimed to be a great ragtime player, but the band arrangement for that movie are great, I think.

HN: When was the last time you bugged James to release some form of his solo work?

HN: What song of yours feels the least like you now?

HN: Is Bob Dylan’s Self Portrait still in your disc changer?

HN: How many months are we going on now?

HN: What’s your favorite quality of High Up?

DM: I believe that’s the address of the Holland Center. I like that this is a quiz now.

HN: Is there a better feeling when performing live than when you have to laugh at the fact that people are laughing at one of your lyrics?