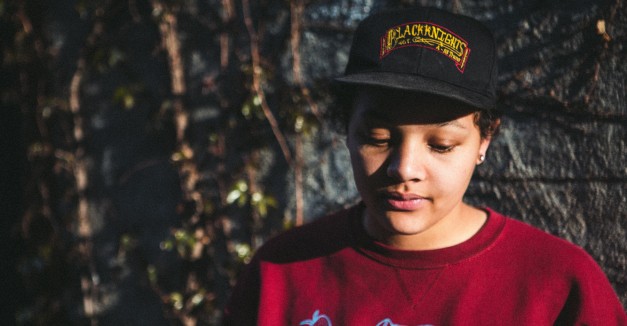 An Old Market street corner may be a less-than-intimate venue to pour out one’s heart, but it seems not to phase Jocelyn. She plucks a few chords, and in a rich, mournful voice, laments a past love revisited only in her dreams. Though togetherness has passed, the love burns as strongly as her gaze.

Despite her youth, the Omaha singer/songwriter feels at home as she surveys the ever-changing crowd from her sidewalk spot. What once was a forced endeavor, overcoming fears by playing for faceless strangers, now has become a way for her to deliver the music community word for whomever stops to listen.

“Over time my meaning for playing on the corner changed,” Jocelyn says. “Now it’s for people to come to Omaha or people that live in Omaha to recognize that we have a beautiful music scene and to share what I know with random people of the world.”

Jocelyn has carved out her own performance niche since first picking up the guitar in 2013. The two-time Omaha Entertainment and Arts Award nominee appears regularly at open mic nights around Omaha, has recorded an impressive YouTube catalogue of pop cover songs (her chief influence Ed Sheeran among them) and famously busks down at the Old Market.

That’s where we caught up with Jocelyn on a recent weekend afternoon, where she sang “Daisy Skies” for anyone and everyone that passed. Watch Jocelyn’s engaging street-side performance below: