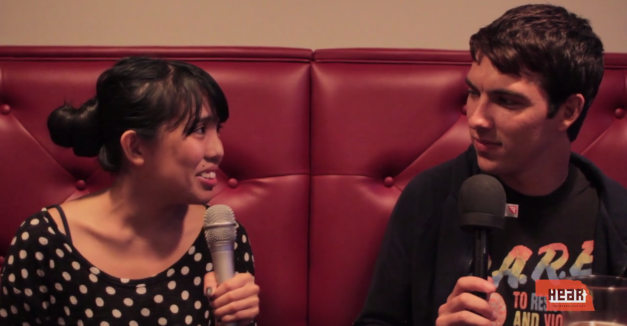 [Editor’s note: welcome to the first edition of HN’s Crossfade series, in which we simply ask musicians to interview other musicians. In the inaugural episode, Sara Bertuldo of Millions of Boys and See Through Dresses has the mic.]

When Joyce Manor stepped onto the stage Sept. 10, sandwiched between the impossible speed of Radkey and the deafening political criticism of Desaparecidos, the Torrence, Calif., band quickly settled into its sweet-spot: emotional fireworks that ignite immediately and dissipate in kind.

It would border on the impatient if these songs weren’t written with intent. Frontman Barry Johnson wears his heart on his sleeve, seemingly ridden with ache to get them out. But then it’s over, and he’s said his piece; the show need not go on any longer.

Joyce Manor’s latest LP, Never Hungover Again, is bullet-riddled with quick-fire vignettes. Maybe, as Johnson suggests in the inaugural episode of Crossfade, that style is due in part to his growth in the internet age, where attention spans are razor thin and consumers are rabid for new content.

To get to the bottom of it, our Sara Bertuldo — of Omaha’s See Through Dresses and Millions Of Boys — enjoyed a drink with Johnson at nearby Reverb Lounge before Joyce Manor’s set. They chatted about writing songs for (and with) short attention spans, Johnson’s first rock ‘n’ roll moment, and finding inspiration in strange places.