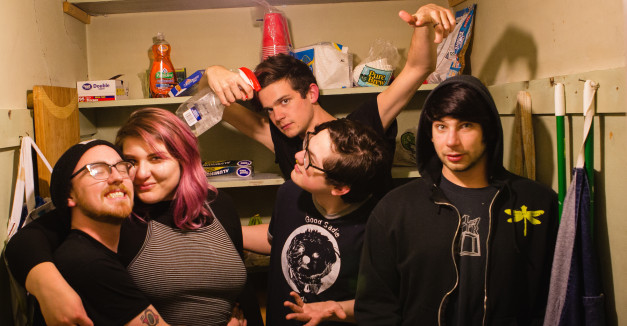 Kississippi’s story reads much like one of those weird hookup tales gone right.

In August 2014, Zoe Reynolds recorded a lo-fi, dreamscapey EP in her laundry room, with the intent on performing as a solo artist. Zoe’s current musical partner, Colin Kupson, moved to Philadelphia soon after to attend The University of Arts.

It was the popular dating/hookup app Tinder that brought them together.

“We hung out talked about music stuff and we were like, ‘Maybe we should start a band together,'” Reynolds says. “If you are in a city where there’s a thriving music scene, Tinder is a really good place to find bandmates.”

As a two piece, Reynolds and Kupson set about creating dark, moody arrangements that fused their respective songwriting styles: Zoe’s, an adrift introspection; Colin’s, an “amp-worshipping,” hardcore-inspired electrical march. In early 2015, they took the six songs that would become Kississippi’s label debut We Have No Future, We’re All Doomed to Modern Baseball’s Jake Ewald. Already, they’ve garnered a bit of buzz from national outlets like Noisey and Stereogum.

Kississippi stopped at Lincoln’s SP CE Commons last week while on its current national tour, bringing a fleshed out lineup that takes its twangy, drifting indie ballads and blows them up into a flair of passionate guitar playing, Cranberries-esque vocals and glitter. The band sat down with I Forgot To Love My Father’s JP Davis at a Near-South house post-show to explore Reynolds and Kupson’s unorthodox meeting, their musical experience as it relates to the movie Speed and some of their most personal secrets via a handmade “cootie-catcher.”

See it all in the latest episode of Crossfade: