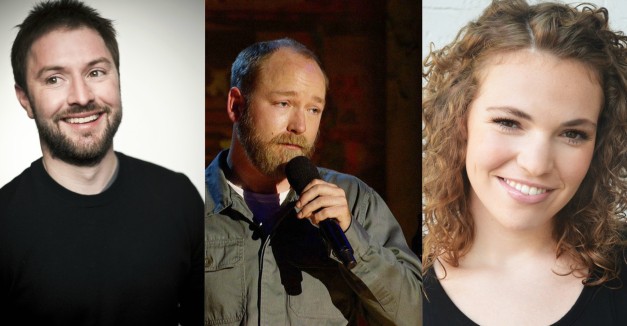 Crom Comedy Festival — billed as a yearly alternative stand up comedy festival — is back in Omaha this May for a third time. No, you won’t see Louis CK at Crom. And that’s the point.

Drawing nationally-known comedians such as Denver’s Adam Cayton-Holland (as seen on the Nerdist and Conan), Los Angeles’ Kyle Kinane (Comedy Central) and Amber Kenny (Upright Citizen’s Brigade-LA), Crom showcases plenty of polished touring acts. But its focus on local comedians is strong, and comes from an idea likely familiar to many Nebraska music fans.

My first punk show was Dillinger Four at the Cog Factory in Omaha. I was fifteen, and remember little about the show outside of feeling intimidated by how vastly more cool the rest of the audience seemed than me. But aside from wide-eyed stare, one of the few things I do remember was a quote from Paddy, D4’s bassist, talking about how you build talent, and make a place thrive: “You don’t leave to New York or LA. You build it where you’re from. You make your hometown better.”

Ian Douglas Terry was there playing in an opening band that night, and I can’t help but think that quote stuck with him, too.

Because that sensibility, of building it where you are, is what Crom Comedy Fest is all about, according to festival organizer and Omahan-turned-Denver resident Terry. And for the first time this year, Crom’s expansion to four Denver dates (dubbed “Crom West”) is a reflection of that idea.

Check out the full lineup of comedians for the Omaha and Denver shows at www.cromcomedyfest.com. Find embeds from a sampling of the comedians throughout the story.

I caught up with Terry this last week through email to talk about supporting local talent, losing money and Conan the Barbarian.

Hear Nebraska: I feel like Crom came out of a certain aesthetic or philosophy for you. Is it pretty important for you to do a DIY comedy festival?

IDT: It definitely has a party/DIY philosophy. We want to create an extended community of cool DIY comedians and this is the best way to get people together in one place and help friendships blossom. In that way it is a lot like the punk scene of meeting bands from different places and using those contacts to tour. I grew up in the DIY punk scene, so it is completely ingrained in me and everything I do. I think people assume then that festivals are easy or a shortcut to legitimizing a scene or to be friends with bigshots … it isn’t. Years of work were put into making the Omaha scene great and making it a place that bigger comedians really wanted to come out to. Not a lot of people are putting in any of that work these days and just throwing the word “festival” on anything. We hemorrhage money every year and I spend months upon months of pre-work. It isn’t easy or always fun, but it is worth it to put a spotlight on the cities and scenes that I love. The partying comes after the work … and the festival itself is the most fun and when it’s over I get to relax for a few months and work on the other festivals I’m booking.

HN: How did the idea for Crom get started?

IDT: We definitely didn’t just wake up one day and say, “Let’s spend all of our money and be stressed out for a few months.” It was a culmination of the growth of the Omaha DIY comedy scene, the support of venues like The Waiting Room and O’Leaver’s, and attending The Fest every year in Gainesville, Florida. Being at The Fest and seeing how Tony [Weinbender] grew a small punk festival into an amazingly huge event was inspiring. Seeing what Saddle Creek and One Percent Productions did in Omaha to support/grow the local indie scene was inspiring. Getting emails from comedians I admired insisting that we help them get a show in Omaha because they had heard so many awesome things was inspiring. We put all of that together, emptied our bank accounts, and just worked our asses off to make it happen.

HN: Who are you most excited to see?

IDT: There are a ton of new faces to Crom that we learned about through submissions that I’m excited to see for the first time. I’m still a huge fan of comedy and pay attention during shows like a nerd (the shows I make it to, I missed half of last year’s Crom). Mega excited to bring James Adomian to Omaha because he was born there, and he’s also one of the most inventive and hilarious people out there. He was in David Cross’s new movie — that’s insane. Nate Bargatze is only in town for one night (Friday) and he’s absolutely one of the best stand up comedians working today. He’s a “can’t miss.” The lineups this year are loaded and full of some of the best known and not very well known comics in the U.S. You could pick any one show and you will lose your mind laughing. Also excited that we had a request for an ASL translator for the “Competitive Erotic Fan Fiction” show … working on making that happen because that would add another insane level to that already super funny show.

Sunday night at The Waiting Room and Reverb Lounge

HN: Some read “local comedy” and get a certain image or style in their heads. Why should I go to Crom if I’m not into local comedy?

IDT: People should be into local comedy, and it blows my mind when people aren’t. You can’t have an expectation that all comedy is going to suit your sense of humor or be 100 percent professionally polished. All of the hotshots on Comedy Central and TV shows started in local scenes and grew into comedy behemoths. If your favorite comedians are arena comics, then you’re the musical fan equivalent of a Coldplay fan. More indie and punk people should be out supporting DIY comedy. Find the cool shit in your town and treat it like the cool local band you’ve been following for years. Watch it grow, be a part of something awesome.  Plus, we are endorsed by the dudes in Cursive … do you think you have better taste than Ted Stevens? Get real. Honestly though, local scenes can only survive if people support them.

HN: How has your move to Denver changed how Crom is put on in Omaha?

IDT: I’m just getting high in the mountains every day and doing yoga poses in Instagram pictures. If anything it gave us the freedom to spread out comedians and expose both the Omaha and Denver scenes to new comedians. That’s what it is all about. Shining a light on the things you love and making all of your friends be friends with each other. That’s how communities grow and prosper.

HN: What’s your ultimate dream for the festival?

IDT: I love the idea of having a Crom Fest pop up in different cities each year, with Omaha being the mothership.  We are already talking to some pals in Atlanta about having a Crom South next year out there.  They have such an amazingly talented and underrated scene…bringing the Crom party there would be an honor.  We also joked about eventually doing something like the Warped Tour (barf)…where the festival itself tours around. That’s insane….so we will probably try and do it in a few years and I will lose all of my hair.

Sunday afternoon at O’Leaver’s, Sunday night at The Waiting Room

HN: Why is it called Crom, anyway?

IDT: Every show we name is always some kind of inside joke. Doom Room was the nickname of [a friend’s] first apartment in Omaha. Cool Shit was something we just kept yelling at a bar one night. When naming the festival we didn’t want to call it “The Omaha Comedy Festival” … because then every single comedian in Omaha would feel entitled to be a part of it or represented by it regardless of if they actually supported it or deserved to be there. “Benson Comedy Festival” would have just made a comedian sue us. So we landed on “Crom Comedy Festival” because it is Conan The Barbarian’s god (which is tight), and also was our code word for marijuana for like a week. Now, you’ve seen behind the curtain and it is all just drugs and ding-dongs.