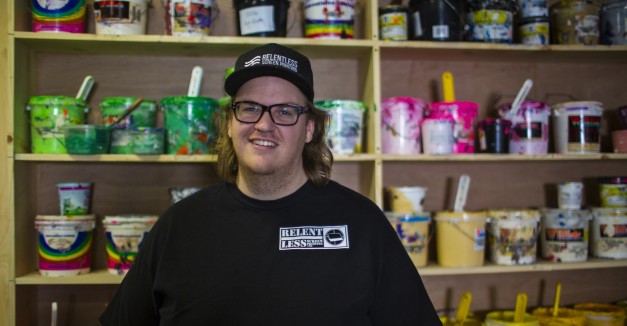 If you ordered the critical events in Lighthouses’ five-year history, doing so by the tone change in Nathan Richardson’s voice would yield a flat plane. Even as he describes what was arguably the Kearney hardcore band’s most important moment, in 2013, it’s like marking a rainy Wednesday off a monthly calendar.

As a five-piece, Lighthouses recorded LP Black Letter Day in January of that year, and struck out on its most ambitious touring venture yet, hitting more than 30 cities from late May to late June. It returned $1000 in the black and devoid of merchandise, having moved all 200 shirts from it’s starting cache.

“It was a surreal thing,” Richardson says, as if just now realizing in the present. “We were kinda climaxing there.”

For a band independently touring out of the Midwest, facing common obstacles like worthless vehicles and unreliable venues, staying visible is the best way to build momentum. For an independent band, it’s hitting the same cities on the DIY circuit every three to four months.

Richardson, long a concert promoter in the Kearney area, used most of his connections to chart a nearly-unreplicatable route, spanning from New York City down to Florida and back. When a former guitar player quit following upon the band’s return, almost everything was undone.

“We weren’t hitting that same city because Daytona is 30 hours away,” Richardson says. “It was basically impossible to make that work.”

Over the Monday afternoon din of study groups and espresso machines at Lincoln’s Coffeehouse, an eavesdropper might have taken Richardson’s dispiriting tale for a recounting of light spillage at yesterday’s afternoon tea. Maybe it’s the cozy public setting that causes Richardson’s voice to soften like the sting of tough memories.

More likely, it’s the fondness and graciousness with which he recalls them. Wearing a black cap and jacket emblazoned with his screenprinting company’s “Relentless, Inc.” logo, he lights up at certain points: visiting Daytona Beach for the first time; weekend trips to play with Fargo, N.D., buddies Tiny Moving Parts and Swing Low; receiving his first Black Heart Booking handbill. But they’re all treated with the same sheen, glazed into the Lighthouses mosaic timeline for a nosey historian to tease out.

Verbally and non, he ascribes more importance to the moment the mostly Lincoln-based band finds itself in. Lighthouses plays Kearney’s VFW Friday night in celebration of its five-year anniversary, for which it’ll be joined by Colorado Springs, Colo., band Tigerwine, Lincoln’s Mad Dog and the 20/20’s and Kearney’s Cruz Control (RSVP here).

Five years is a pivotal time for any band, he tells me, and by what follows you can tell he’s serious. Lighthouses has survived all of the common bumps and bruises, including lineup changes and a near breakup after year one. With most of its members working full time jobs, touring and playing now becomes a carefully plotted chart by necessity.

“I think that’s the way we’re gonna keep doing it, because that’s tangible,” Richardson says, describing the way his band made due after its late-2013 letdown. “We’d do 30 day runs and then have three or four shows that would just be crap. Now we have to book 7 days of good shows.”

Besides, he has the screenprinting business to look after, the castle built on the solid foundation years of DIY touring can provide and the reason he moved up to Lincoln six months ago. What started as side-project and a way to save money on the band’s own merch has since grown exponentially, from four stall garage to 2,000 square-foot warehouse.

Aside from in-town clients like No Tide, Better Friend, Evan Bartles and Iron Brush Tattoo, he prints for old friends and connections like Comrades, Tigerwine, New Heart and Withered Bones. Most of his business is out of state, and that’s where Richardson really beams. The connections he made never really faded, even as road success once did. He cites others like Tiny Moving Parts, who used to play his house in Kearney, or My Iron Lung, now signed to Pure Noise Records. As he tells it, watching those bands thrive has been his greatest memory.

“The coolest thing about being in this band for five years is having a lot of friends that have succeeded and gone to the next level,” Richardson says. “It’s nice to feel like you’re a part of them succeeding.”

After this weekend’s show, Lighthouses will get back to it in 2016. Richardson says the band has found the perfect addition in Super Ghost guitarist Jake Newbold. They’ve planned a handful of January shows, a tour in March and an EP at some point (“I think I told the Kearney Hub that we’re gonna put out an EP next year so we should probably put out an EP next year.”) Maybe everything works out as planned and maybe it doesn’t; that’s all part of the process.

“There’s so many times in our band that we crashed and burned, with recording and doing things cheap,” Richardson says. “Putting out our album cheaply, or [buying] cheap van. I think the formula is crash and burn 100 times before you make it work.”