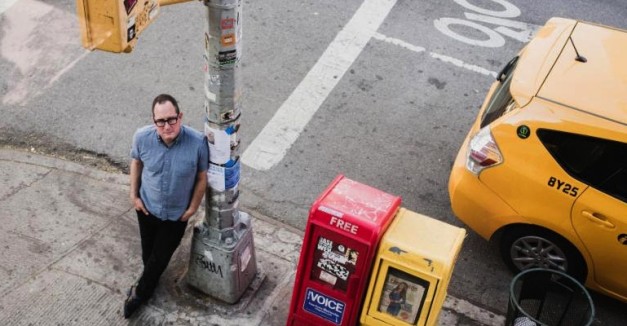 For years, Craig Finn has projected the air of a tent revival preacher. Fronting The Hold Steady since 2004, Finn espouses his characters’ small hopeful and redemptive moments through a dim view of Amercanism. In Finn-penned tracks, cities are sinful, roads are running away and dark bars are confessional booths. Forgiveness, then, is validation.

From stage, he has often matched the band’s bombastic, anthemic energy with his own flailing arms and wild eyes, an urgent and deranged sincerity coursing through his veins.

Lately, though, the minister has been practicing with a little intimate restraint. With two full-length solo albums — Clear Heart Full Eyes (2012) and Faith in the Future (2015) — Finn taps into a quieter and more personal vision of his characters’ dramatic, and often defeating, arcs.

“The (Hold Steady) music is so big, I feel like I have to write things that are bigger in terms of lyrics,” Finn says from the phone before a show in Athens, Georgia. “With solo stuff, I feel like I can be more vulnerable. I can let a little more of myself in.”

Right now, Finn is on a 26-stop tour with Brooklyn-based punk rock band Titus Andronicus. They roll into Omaha on Friday for a show at Lookout Lounge with Gordon and Universe Contest (RSVP).

On Faith in the Future and companion EP Newmeyer’s Roof, released last week, Finn refers to the vulnerability as emotional hangovers after periods of change. Ten years ago, on The Hold Steady’s essential and grandiose Boys And Girls in America, Finn was closer to chronicling how to get those hangovers. It’s as though the characters who, in Hold Steady tracks, were drinking and snorting on the banks of the Mississippi River have aged up a decade.

Ten years later, Finn finds them weighted anxiously with the consequence of decision, searching for answers in the wake of tumultuous personal history.

Finn wrote the bulk of the songs on Faith in the Future and Newmeyer’s Roof shortly after his mother’s death several years ago, when he himself was coming to terms with change and loss. He says it was the productivity that helped him move forward.

“The process itself, you show up and you do your thing,” Finn says. “You put work in.”

That same idea drives many of Finn’s characters, stumbling toward small glimmers of hope through an anxious and fearful post-9/11 America. Faith in the Future was released on Sept. 11 last year and features direct references to the date in 2001. In that way, while the album and the EP may feature characters just barely emerging from the darkness, the releases are not without a sympathy for humans and the trials we endure, especially at the hands of our former selves.

The tracks are perhaps at their bleakest, most resigned on the horn-flourishing “Roman Guitars.” After a robbery and America’s “blistered feet…depression and defeat,” the best you can hope for is that “all your little molecules add up to something beautiful.”

Or on “Maggie I’ve Been Searching For Our Son” about a man driving around the southwestern United States in search of a lost son. The quest doubles as a search for a savior and, while his endless cruise through decades of history — a movie theater shooting, the 1993 raid of a Waco religious compound, a cult leader deep in the desert — seems aimless, even fatalistically forlorn, he’s ready to accept peace at the end of his life.

Where many Hold Steady songs, particularly from Separation Sunday (2005) and Boys and Girls in America, feel as though they orbit around each other, calling on the same characters, settings and phrases, Finn’s solo work is more isolated. Like the characters, these songs do not bounce off each other. They exist in the lineage of Raymond Carter and Arthur Miller — characters living out small American tragedies, searching for respite.

And while no one will be drawing maps based on the real places referenced here, Finn sees his focus on the minute as a less expansive, yet equally worthy pursuit.

“When someone is particularly anxious or disenfranchised, whatever it may be, you’re saying ‘Hey, I know this feeling,’” Finn says. “‘I feel it too sometimes and you’re not alone.’ It’s acknowledging parts of our human experience in a way that hopefully makes people feel better in some way.”

That might be the best fruits of Craig Finn’s religious labor, of which there is plenty on Faith in the Future and through his body of work. It manifests itself in a preoccupation with Catholic imagery and christlike figures and, of course, redemption arcs. These may be specific personal touches for Finn, who was raised in the church and has said he has re-embraced its culture in adulthood. But for an agnostic listener, it’s more of an insistence that these isolated catastrophes born by sin may have their isolated saviors, too.

On “Sandra From Scranton,” that savior is as simple as night out dancing. On “Trapper Avenue,” it’s choosing to make the first step away from repetitive and destructive lifestyles.

The hope for salvation stems from a sense of mystical reality that permeates each song — as long as anything can happen, nothing is hopeless.

Even when you’re adding up a decade’s worth of missteps or getting high in a dark booth, The Travelling Church of Craig Finn implores you — have faith.

There will always be redemption.