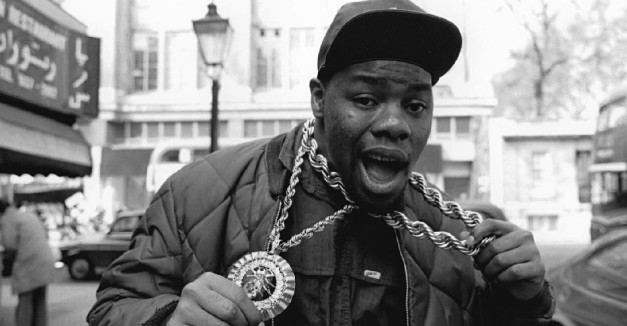 The east wall of Carver Bank is lined with portraits of hip-hop luminaires. Big Daddy Kane is there, Flavor Flav, LL Cool J. The photographs are Janette Beckman’s.

Perhaps the most striking of the group is near the end of the North Omaha building’s wall. It’s Ice Cube, age 21, looking angry, but also a little mournful, a youthfully handsome face shrinking back into a large hood and L.A. Raiders cap. Beckman took the photo on his mom’s porch. Moments before he pointed a menacingly earnest finger at the camera, she’d just photographed Ice Cube embracing his mother.

What’s special, but hard to define, about the picture twenty years later is its vitality. Coors Light commercials, awful big-budget movies and dozens of album covers: Everyone now knows what Ice Cube looks like, and so does Ice Cube. But Janette Beckman caught him at a moment when he perhaps didn’t, young and vulnerable, passionate but unassuming. Beckman remembers he was in an emotional place at the time, barely removed from leaving N.W.A.

“People right now, because of the internet, MTV, selfies, are a lot more aware of the way they look, which is kind of sad,” says Beckman, the current artist-in-residence at the Bemis Center for Contemporary Arts in Omaha. “It’s almost like people are practicing in the mirror. It’s hard getting a natural photo of somebody now.”

The old school hip-hop photos are part of a dual exhibition, dubbed “Rebel Culture,” Beckman is holding at Carver Bank tonight for Third Friday. The reception will run from 6 to 8 p.m., and Beckman will speak, as well. On the opposite wall, is a collection Beckman photographed last summer, a Harlem biker group called the Go Hard Boyz.

As part of her month-long residency, Beckman has been at work on a portrait collection of contemporary Omaha, as well as collaborating on workshops for North Omaha teens with spoken word poet Felicia Webster.

In her career, the London-bred, New York-dwelling Beckman has stood at and captured the forefront of two massive counterculture movements, English punk in the ‘70s and American hip-hop in the ‘80s. A look back through her full body work shows Boy George, the Sex Pistols, Salt-n-Pepa, The Ramones and countless more. She’s also done magazine portraits of people like Madeleine Albright and Martina Navratilova, and album covers for bands like The Police.

Knowing nothing about Omaha, Beckman made her residency decision on a lark last winter when she connected with Bemis’ Amanda McDonald Crowley at a show in New York.

On Thursday, when we meet at Carver Bank on 24th and Lake streets, Beckman is holding a conversation and snapping a few casual photos of a passerby and the owner of a barbershop around the corner. She met him minutes before dropping off flyers for the exhibition at his shop. In his 12 years of owning it, he’d never made the 50-yard trip to Carver Bank. It’s a small but oft-earned victory for Beckman in her lifelong quest to explore, illuminate and connect subcultures. On her blog, you can see some of the work Beckman has done in Omaha so far, shooting a Labor Day Parade, a neighborhood barbeque and a Pow wow. She expanded the scope of her project from North Omaha to the city at large when she says she found the the neighborhood surrounding Carver Bank relatively quiet and the streets empty.

Beckman says in her current documentary portrait work she’s trying to answer the question, “Who are the real Omahans?,” and she’s attracted by what she sees as a certain aesthetic traditionalism she doesn’t find at home in New York.

“I’m not saying you’re not forward here, but it’s something like I imagine Americana from the ‘60s is like. It has that flavor.”

Moreover, as her work with hip-hop and punk subcultures would indicate, she’s seeking a cultural mosaic outside of commercial centers.

“People have said, ‘Why don’t you go take pictures on the Old Market?’ No! I mean, It’s nice there, but it seems a little rarefied,” Beckman says.

Just as with the newly acquainted barber and the steer wrestler she’d photographed earlier that week in Hebron, Neb., Beckman must constantly ingratiate herself with her subjects in a friendly and respectful way. When it came to photographing the Go Hard Boyz last summer — at which point she found her sitting in the bed of a Ford pickup while it sped along side the wheelie-popping bikers — she chatted with the bikers for several hours, taking along her hip-hop pictures as a point of mutual interest.

“[As a British woman], people don’t judge you,” she says. “They don’t really know who you are. I’m not a white American upper class citizen who’s going to have some attitude about what people do.”

As an artist who both attempts to portray people in their natural states, as well as someone who’s shot professional magazine portraits, Beckman describes her process as wholly collaborative.

“I always want to go where people are, and shoot them as they are,” she says. “People are amazingly open if you treat them well.”

And this trust-building comes in significant handy given that the countercultural movements she’s documented find their core values in distrust of establishment. She describes the punk of her youth as coming along at a dark economic time, an age-old British class system taking its toll.

“Everyone had been sitting around moaning in pubs for years, and the youth, finally they got sick of it,” she says.

Then, serendipitously arriving in New York in 1982, she found herself at the dawn of another movement in opposition to systematic (and racial) oppression.

“I think people who are struggling, and struggling to make art, make better art,” Beckman says. “The looks, the styles, the haircuts, they were all homemade. Mohawks in the kitchen with glue. People were walking around in garbage bags in London. You could be fat, thin, covered in zits. You were still cool.”

As for whether any music photography is on tap during the remainder of Beckman’s stay in Omaha, she says she met Saddle Creek owner Robb Nansel, and serendipitously, her friend Melinda Kirwin, of the Australian band Falls, is currently recording at ARC Studios.

But time in Omaha is winding down, and Beckman says she’ll have to pick and choose assignments carefully. She says she’d very much like to shoot an upcoming rodeo, but rest assured she’ll go where the people of Omaha lead her, flexible and adaptable.