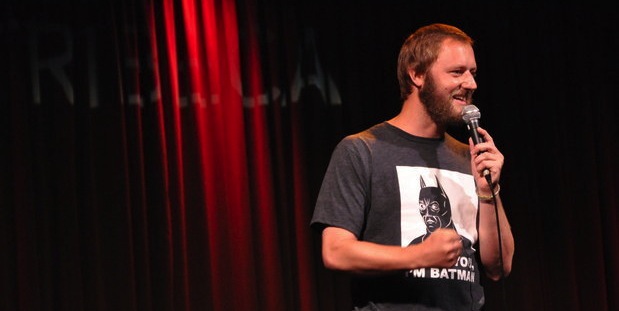 As a stand-up comedian, Rory Scovel mixes the perfect blend of great joke writing with quick and constant improvisational wit. The first time I saw him live was at Brothers Lounge, where he performed a set that included as many prepared jokes as it did on-the-spot material about the venue itself.

Most of us have friends who never shut up about that one concert or sporting event that changed their lives and for so many Omahans who saw Scovel that night, this was the comedy equivalent of that. As a comedian, it either made you want to keep doing comedy forever in the hopes of reaching that level one day or quit, confident in the knowledge you would never be that good.

Scovel, one of the greatest minds in stand-up, is coming to Omaha next week for two performances at O’Leaver’s Pub. You probably know him from his multiple appearances on Conan or from his hilarious acting on the TV shows “Those Who Can’t” on truTV and “Ground Floor” on TBS. He’s also worked behind the scenes as a writer for the Eric Andrew Show on Cartoon Network, but I hesitate to call him a triple threat because he’s way too nice to make threats.

Because of his improvisational background and use of character voices, every time Rory steps on stage his act feels brand new no matter how many times you’ve seen him perform. Fans who decide to see him both nights at O’Leaver’s will likely be treated to two entirely different shows and as a bonus, anyone who sees him on night one will get a half price discount to see him the second night.

I corresponded with Rory over email for the following interview and in the hopes that readers finish the whole thing, I put the questions about drugs at the end.

Ryan de la Garza: The last time you visited Omaha was in 2014 when you performed at the 2nd annual Crom Comedy Festival. Is there anything you’re looking forward to doing again upon your return to the city or something you missed last time around that you hope to experience while you’re here?

Rory Scovel: I’m just excited to be back in a fun city. The two times I’ve come through town I’ve loved hanging out with the comics and just seeing Omaha in general. The shows have always been really fun so I’m for sure looking forward to that.

RG: O’Leaver’s seems to have become a favorite spot for touring comedians over the years. What about that bar, which mostly features live music, appeals to stand-up comics? What made you want to do a double-header there instead of a more traditional performance space devoted specifically to comedy?

RS: I think O’Leaver’s has a genuine personality as a performance venue. You can tell the people that run it and work in it really respect what it is and want to maintain that. I think that translates to any live performer because when you’re in a venue like that you want to give back to it. You want to have a fun set that mirrors the relaxed vibe of the place. I like playing a venue like this because I intend to shoot a special later this year in a similar venue.

RG: You’re a former collegiate-level, multi-sport athlete from South Carolina. Is it a coincidence that the dates you’re in town — June 27-28 — line up with the finals of the college world series and that there’s a team from Conway, SC (Coastal Carolina) in the tournament?

RS: I think that is all just coincidental. I don’t have too many open dates for shows this summer and that particular Monday and Tuesday worked out best to perform.

RG: In reference to your January 7, 2016 appearance on Conan, a commenter on imdb.com interested in your health noted that, “For the first time he didn’t look like a (sic) unkempt slacker with a beer gut.” What are you doing these days to keep in shape? Does your fitness routine change at all when you’re on tour?

RS: Gotta love people who take the time to leave comments. We live in such a perfect world now don’t we, where perfect people can tell us what they think of us. I really love it. I actually started reading a lot of comments on youtube and such and realized that if I didn’t fix my health now I’d end up looking like some of the people that sit around and leave their opinions on videos. So I stopped eating meat and eating less sugar and drinking less beer.

RG: You’ve said that comedians should put in at least three years of work in their local scene before moving to a bigger city. Are there any specific goals within that time frame you think they should aim for as well?

RS: I think just learning how to do what they do and figuring out how they enjoy it. I think this job is fun because like other art forms there is no blueprint on how to succeed or how to enjoy it. Playing huge shows or small shows, you never know which ones you’re going to enjoy. You would think the bigger stages are more fun but that isn’t always the case.

RG: Similarly, do you think there is a certain number of years or types of experiences a comedian should have prior to recording and releasing a first album?

RS: I think if they feel as though they have a solid hour then go for it. I don’t think there is any specific time frame for that stuff. I think some people rush into it and I’ll never understand that. I think taking time to put a product together that you really like translates to the audience.

RG: In past interviews you’ve mentioned that in addition to acting you have a desire to write and direct movies as well. Are there any film projects currently in the works in which your fans will get to see you take on these other roles?

RS: In January of next year I will appear in Demetri Martin’s movie Dean. I don’t know much about the release of it but I’m pretty sure it’ll be around January and on 75 screens nationwide to start.

RG: You’ve spoken before about using hallucinogenic mushrooms. Many people I know who enjoy their effect – including myself – have certain rules or specifications for when they trip, such as turning off their phones and going outside to be in nature. Is there anything you prefer to do before or during these experiences to ensure they go as well as possible?

RS: I now prefer to be floating in a tube down a river. That has been the absolute best experience I’ve ever had with mushrooms. I prefer to avoid phones and anyone I don’t really know that well. Also fewer people the better. Fewer people and def. outside all the time.

RG: It would be breaking all of my rules, but will you go to a College World Series game with me on mushrooms?

RS: I would have a breakdown and run into the parking lot covered in blood.

RG: What’s your current status with marijuana? I’ve heard that you no longer perform high, but in the past you’ve said that your imagination is more active and you’re more confident to totally commit to an idea in that state of mind. If it’s true that you no longer smoke before going on stage, would you say it’s because you eventually found a way to do those things without chemical assistance or did you have that thing happen where you grew out of the ability to have fun while high and now you just get paranoid every time you smoke?

RS: I think it’s lots of things. I prefer performing high. It’s the most fun for sure. I stopped after my wife had our baby and then I just stayed off of it. Not entirely though. I still go back and forth performing on it.

RG: Is there anything you’d like to say to your Omaha fans who plan to catch both of your performances next week?

RS: I’m trying to figure out how to make up most of the show as I go. I have the hour ready for the special and so begins my effort to not have to use any of it. Come out, have fun, be a good energy and watch a fun show.

Ryan de la Garza (@ofthegarza) is a stand-up comedian living in Omaha. He hosts monthly comedy show You Had to Be There (@Had2BeThereShow) at Lookout Lounge. It was recently featured at the Bridgetown Comedy Festival in Portland, Oregon.